More useful projections of sea level are possible despite substantial uncertainty about the future behavior of massive ice sheets, according to Princeton University researchers.

In two recent papers in the journals Nature Climate Change and the Proceedings of the National Academy of Sciences (PNAS), the researchers present a probabilistic assessment of the Antarctic contribution to 21st-century sea-level change. Their methodology folds observed changes and models of different complexity into unified projections that can be updated with new information. This approach provides a consistent means to integrate the potential contribution of both continental ice sheets — Greenland and Antarctica — into sea-level rise projections.

"Furthermore, there are fundamental limitations in the observational data available on and near ice sheets," Little said. "Projections of their response to 21st century climate changes are thus very poorly constrained. There's unlikely to be a single answer in the near future: a better objective is a comprehensive, transparent baseline that can be improved over time."

The Princeton approach provides a more informative projection of future sea levels that politicians and coastal planners can use to prepare for higher seas, said Little, who works in the group of co-author Michael Oppenheimer, Princeton's Albert G. Milbank Professor of Geosciences and International Affairs. Little and Oppenheimer worked on both papers with Nathan Urban, a former postdoctoral researcher with Oppenheimer now at the Los Alamos National Laboratory. 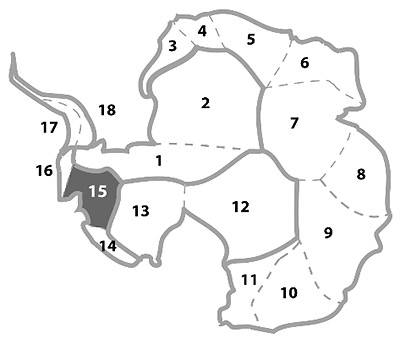 In two recent papers, Princeton University researchers present a probabilistic assessment of the Antarctic contribution to 21st-century sea-level change. Their methodology provides a consistent means to integrate the potential contribution of continental ice sheets such as Greenland and Antarctica into sea-level rise projections. In existing projections, the contribution of Antarctica to future sea-level rise is almost entirely derived from locations where present-day mass loss is concentrated (area 15, above). This is despite evidence that future discharge in other drainage basins — which comprise more than 96 percent of the ice sheet's area — remains uncertain. (Image courtesy of Christopher Little)

Little explains the findings of both papers as follows:

"Gauging the future rate of sea-level rise is critical for climate-change policy and coastal-planning efforts. One crucial component is the melting of polar ice sheets.

"During the past 20 years, the Greenland and Antarctic ice sheets have lost an increasing amount of ice and now contribute roughly one-third of the rate of global mean sea-level rise. However, the standard tools used to project these ice sheets' contribution to future sea levels are limited by inadequate process understanding and sparse data. Ice sheets interact with the ocean on small spatial scales, and their motion is strongly governed by poorly understood properties of the ice as well as the sediment hidden several miles beneath it. Sea-level rise projections should reflect these uncertainties.

"Recently, several groups have used alternative techniques to forecast maximum possible sea levels — known as upper bounds — that do not explicitly model ice dynamics. Upper bound estimates by the year 2100 projected using these techniques are up to 6 feet (three times higher than future sea level estimates from the Intergovernmental Panel on Climate Change (IPCC)). However, the physical basis underlying these projections and their likelihood of occurrence remain unclear.

"In our group, we think we can more consistently assess disparate sources of information. In two recent papers, we introduce a novel framework for projecting the mass balance of the Antarctic ice sheet that allows for the conversion of current and future uncertainties of ice-sheet dynamics into probability distributions that may be supplemented by expert judgments. The power of this framework arises from its ability to improve and compare projections in a transparent manner.

"Like watersheds on land, ice sheets discharge precipitation that falls over a wide drainage basin through relatively narrow outlets. Although ice flow is linked across basins, each basin may remain relatively independent over time periods less than a century. The framework described in these two papers projects mass balance separately for each drainage basin, while allowing for correlated trends driven by underlying physical processes occurring at larger spatial scales.

"The first paper, published in PNAS, introduces this 'basin-by-basin' framework and reveals that, even with limited information, a comprehensive probabilistic approach can provide insight that is missing from previous projections. We performed sensitivity analyses by changing the set of assumptions applied to each basin. For each set of assumptions, Monte Carlo simulations [computer algorithms based on random sampling] were used to generate 30,000 to 50,000 scenarios of mass changes originating from each basin and the continent as a whole.

"In previous scenario-based projections, the contribution of Antarctica to future sea-level rise is almost entirely derived from locations where present-day mass loss is concentrated. This is despite evidence that future discharge in other drainage basins — which comprise more than 96 percent of the ice sheet's area — remains uncertain.

"By incorporating the entire ice sheet, the PNAS study demonstrated that uncertainty in ice discharge outside regions where scientists 'expect' ice loss might result in additional sea-level rise that must be considered in projections. In addition, we quantitatively show that the likelihood of upper bounds must be taken into account when assessing their magnitude and appropriate uncertainty reduction efforts.

"The second paper, published in Nature Climate Change, extended the framework to include Bayesian updating, which allows prior assumptions to be updated as new data are collected. We combined model-based basin-level projections with data-based extrapolations and previously reported continental-scale observations to forecast the Antarctic contribution to sea-level change.

"The paper projected a 95th percentile ice-mass loss equal to a 13-centimeter (5.1-inch) increase in sea level by 2100; other estimates provide upper bounds reaching up to 60 centimeters (roughly 23.5 inches), but with no quantification of probability. This paper suggests that most earlier projections either overestimated Antarctica's possible contribution to sea-level rise; implied physical changes inconsistent with underlying methodological assumptions; or, assume an extremely low risk tolerance.

"Future work on this framework includes further addressing inconsistencies in different methodologies, which will continue to refine the range of upper-bound sea-level projections. Our group also intends to include the solid earth and gravitational response that modulates sea-level changes at the local level, allowing the generation of a global map of the local probability distribution of sea-level rise."

The paper, "Probabilistic framework for assessing the ice sheet contribution to sea level change," was published February 26 in the Proceedings of the National Academy of Sciences. The article, "Upper bounds on twenty-first-century Antarctic ice loss assessed using a probabilistic framework," was published online March 17 in Nature Climate Change. Both papers were funded by the Princeton Environmental Institute's Carbon Mitigation Initiative, and Princeton University's Program in Science, Technology and Environmental Policy.

Little is available to discuss his research with interested members of the news media and can be contacted at cmlittle@princeton.edu, 609-258-2392, or through Princeton University science writer Morgan Kelly at 609-258-5729 or mgnkelly@princeton.edu.