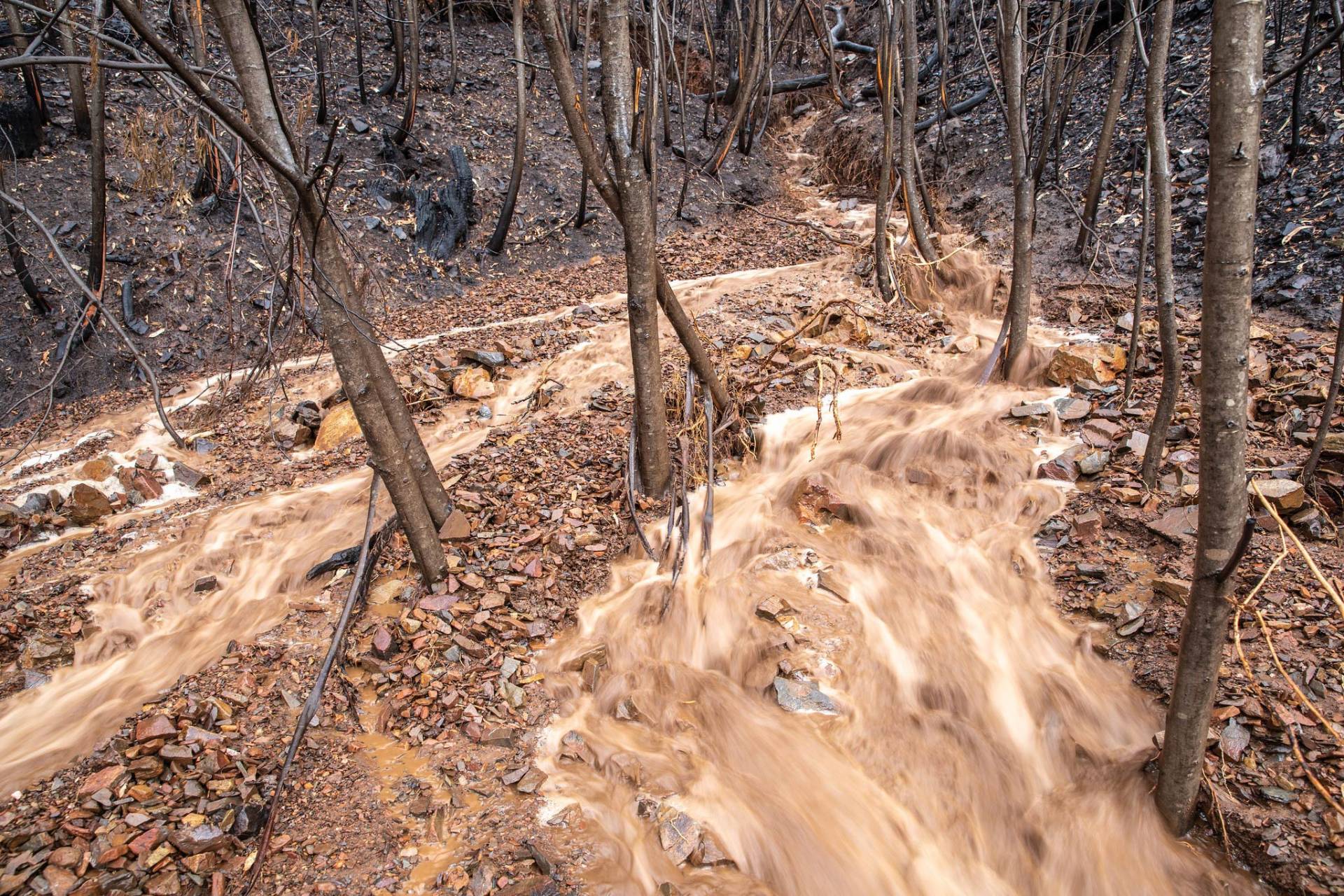 Rain causes flooding in a burned forest along the Benambra-Corryong Road in Victoria, Australia.

Like an undulating seesaw, weather in some regions swings from drought to heavy rain under the weight of climate-induced changes, according to an analysis published in Geophysical Research Letters. The study finds a link between droughts followed by heavy rain events, along with an increased rate of these extreme weather occurrences.

“Extreme dry and wet conditions are increasingly making global headlines. However, existing studies generally treat them in a separate way,” said study lead author Xiaogang He, who conducted the work at Princeton University as a Ph.D. student and is now a postdoctoral fellow at Stanford University’s Water in the West Program. “Their consecutive occurrence, especially in the same location within a short period, magnifies impact on local populations, and therefore deserves more attention.”

To examine this relationship, the researchers developed a framework to identify and examine historical long-term, large-scale dry and wet spells. Looking at both global rainfall and soil moisture data from 1950 to 2016, they detected drought and heavy rainfall occurrences at a regional scale. Then, they created a statistical model to identify whether a relationship existed between these two types of extreme events over the seasons.

They found that in the past seven decades about 11% of droughts globally have been followed by at least one heavy rain event in the following three months in a concentrated area or region. Notably, the Democratic Republic of Congo, Kenya, Brazil, Canada, Botswana, Iran, China and Myanmar had an average seesaw occurrence of over 25% during the study period, revealing an ongoing pattern of these linked harsh weather events in certain locations.

The team also identified regional “seesaw” hotspots — mainly in mid-latitude regions — that have experienced an increase in the frequency of droughts with correlating heavy rains following during the next season. These hotspots, which include Asia, Southern Africa and Oceania, have high poverty rates and populations more vulnerable to extreme weather.

“We know something about the individual risk of droughts and very wet events, but very little about how they compound each other,” said senior author Justin Sheffield, professor of hydrology and remote sensing at the University of Southampton. “This research is the first to look at this globally, to identify how much of a risk this actually is, and where it may be increasing.”

These extreme events often wreak havoc on agriculture, food and water security, energy production, infrastructure, and ecosystems. Identifying areas likely to have increased frequency of both drought and heavy rains, as well as the swing between the two, is important for disaster preparedness and can help aid organizations prioritize resource allocation such as food, water, shelter, or medical supplies.

As a warming climate elevates the likelihood of droughts and extreme rainfall in the future, human activity, such as increased water consumption, land-use changes, urbanization, and agriculture, could also force more rapid and violent transitions between seesaw events, according to the study.

The researchers also point out the U.S. is not immune to dramatic dry-to-wet-weather swings, citing the 2017 wet conditions in California which contributed to widespread floods after a multi-year drought. Across the state, thousands of people were forced to evacuate, while floods drowned crops, created mudslides, and caused over a billion dollars in road and highway damage alone.

A critical question they plan to investigate next is whether the increased frequency of these weather extremes is due to climate change, which could signal the potential for further extreme weather changes in the future.

He is also an incoming assistant professor in the Department of Civil and Environmental Engineering at the National University of Singapore.

Funding for this work was provided by NOAA grant NA14OAR4310218 and the Princeton Environmental Institute at Princeton University through the Mary and Randall Hack ’69 Research Fund. This work was also funded through the ‘Building Research Capacity for sustainable water and food security In drylands of sub-saharan Africa’ (BRECcIA) which is supported by UK Research and Innovation as part of the Global Challenges Research Fund Grant NE/P021093/1.

This story was adapted from a news release produced by Stanford University’s Water in the West Program written by Michelle Horton; with B. Rose Huber, Woodrow Wilson School, Princeton University.