Scientists at the Princeton Plasma Physics Laboratory (PPPL) and Princeton University have taken a key step toward a solution, as described in a paper published this week in the journal Nature Communications. In research conducted on the Magnetic Reconnection Experiment (MRX) at PPPL, the scientists not only identified how the mysterious transformation takes place, but measured experimentally the amount of magnetic energy that turns into particle energy. This work was supported by the U.S. Department of Energy's Office of Science. 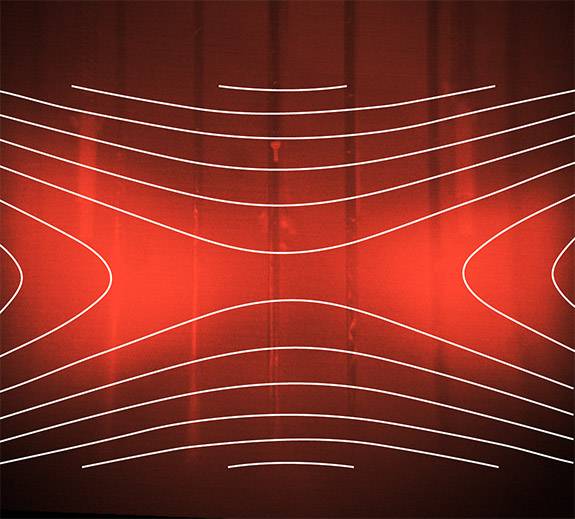 The new research shows that reconnection converts about 50 percent of the magnetic energy, with one-third of the conversion heating the electrons and two-thirds accelerating the ions — or atomic nuclei — in the plasma. In large bodies like the sun, such converted energy can equal the power of millions of tons of TNT.

"This is a major milestone for our research," said Masaaki Yamada, a research physicist, the principal investigator for the MRX and first author of the Nature Communications paper. "We can now see the entire picture of how much of the energy goes to the electrons and how much to the ions in a proto-typical reconnection layer."

The findings also suggested the process by which the energy conversion occurs. Reconnection first propels and energizes the electrons, according to the researchers, and this creates an electrically charged field that "becomes the primary energy source for the ions," said Jongsoo Yoo, an associate research physicist at PPPL and co-author of the paper.

If confirmed by data from space explorations, the PPPL results could help resolve decades-long questions and create practical benefits. These could include a better understanding of geomagnetic storms that could lead to advanced warning of the disturbances and an improved ability to cope with them. Researchers could shut down sensitive instruments on communications satellites, for example, to protect the instruments from harm.

Next year NASA plans to launch a four-satellite mission to study reconnection in the magnetosphere — the magnetic field that surrounds the Earth. The PPPL team plans to collaborate with the venture, called the Magnetospheric Multiscale (MMS) Mission, by providing MRX data to it. The MMS probes could help to confirm the laboratory's findings.

PPPL, on Princeton University's Forrestal Campus in Plainsboro, New Jersey, is devoted to creating new knowledge about the physics of plasmas — ultra-hot, charged gases — and to developing practical solutions for the creation of fusion energy. Fusion takes place when atomic nuclei fuse and release a burst of energy. This compares with the fission reactions in today's nuclear power plants, which operate by splitting atoms apart.

Results of PPPL research have ranged from a portable nuclear materials detector for anti-terrorist use to universally employed computer codes for analyzing and predicting the outcome of fusion experiments. The laboratory is managed by the University for the U.S. Department of Energy's Office of Science, which is the single largest supporter of basic research in the physical sciences in the United States, and is working to address some of the most pressing challenges of our time.