A tiny satellite under construction at the U.S. Department of Energy’s Princeton Plasma Physics Laboratory (PPPL) could open new horizons in space exploration. Princeton University students are building the device, a cubic satellite or "CubeSat," as a testbed for a miniaturized rocket thruster with unique capabilities being developed at PPPL. 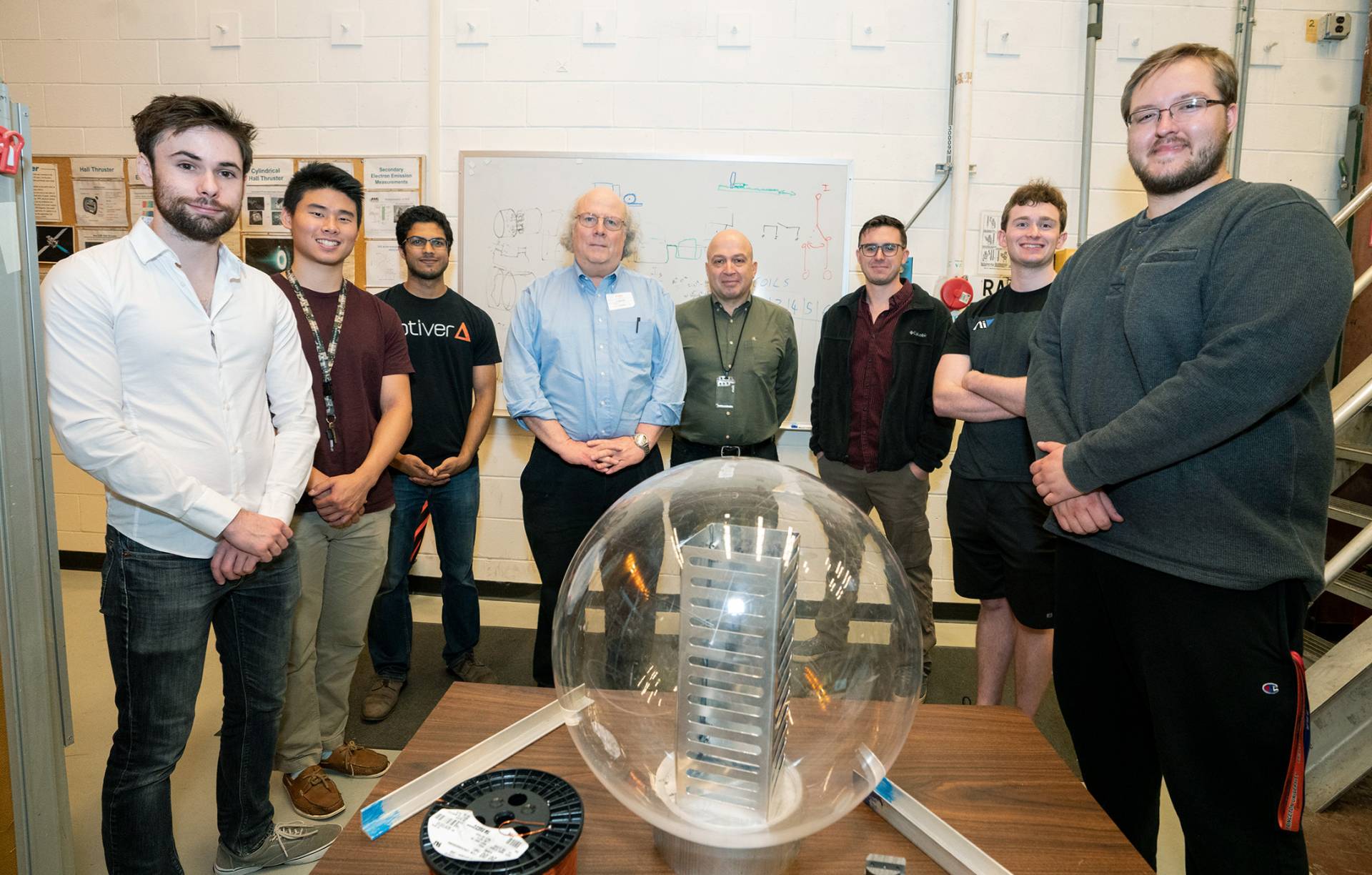 The CubeSat's thruster, whose development is led by PPPL physicist Yevgeny Raitses, holds the promise of increased flexibility for the tiny satellites, more than a thousand of which have been launched by universities, research centers and commercial interests around the world. The proposed propulsion device — powered by plasma — could raise and lower the orbits of CubeSats circling the Earth, a capability not broadly available to small spacecraft today, and would hold the potential for exploration of deep space.

“Essentially, we will be able to use these miniature thrusters for many missions,” Raitses said.

A fleet of CubeSats

One example: A fleet made up of hundreds of such micropowered CubeSats could capture in fine detail the reconnection process in the magnetosphere, the magnetic field that surrounds the Earth, said physicist Masaaki Yamada. Yamada is the principal investigator of the PPPL Magnetic Reconnection Experiment, which studies magnetic reconnection — the separation and explosive snapping together of magnetic field lines in plasma that triggers auroras, solar flares and geomagnetic storms that can disrupt cell phone service and power grids on Earth.

The miniaturized engine scales down a cylindrical thruster with a high volume-to-surface geometry developed at the PPPL Hall Thruster Experiment, which Raitses leads and launched with PPPL physicist Nat Fisch in 1999. The experiment investigates the use of plasma — the state of matter composed of free-floating electrons and atomic nuclei, or ions — for space propulsion.

A key advantage of the miniaturized cylindrical Hall thruster will be its ability to produce a higher density of rocket thrust than existing plasma thrusters used for most CubeSats now orbiting Earth. The miniaturized thruster can achieve both increased density and a high specific impulse — the technical term for how efficiently a rocket burns fuel — that will be many times greater than that produced by chemical rockets and cold-gas thrusters typically used on small satellites.

High specific-impulse thrusters use much less fuel and can lengthen satellite missions, making them more cost-effective. Equally important is the fact that a high specific impulse can produce a large enough increase in a satellite’s momentum to enable the spacecraft to change orbits — a feature not available on currently orbiting CubeSats. Finally, high thrust density will enable satellites to accomplish complex fuel-optimized orbits in a reasonable time.

These capabilities provide many benefits. For example, a CubeSat might descend to lower orbit to track hurricanes or monitor shoreline changes and return to a higher orbit where the drag force on a satellite is weaker, requiring less fuel for propulsion.

The foot-long CubeSat, which Princeton has dubbed a “TigerSat,” consists of three 4-inch aluminum cubes stacked vertically together. Sensors, batteries, radio equipment and other instruments will fill the CubeSat, with a miniaturized thruster roughly equal in diameter to two U.S. quarters housed at either end. A thruster will fire to change orbits when the satellite passes the Earth’s equator.

Building the CubeSat are some 10 Princeton graduate and undergraduate students in the Department of Mechanical and Aerospace Engineering, with Daniel Marlow, the Evans Crawford 1911 Professor of Physics, serving as faculty advisor. Undergraduates include Andrew Redd (Class of 2020), who leads design and construction of the CubeSat, and Seth Freeman (Class of 2022), who is working full-time on the project over the summer. Working on thruster development is Jacob Simmonds, a third-year graduate engineering student, whose thesis advisors are Raitses and Yamada. “This project began as a prototype of Yamada’s CubeSat and has evolved into its own project as a testbed for the plasma thruster,” Simmonds said.

Also under construction at PPPL is a test facility designed to simulate key aspects of the CubeSat’s operation. Undergraduates working on their own time are building the satellite and this facility. “To the extent that students and their advisors have identified well-defined questions associated with the TigerSat project, they can get independent work credit,” Marlow said.  “Also, some problem sets in the introductory physics course for undergraduates that I teach have questions related to the TigerSat flight plan.”

Simmonds, while working on the thruster, is drafting a proposal for NASA’s Cubic Satellite Launch Initiative that is due in November. Projects selected by the Initiative, which promotes public-private technology partnerships and low-cost technology development, have launch costs covered on commercial and NASA vehicles. Plans call for a TigerSat launch in the fall of 2021.

For Raitses, this project demonstrates the value of Princeton engineering students collaborating with PPPL and of University faculty cooperating with the Laboratory. “This is something that is mutually beneficial,” he said, “and something that we want to encourage.”

Support for the thruster work comes from Laboratory Directed Research and Development funds made available through the DOE Office of Science. Basic science aspects of the novel thruster based on low-temperature magnetized plasma is supported by the Air Force Office of Scientific Research. Princeton University supports construction of the CubeSat and the test facility.