Picture a swarm of autonomous, three-foot rolling robots armed with smart detectors to support nuclear safeguards and verify arms-control agreements. The prototype of such robots, being developed by the U.S. Department of Energy’s (DOE) Princeton Plasma Physics Laboratory (PPPL) and Princeton University, recently demonstrated the ability to identify the source of nuclear radiation and whether it has been shielded to avoid detection.

The detection of neutrons from a radioactive element in the PPPL test capped a two-year project funded by the U.S. Department of State that also contributes to the DOE’s Consortium on Verification Technology.  The remotely controlled prototype sets the stage for further development of a mobile and fully autonomous swarm. “The demonstration gave total confirmation of the ability of the robot to detect the source of neutrons and provided beautiful data,” said PPPL physicist Rob Goldston, a Princeton professor of astrophysical sciences and a principal investigator on the project. 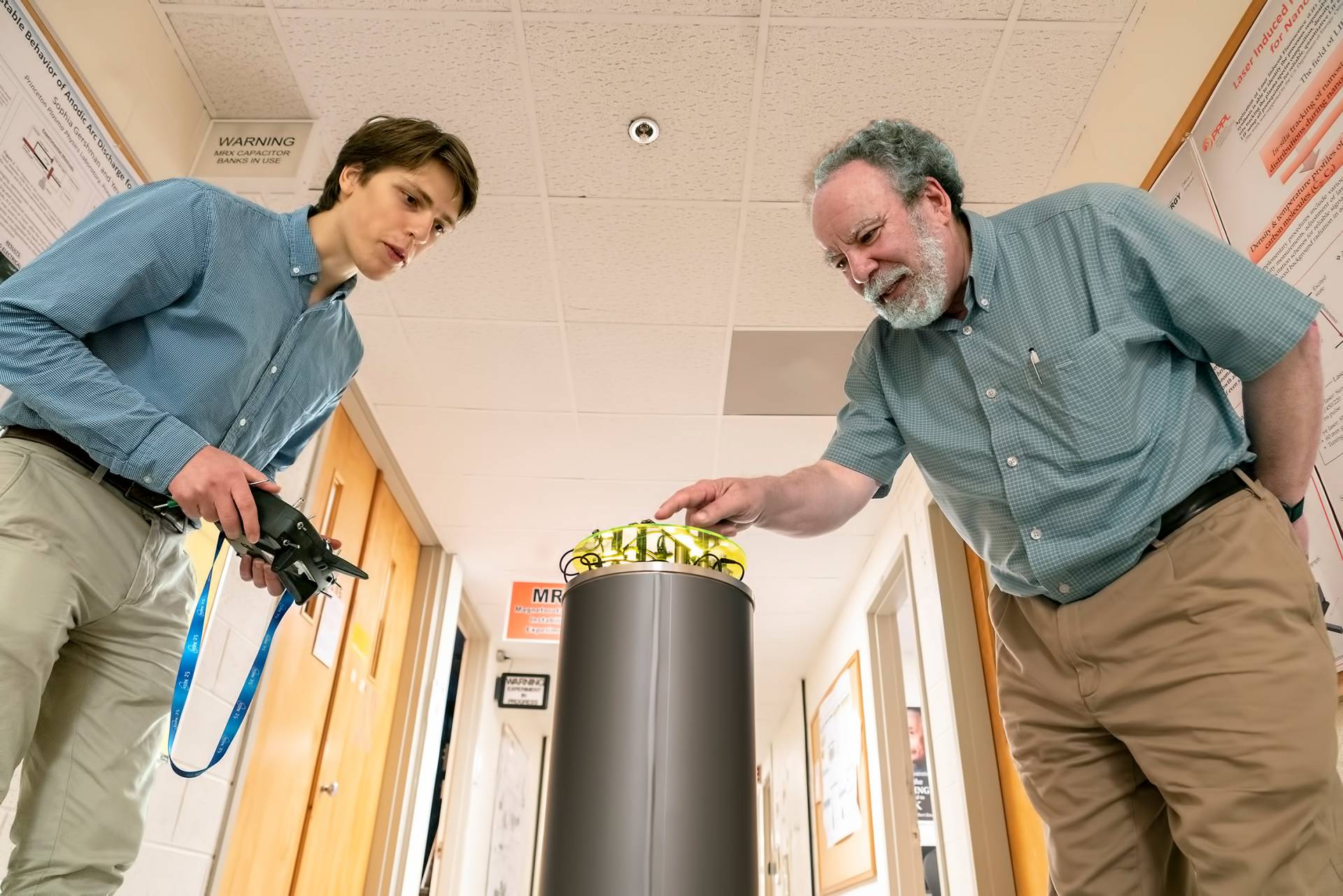 A prototype detector robot is set up in a hallway at the Princeton Plasma Physics Laboratory (PPPL) prior to a neutron test. The robots, being developed by researchers at PPPL and Princeton, recently demonstrated the ability to identify the source of nuclear radiation and whether it has been shielded to avoid detection. Shown from left: Harry Fetsch, science undergraduate laboratory intern, and Rob Goldston, co-principal investigator of the project.

‘Everything excellent and promising’

Co-principal investigator Alex Glaser, an associate professor of mechanical and aerospace engineering and international affairs who is co-director of the Princeton Program on Science and Global Security, was equally effusive.  “Everything we saw looks excellent and very promising,” he said. “PPPL provided great support for this project.”

The now-calibrated “inspector bot” consists of a cylinder of polyethylene plastic containing three neutron counters set 120 degrees apart and mounted on a robot with specialized wheels that enable it to move in any direction. The detectors, designed by Goldston and Moritz Kütt, a former postdoctoral Princeton researcher, provides both high sensitivity to the energy of detected neutrons and the direction from which neutrons are coming. Low energy could indicate shielding.

When fully developed the robot could become part of a swarm of devices that carry out inspection tasks in different types of facilities. Proposed applications could include:

• Safeguarding gas centrifuge enrichment plants, facilities that enrich uranium to fuel nuclear power stations. Such plants feed a gaseous form of uranium through centrifuges that upgrade it for later conversion to powder and insertion in fuel rods. Inspector bots could be used to detect undeclared withdrawal of highly enriched uranium from a fraction of the plant diverted to this undeclared use;

• The bots could further detect introduction of low-enriched, rather than natural, uranium into a slightly modified enrichment plant to produce weapons-grade uranium;

• The swarm could also contribute to future disarmament treaties through tasks such as inspecting storage facilities that hold nuclear warheads in preparation for dismantling. The bots could detect whether warheads were actually there and whether the declared number of weapons was correct. They could also be used to determine that declared non-nuclear military facilities do not contain nuclear materials. 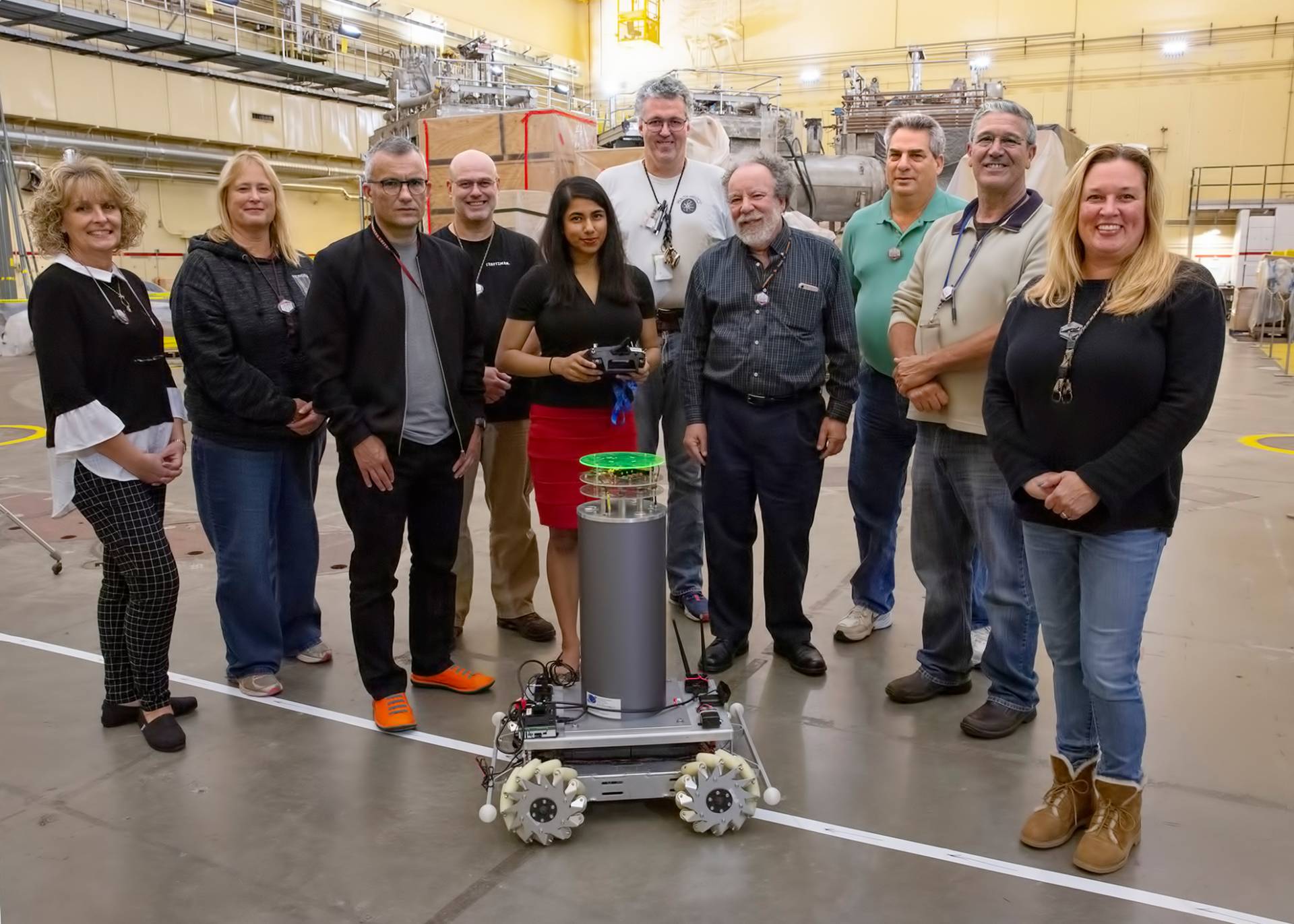 The next step in development includes design of machine learning software to guide the robots, and technology to enable the robots to communicate with one another during inspections. The artificial intelligence (AI) system, led by principal investigator Naomi Leonard, the Edwin S. Wilsey Professor of Mechanical and Aerospace Engineering at Princeton, employs what is called the multi-armed bandit approach — a statistical system named for getting the best results from a series of slot machines. The key challenge in looking for undeclared activities is to make a wise selection between continuing to explore versus stopping to exploit small signals that could be indicative of misbehavior.

The idea for the project dates back to 2014 when Goldston and Mark Walker, then a graduate student in science, technology and environmental policy, heard about another laboratory that installed a ceiling with neutron detectors that all went off when a truck carrying uranium gas for enrichment went by. That led to talk of a robot detection system. “I said, ‘what about a robot?’” Goldston recalled, and Walker said, “what about a robot, that sounds crazy!”

But Goldston was encouraged to explore this option in discussions with International Atomic Energy Agency (IAEA) inspectors and plant operators. Glaser submitted a proposal to the U.S. Department of State with a subcontract for PPPL to construct and calibrate a single inspector bot, which is what the team has achieved.

The project swung into high gear last summer. Harry Fetsch, a physics student at Harvey Mudd College in the Science Undergraduate Laboratory Internship (SULI) at PPPL, ran thousands of computer hours to simulate the detection system. “These simulations informed the design of the experiments we conducted,” Glaser said.

Goldston now plans to visit the DOE’s Savannah River Site nuclear fuel fabrication plant to explore the possibility of testing the inspector bot in a facility where the output from enrichment plants goes. “We want to see if we can measure the neutrons coming out of the autoclaves,” he said of devices used to heat uranium to send it into the fabrication plant.

With further development, the project could demonstrate “that simple and robust autonomous, mobile, directionally and spectrally sensitive neutron detectors could provide a cost-effective means to provide effective and efficient verification,” Goldston said.

Support for this work comes from the National Nuclear Security Administration, a semi-autonomous agency within the DOE, and the U.S. Department of State Key Verification Fund. Simulations were performed on the high-performance computer cluster at Princeton University.

PPPL, on Princeton University's Forrestal Campus in Plainsboro, New Jersey, is devoted to creating new knowledge about the physics of plasmas — ultra-hot, charged gases — and to developing practical solutions for the creation of fusion energy. PPPL is managed by the University for the U.S. Department of Energy’s Office of Science, which  is the single largest supporter of basic research in the physical sciences in the United States and is working to address some of the most pressing challenges of our time.