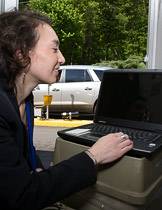 The "Miniature Integrated Nuclear Detection System" (MINDS) was developed by engineers at the Princeton Plasma Physics Laboratory (PPPL) while working on decommissioning the Tokamak Fusion Test Reactor. After 9/11, its developers realized they had also come up with a technique to detect and identify nuclear materials. Here, Dana Mastrovito tests the device, located near the underside of the car, at the PPPL guard booth on the Forrestal Campus.

In 1999, faced with the task of decommissioning the legendary Tokamak Fusion Test Reactor (TFTR), officials at the Princeton Plasma Physics Laboratory (PPPL) realized they needed something that didn't yet exist -- a way to detect exactly what "hot" elements were lacing the inner vessel of the doughnut-shaped reactor.

So they asked a team from the lab to invent a device that would identify each element in the reactor and how much was there. Ten years later, the group not only has successfully tackled that challenge, but it has won national recognition for a system that offers practical applications for homeland security and deterring radiological terrorist attacks.

The "Miniature Integrated Nuclear Detection System" (MINDS) was designed by a group led by Charles Gentile, one of the lab's leading experts in radioactive materials.

"The development of MINDS, from a fusion energy research tool into a potentially important addition to the nation's homeland security arsenal, illustrates an outstanding example of technology transfer from the laboratory to the marketplace," said Lewis Meixler, PPPL's head of technology transfer and applications research. "It is also a tribute to Charles Gentile and his dedicated team, whose tenaciousness in overcoming all obstacles and whose continuous striving to improve system performance made the MINDS possible." 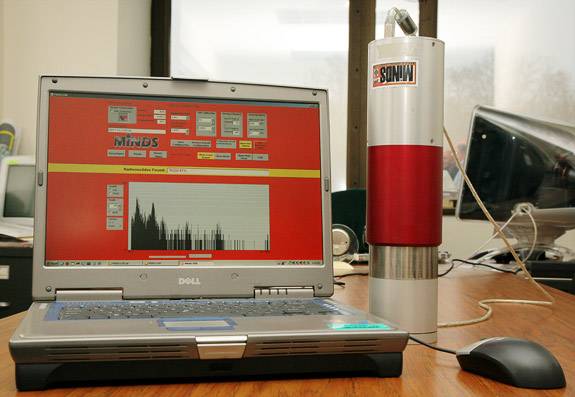 The simple, portable device identifies materials through their characteristic energy signals as unique as fingerprints. The three detectors are housed in a thermos-sized container that is connected to a laptop computer. The device issues a signal turning the laptop display bright red when nuclear material of interest is identified.

Since 1982, Princeton’s TFTR had been the epicenter of world-famous experiments demonstrating the high temperatures and other conditions needed for a significant amount of fusion to occur. By 1999, the reactor had reached the end of its useful life at the lab, which is funded by the U.S. Department of Energy and managed by the University. Its inner vessel had become radioactive in the final phases of experimentation when small amounts of tritium were injected, enabling TFTR to attain record levels of fusion power. Tritium is a radioactive isotope of hydrogen.

As part of the decommissioning process, government regulations require the precise labeling of each element in a reactor. There are about 2,000 radioactive materials that exist on Earth. Some are relatively harmless, such as the small amounts of americium-241 used in home smoke detectors. Others, such as highly enriched uranium, can be far more deadly. A Geiger counter, in this case, just wouldn't do.

The team crafted a lightweight, portable detection unit that could be lowered into the reactor chamber -- a metallic void lined with graphite tiles -- by a boom. In the beginning, the system was composed of multiple radiation detectors that could read a gamut of radiation signals, including gamma rays.

Identifying the horde of radioactive elements contained within the vessel walls proved to be trying. Radioactive materials are inherently unstable. As their inner nuclei spontaneously disintegrate, the materials give off radiant energy in the form of particles or rays. Although not resident in the TFTR vacuum vessel, materials such as uranium, thorium and plutonium emit characteristic energy signals as distinctive as fingerprints. The challenge rests, however, on ensuring that all are detected, because some materials cast off more powerful signals than others. Sometimes, it is the "quiet" ones with longer half-lives that are the most dangerous.

The first prototype detectors developed by the team missed the tritium signal. This was a problem. "The thing we were looking at had a weak signal, when everything around it had a loud signal," Gentile said. "It was like being in a crowded auditorium where everyone was screaming, and you wanted to hear the guy who was whispering."

The initial failure to find the tritium drove the team to design a more sensitive probe that allowed them to account for all the tritium. They linked the detector to a laptop computer. The PC contained a software program, a database of the characteristic signatures of radioisotopes. Employing artificial intelligence techniques, the program matched the signal being read with one of the "fingerprints" in its library. Finally, the tritium could be detected at the right quantities.

They considered their job done.

The MINDS device was invented by a team of engineers at the Princeton Plasma Physics Laboratory, including, from left: Kenny Silber, Henry Carnevale, Charles Gentile, Dana Mastrovito and Bill Davis.

In December 2001, three months after the 9/11 terrorist attacks, federal authorities issued a nationwide call for devices that could detect nuclear materials that might be hidden. The idea was to guard against radiological attacks using nuclear weapons or even "dirty bombs." Dirty bombs, also known as radiological dispersal devices, combine radioactive material with conventional explosives.

The PPPL team leapt at the opportunity to explore their device's potential for this pressing public need.

"We knew we had something that could be of use," Gentile said. "So we sent in the papers."

The then-developing U.S. Department of Homeland Security received 15,000 rival proposals for funding the development of such devices. Still, the PPPL proposal stood out. The U.S. Army, through the Picatinny Arsenal in New Jersey, selected the PPPL mechanism as one of the top entries and funded it for further development.

The team had its work cut out for it. Designing the detector for indoor, in-the-lab use by a team of seasoned engineers was simple compared to what was now needed -- a device that could be operated by a non-expert outdoors in an ever-changing environment. There, factors like background radiation, signals from medical radiological tests and even weather could easily skew results.

The PPPL engineers gathered to take on the challenge. Led by Gentile, the head of tritium systems, the team also included Stephen Langish, a member of the engineering and technical staff; Andrew Carpe, a technical assistant; and software engineers Kenny Silber, Dana Mastrovito and Bill Davis. Jason Perry, who earned his MSE at Princeton in 2004 in computer science, would eventually join the group, making significant contributions to the software effort.

The engineers knew they could detect radiological signals and identify their source. In the real world, the bigger problem was sorting out one from a cacophony of signals.

Levels of naturally occurring radiation from elements like radon often vary, depending on whether it rains or the temperature is high. Thousands of people each day go to medical centers where they ingest radiological dyes for imaging and treatment, emitting signals that need to be interpreted as nonhostile. Benign products, including some types of kitty litter and pottery, contain radioactive products that can be detected. And there's the phenomenon of "scatter," where particles bounce off objects or interfere with each other, blurring the "fingerprint" of a substance.

"You want to be able to find the needle in the haystack," Gentile said.

No one wanted a machine that set off an alert every time someone who has just undergone a cardiology "stress test" walked by. Nor did the designers want to miss anything significant that could be masked by such "benign" signals.

"We had to come up with a more sophisticated way to read the data," said Silber.

The solution, which came through years of trial and error, was found in combining two software programs using algorithms that were engineered employing techniques associated with specific characteristics of nuclear decay. The programs combined a plasma physics data strategy known as "peak fitting" and another approach employing artificial intelligence.

The look of the device has evolved with development. The three detectors are now housed in one thermos-sized container, which is attached either by wire or via wireless means to a laptop computer. Portable and easy to use, the device will issue a signal turning the laptop display bright red when nuclear material of interest is identified.

A high point came in 2005 when officials from Princeton signed a licensing agreement with InSitech Inc. allowing it to commercialize MINDS. InSitech is a not-for-profit organization working for the U.S. Army to bring government-developed technology to market.

InSitech, which has the exclusive license for marketing MINDS for the University, is now setting up its clients across the United States with the system. The client list is proprietary to InSitech, but MINDS has been deployed at military installations, ports and a major commuter rail station.

Kudos, too, are starting to pour in. In November, the Research and Development Council of New Jersey commended the team, bestowing it with its top prize, the 2008 Thomas Alva Edison Patent Award.

This month, the team received the top honor from the Federal Laboratory Consortium for Technology Transfer for its development of MINDS. The 2009 Award for Excellence in Technology Transfer recognizes lab employees who have accomplished outstanding work in the process of transferring a technology developed by a federal laboratory to the commercial marketplace. Consortium officials described the work as being "truly of the highest caliber" and representing the "cream of the crop."

University officials are pleased with the result.

"This technology may provide a method to protect the public from different kinds of threats," said John Ritter, director of the University's Office of Technology Licensing and Intellectual Property. "Viewed from that standpoint, we are very excited about MINDS."