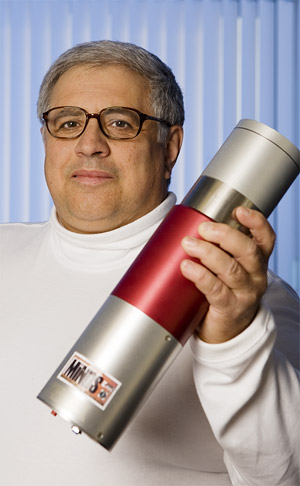 What it does: This compact system, about the size of a thermos with an associated computer, can be used to identify radioactive materials and to determine in real time whether the source is naturally occurring, medical or otherwise authorized, or unauthorized.

Inspiration: The PPPL team first created a device to identify nuclear elements during the decommissioning of the Tokamak Fusion Test Reactor, a massive fusion experiment that ran at PPPL from 1982 to 1997. After its potential for homeland security applications was realized in December 2001 when the U.S. government called for systems able to detect nuclear weapons and "dirty bombs," the team included in the device sophisticated capabilities to distinguish between expected and nonexpected sources of radiation in everyday venues, including rail stations, tollbooths, airports and military installations.

Commercialization status: InSitech Inc., a nonprofit foundation that commercializes government-sponsored technologies, has licensed MINDS technology from the University and is building a client base.