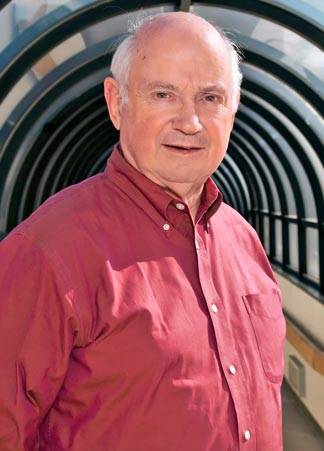 A.J. Stewart Smith, Princeton's vice president for the Princeton Plasma Physics Laboratory (PPPL), is stepping down in February. Over his nearly five decades at Princeton, Smith has played a leading role in conducting and supporting research in his field of particle physics and throughout the University.

As a young man, A.J. Stewart "Stew" Smith won the Canadian National Lacrosse Championship as a member of a powerful Vancouver, British Columbia, club team. That early success and love of teamwork foreshadowed an illustrious career in which Smith has played leading roles as an educator, particle physicist and administrator coordinating vast, vital research efforts. Now, after nearly 50 years on the faculty and staff of Princeton University, Smith is stepping down next February from his current post as the University's first vice president for the Princeton Plasma Physics Laboratory (PPPL).

"This is a natural transition," said Smith, who turned 77 in June. "My wife is very pleased."

A search for Smith's successor, led by Pablo Debenedetti, Princeton University dean for research, is underway.

Smith's lengthy career is studded with firsts. He served as Princeton's first dean for research before moving to PPPL, which the University manages for the U.S. Department of Energy (DOE). As a visiting scientist at the Stanford Linear Accelerator Center in the 1990s and early 2000s, he was in charge of a multinational team of 600 physicists and engineers when it found a stunning new example of an asymmetry in nature that helps to explain why the universe contains stars, planets and people rather than nothing at all. 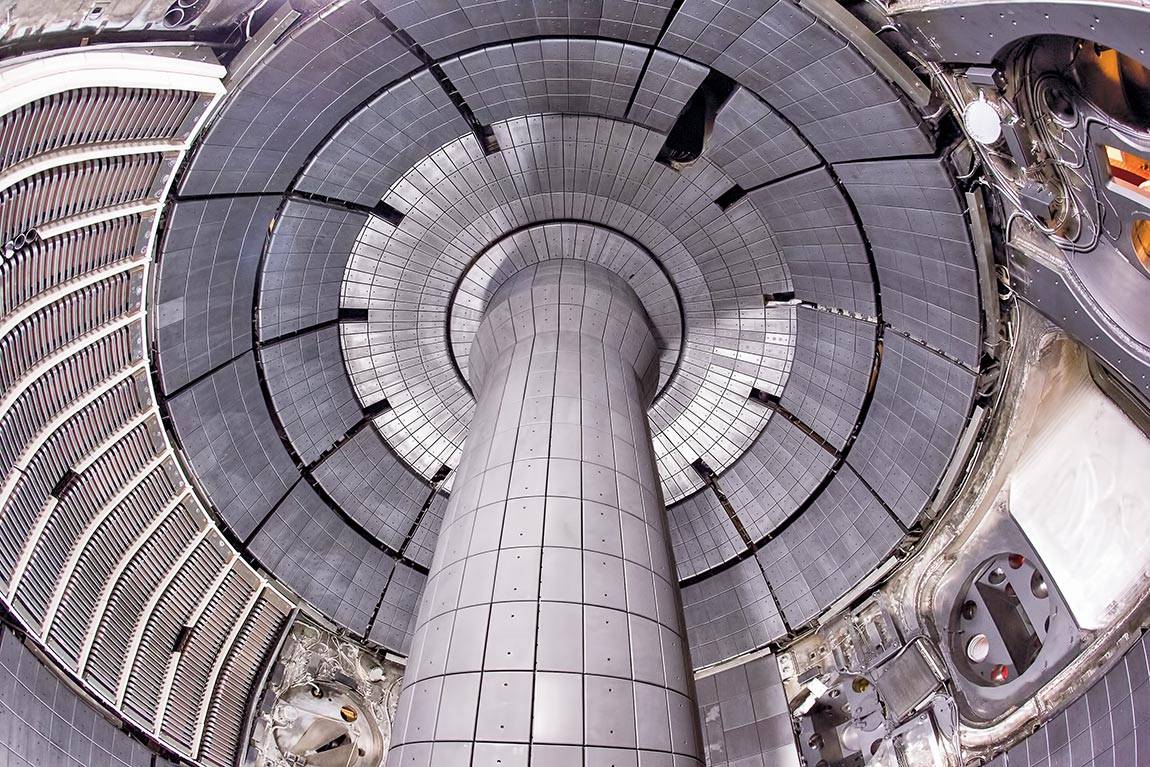 At PPPL, Smith has strengthened the relationship between the University and the Department of Energy. PPPL is completing the upgrade of the National Spherical Torus Experiment (above), the laboratory's major fusion facility. (Photo by Elle Starkman, PPPL Communications)

In recent years, Smith has re-shaped the research landscape at and between Princeton and PPPL.

"Stew Smith has been a tremendous advocate for research at Princeton as our first vice president for PPPL and as our founding dean for research," said Princeton President Christopher L. Eisgruber. "In his work with PPPL, Stew has strengthened Princeton's longstanding relationship with the U.S. Department of Energy, and he designed and implemented University governance structures that enhance the laboratory's management practices and its formidable scientific work. He has increased interaction between PPPL and the University's main campus and championed the societal benefits of the quest to create viable fusion energy. We are deeply grateful for Stew's many contributions to Princeton's research enterprise over his nearly 50 years as a widely respected scientist and teacher and as an exceptional leader."

At PPPL, Smith oversees the scientific, operational and strategic planning functions of the laboratory and serves as primary liaison with the DOE. Among the major initiatives developed on his watch has been construction of the $94 million upgrade of the National Spherical Torus Experiment, the laboratory's major fusion facility. He lumps himself together with PPPL Director Stewart Prager and deputy directors Adam Cohen (operations) and Mike Zarnstorff (research) as members of what he calls "The Gang of Four."

For Prager, working with Smith has been a singular experience.

"Stew Smith brings excellence and uniqueness to the critical position of University vice president for PPPL," Prager said. "His combination of high scientific stature, extensive experience in the DOE national lab complex, and deep knowledge of the University is impressively embodied within one person. This, combined with his high-energy, brilliant ability to innovate and find new solutions, has made him an amazingly effective vice president and enormous fun to work with."

His achievements are appreciated at DOE.

"We commend Stew Smith for his broad perspective in science management and for the vital role that he has played in working with Princeton University, DOE and PPPL to advance the science at PPPL," said Patricia M. Dehmer, acting director of the DOE's Office of Science, the largest single supporter of basic research in the physical sciences in the United States. "We very much hope that the kind of engagement of Princeton University in the life of PPPL that Stew Smith has cultivated will continue into the future." 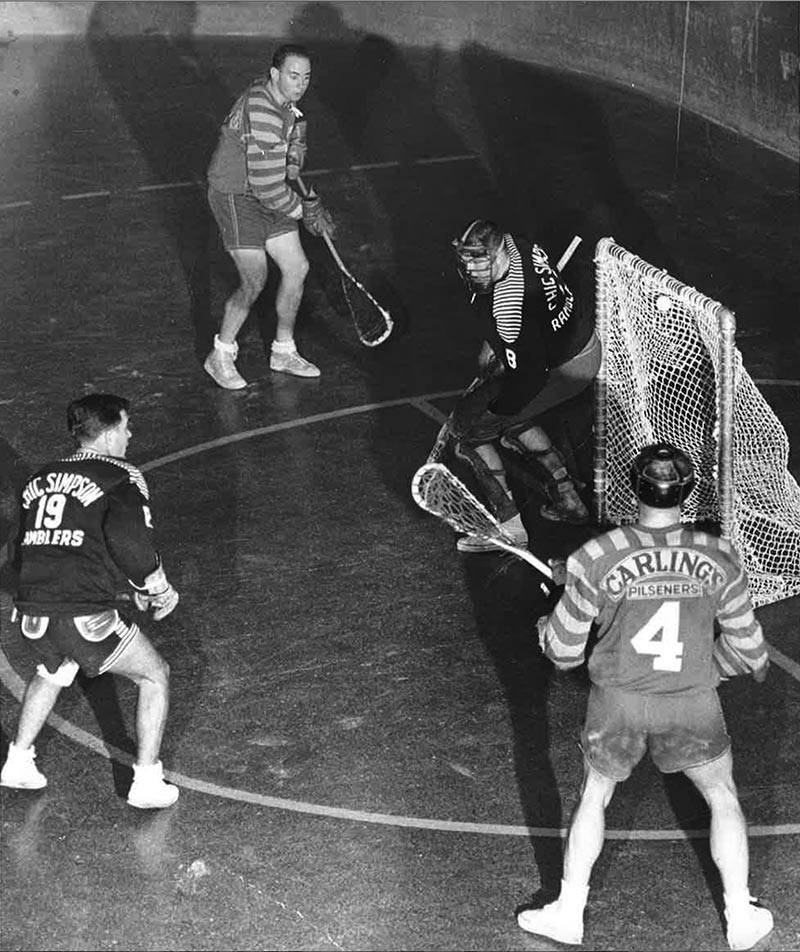 Smith, at top, scores a goal for the Vancouver Carlings during a 1961 Canadian National Lacrosse Championship game. (Photo courtesy of A.J. Stewart Smith)

Smith grew up in Victoria, British Columbia, as a sports-minded youngster who played rugby and lacrosse. He earned bachelor's and master's of science degrees from the University of British Columbia, and played lacrosse for two summers with the Vancouver Carlings — a dominant club that won four national championships in the 1960s, beginning with the team's first in 1961. He enjoyed science and humanities courses as a student and had to decide which path to pursue.

"It was not an easy choice," he recalls.

Smith received his doctorate in physics from Princeton in 1966 and joined the faculty the following year after a postdoctoral stint in Hamburg, Germany. He became Princeton's Class of 1909 Professor of Physics in 1992 and chaired the Department of Physics from 1990 to 1998. More advancements followed: He unified and expanded Princeton's research operations as dean for research from 2006 to 2012 before embarking on the position of University vice president for PPPL.

Smith probed subatomic mysteries at Princeton, U.S. national laboratories and CERN (the European Organization for Nuclear Research) in Switzerland all the while. He was a founder of a Brookhaven National Laboratory team that set up an experiment to hunt for an exceedingly rare form of decay of a particle called a K meson, a decay seen as a once-in-10 billion event. The experiment ran for more than a decade before the decay was finally observed in 1997 — a finding that won Smith and collaborators the American Physical Society's 2011 W.K.H. Panofsky Prize in Experimental Particle Physics.

At the Stanford Linear Accelerator Center, Smith played increasing roles in the construction and scientific operation of the historic BaBar experiment that shed light on the puzzle of why anything exists. According to standard cosmology, the Big Bang that gave birth to the universe created equal amounts of matter and oppositely charged antimatter, which annihilate each other on contact. So if the two are perfect mirror-image twins, nothing should by now exist. But if the two can be shown to have at least some different properties, the disparity could indicate how matter has come to predominate.

Such disparity is precisely what the BaBar experiment, whose whimsical name came from the elephant in the French children's book, discovered under Smith's leadership in 2001. The findings showed that particles called B mesons behave differently from their antiparticles, thus confirming a theorized asymmetry called "charge-parity (CP) violation" that scientists believe has allowed matter to gain the upper hand.

The discovery capped a decades-long search for a fresh example of CP violation, which was first spotted in the behavior of K mesons and their antiparticles by physicists Val Fitch of Princeton and James Cronin of the University of Chicago in 1964. That finding created a sensation and brought Fitch and Cronin the Nobel Prize in 1980. But not until the BaBar experiment could a new example of CP violation be found.

"People have looked for this or the equivalent under every rock," Smith said in 2001. 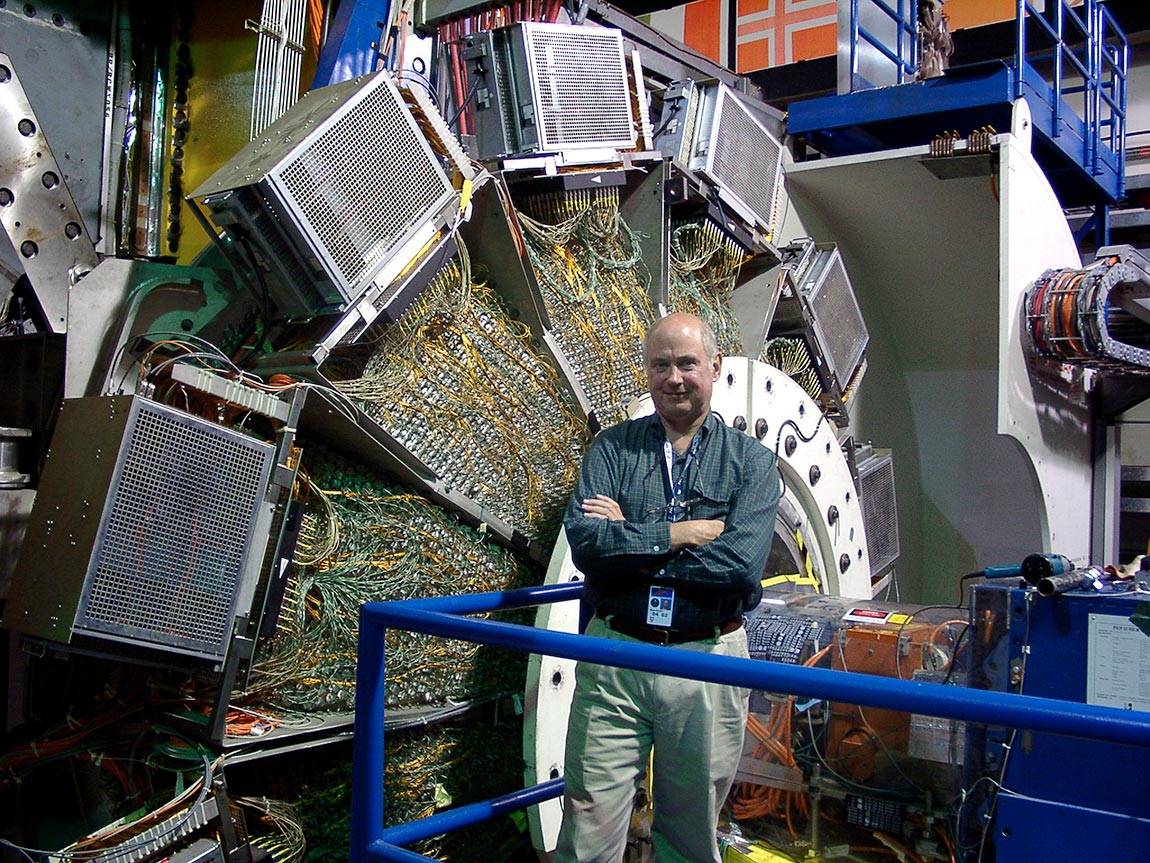 At the Stanford Linear Accelerator Center, Smith led an international collaboration of scientists looking for differences between the behavior of matter and antimatter particles. The historic BaBar experiment, which found a new example of charge-parity violation, shed light on the puzzle of why anything exists. Above, Smith stands in front of the instrument that detected subatomic particles in the aftermath of collisions. (Photo by Diana Rogers)

Hunt for the Higgs boson

Smith's work on BaBar led to a new role at CERN, which was gearing up to hunt for the Higgs boson, the particle that gives other particles their mass according to the Standard Model of subatomic physics. From 2004 to 2009, Smith served as chief referee for construction of the Compact Muon Solenoid (CMS) experiment, one of the two enormous particle detectors that spotted the Higgs in 2012.

"My goal was to give tough love to keep the project on track and help it avoid problems we had experienced in BaBar," Smith said of the work.

"Stew is a dedicated and immensely talented scientist who demands a high standard for himself and from everyone around him," said Sir Tejinder Virdee, who co-founded the CMS experiment and headed it for many years. "He wants to see results and with his probing mind, his inquisitive nature and through constructive collaboration, we all got to see amazing results from CMS with the discovery of the Higgs boson — a momentous discovery in which Stew can rightly claim a part." 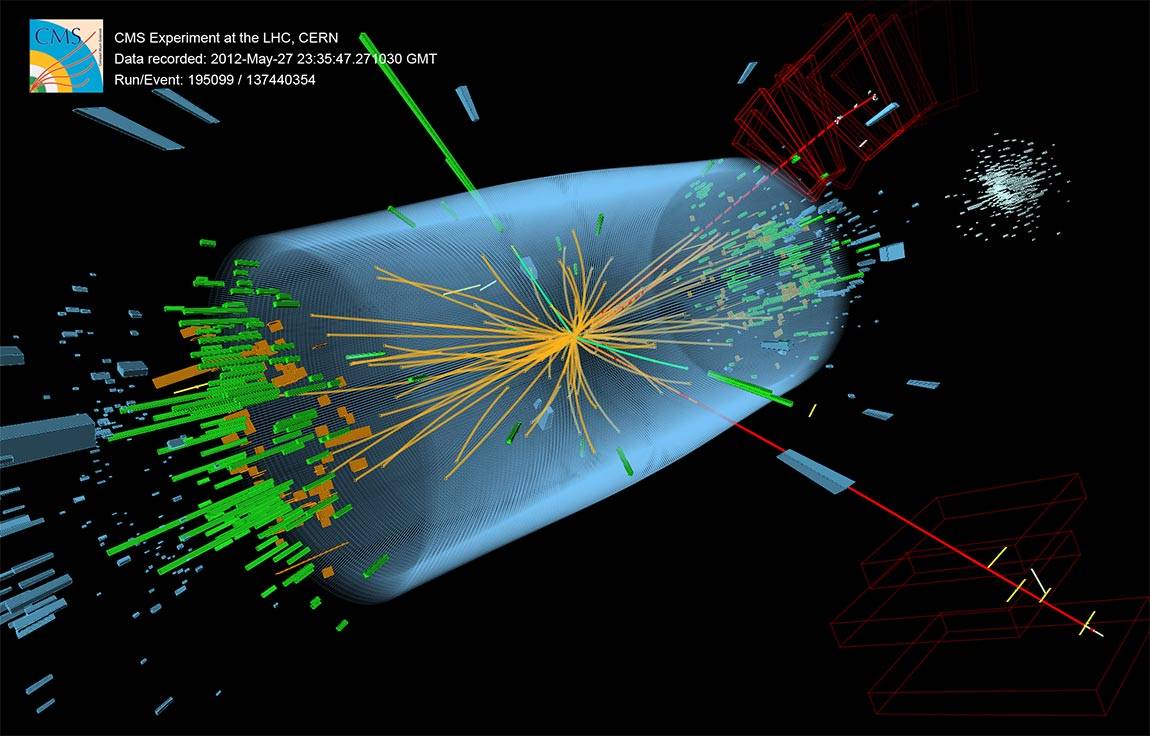 At CERN (the European Organization for Nuclear Research), Smith served from 2004 to 2009 as chief referee for construction of the Compact Muon Solonoid (CMS) experiment. The experiment was one of two particle detectors that spotted the Higgs boson in 2012; a particle collision event and the subsequent decay of the Higgs boson, recorded with the CMS detector in 2012, is shown above. (Image courtesy of CERN)

As a scientist, Smith has lived through major transitions in particle physics that have seen experiments grow ever larger, with ever-more researchers and engineers. Nearly 4,000 people have participated in the CMS experiment, for example.

"My generation was always in the shadow of giants like Val Fitch" who worked in small groups, he recalls. But the big-team approach to particle physics has suited Smith well. "Maybe it comes from playing sports," he said, "but I like to do things in a team fashion."

Smith will have plenty of opportunity to work in that fashion after he steps down from PPPL next year. At CERN, Smith will continue to chair an advisory committee for the planned 2023 upgrades of experiments at the Large Hadron Collider, the world's largest and most powerful particle accelerator. Smith also chairs a high-level advisory committee at the National Institute of Nuclear Science in Italy, and he heads an international panel that advises on the next generation of experiments at SNOLAB, an underground laboratory in Ontario, Canada, that specializes in neutrino and dark matter research.

Asked to name his proudest achievement, Smith says it's a tossup between finding CP violation with the BaBar experiment and developing new governance structures for enhancing research and management at PPPL. Such milestones reflect the diverse sides of a remarkable, and remarkably varied, career that shows no sign of slowing down.

PPPL, on Princeton University's Forrestal Campus in Plainsboro, New Jersey, is devoted to creating new knowledge about the physics of plasmas — ultra-hot, charged gases — and to developing practical solutions for the creation of fusion energy. Results of PPPL research have ranged from a portable nuclear materials detector for anti-terrorist use to universally employed computer codes for analyzing and predicting the outcome of fusion experiments. The laboratory is managed by the University for the U.S. Department of Energy’s Office of Science, which is the largest single supporter of basic research in the physical sciences in the United States, and is working to address some of the most pressing challenges of our time. For more information, please visit the Office of Science website.