A team of Princeton University physicists and students have made major contributions to the hunt for the Higgs boson, a particle much smaller than an atom theorized to be crucial to understanding the nature of the world around us.

In an announcement that has received international attention, the European Organization for Nuclear Research (CERN) on July 4 said that physicists observed a new particle whose properties are consistent with the predicted Higgs boson. The newly discovered particle is in the mass region of the Higgs, around 125-126 giga-electron volts (GeV).

The preliminary results are based on data collected in 2011 and 2012, with the 2012 data still under analysis. Publication of these latest results is expected around the end of July, and a more complete picture of these observations will emerge later this year after further data is collected and analyzed.

"There is absolutely no doubt that the Compact Muon Solenoid (CMS) and ATLAS experiments have independently discovered a new particle of mass 125 GeV, and the results of the two experiments are completely consistent," said A.J. Stewart Smith, Princeton's dean for research and Class of 1909 Professor of Physics, referring to the two experiments primarily used to search for the Higgs. "The decay channels of this particle are exactly the ones in which the Higgs particle is predicted to appear. The mass of the particle is just what the Standard Model predicted by correlating many indirect measurements.

"Therefore, at least in my humble opinion, the newly discovered particle walks like a Higgs and quacks like a Higgs, and is very likely to be the Higgs, even though the experimenters modestly point out there is still much work ahead to characterize it," said Smith, who has long been involved with the particle detector used in the CMS experiment. "Whatever lies ahead is indeed exciting." 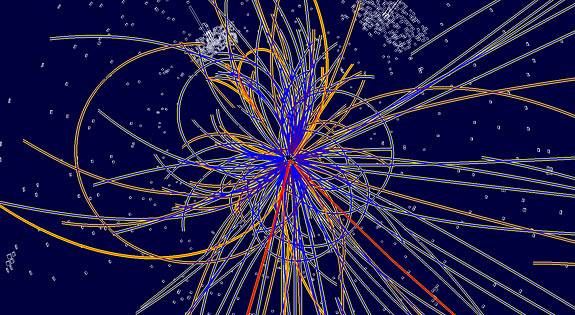 Princeton physicists are part of an international team hunting for the Higgs boson, a particle theorized to be crucial to understanding the nature of the world around us. This simulation depicts a detection of the Higgs in the Compact Muon Solenoid experiment used by physicists working at the world's largest particle accelerator, the Large Hadron Collider. (Image courtesy of CERN)

About 15 Princeton researchers are members of the international collaboration that has been hunting for the Higgs at the world's largest particle accelerator, the Large Hadron Collider (LHC), a 27-kilometer underground circular tunnel crossing the border of Switzerland and France.

The Higgs search involves probing collision debris created by smashing together two beams of subatomic particles called protons. Each proton beam barrels through the underground tunnel at a fraction less than the speed of light.

When the two beams strike each other, the protons burst apart, releasing smaller fragments that rejoin to create thousands of new particles. Massive five-story-high detectors capture images of the debris, and computers comb the data looking for hints of the Higgs particle.

Among other things, Princeton physicists are responsible for determining the luminosity, or the precision at which the beams intersect — a key measure of how well the LHC is functioning. Knowing the luminosity also allows researchers seeking the Higgs to determine the number of the elusive particles they should expect to see.

"A huge amount of work goes into making sure things are working properly," said Daniel Marlow, the Evans Crawford 1911 Professor of Physics, who works on luminosity measurements with his colleague Assistant Professor Valerie Halyo.

Coaxing the two beams to line up perfectly is extremely difficult — requiring a precision similar to hitting a target with a laser beam shot from New York to Chicago. Each beam is just tens of microns thick, smaller than a human hair, and about 10 centimeters in length. If the beams miss each other even slightly few or no particles will be produced.

Another two Princeton physicists, professors Christopher Tully and James Olsen, are leading initiatives to find signs of the Higgs boson. A boson is one of two fundamental classes of particles that make up atoms.

Finding the Higgs would validate a widely accepted theory of the universe known as the Standard Model, which includes the Big Bang. The Standard Model brings together the all known physical forces with the exception of gravity.

The Higgs particle and its corresponding Higgs force field are essential for explaining how particles have mass and how the universe evolved. "Without the Higgs, matter would not exist as we know it," Tully said. 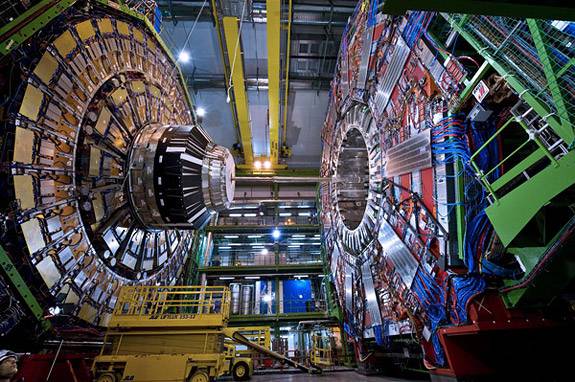 Princeton physicists use the Compact Muon Solenoid (above), a massive particle detector, in the search for the elusive Higgs particle. The research team at the Large Hadron Collider has discovered a new particle and will conduct further analysis to determine whether it has the properties of the predicted Higgs boson. (Photo courtesy of CERN)

How to find the Higgs

Because the Standard Model predicts that the Higgs breaks down rapidly into other particles, physicists are looking for signatures of those decay particles. "You don't actually see the Higgs itself but rather the particles it decays into," Olsen said.

If the Higgs exists, its decay particles will be noticeable among the random jumble of other particles. A massive particle detector used in the CMS experiment is one of two detectors set up to record the results of collisions. "The CMS is like a three-dimensional camera that takes 40 million images per second," said Tully.

Five distinct decay pathways — or "channels" — are possible and two of these channels are being explored at Princeton.

One channel involves the decay of the Higgs particle into two particles known as bottom quarks, or "b quarks"; Olsen leads the search for b quarks for the CMS experiment. The challenge is to separate Higgs-related b quarks from background noise created by the decay of other particles.

A second channel involves decay into two particles of light, or photons. This effort is led at Princeton by Tully. Compared to b quarks, the Higgs boson decays less frequently into two photons, but with less background noise, so this method is considered slightly more promising for finding the Higgs.

At the second detector, known as ATLAS, similar teams are set up to look for the Higgs through the same five decay channels.

Although one decay channel may be detected before the others, eventually all five should be found at both detectors if the Higgs particle exists as the theory predicts it does, said Marlow. "If the LHC results are slightly different from predictions, then physicists will have a lot of work to do refining the theory to match the observations," he said.

A new window into physics

Although the proton smash-ups are conducted at the LHC under the European Organization for Nuclear Research (CERN), the effort is international in nature. Princeton researchers and students interact with their counterparts at CERN through lightning-fast Internet connections.

With each run of the collider, which began operating in 2010, the researchers have narrowed the range of masses in which the Higgs particle is likely to be found. Last December, CERN researchers announced that they believe they found the Higgs in a mass range in the vicinity of 125 times the mass of the proton.

The Higgs boson is named for Peter Higgs, emeritus professor at the University of Edinburgh, who theorized that the particle must exist to explain how matter has mass. Higgs suggested that matter particles gain mass when they push against a Higgs boson in the Higgs force field, both of which are invisible to the eye but permeate the universe. The more strongly a particle interacts with a Higgs boson, the more mass that particle has.

Once the Higgs sightings are confirmed and studied, the LHC will be ready for upgrades that will enable it to study new types of physics, such as supersymmetry and string theory, said Marlow. "The Higgs mechanism is really a window into a whole set of physics that we have yet to explore," he said.

(Morgan Kelly contributed to this story.)