New results from the Large Hadron Collider (LHC) indicate that the particle detected last summer is looking more and more like the Higgs boson, the particle thought to be essential for giving mass to the universe. Several Princeton University faculty members and students are directly involved in the search for the once-elusive particle.

Today's announcement from spokespersons for the European Organization for Nuclear Research (CERN) at the Moriond conference in La Thuile, Italy, is a follow-up to the July 4, 2012, announcement that a Higgs-like particle had been found. Since then, researchers have analyzed roughly two-and-a-half times more data. Further data will be available starting in late 2014 when CERN's Large Hadron Collider on the border of Switzerland and France reopens after a long period of scheduled maintenance.

Despite the announcement, the question remains open to whether the discovered particle is the Higgs boson of the Standard Model, a widely accepted model of particle physics, or possibly the lightest of several bosons predicted in theories that go beyond the Standard Model. 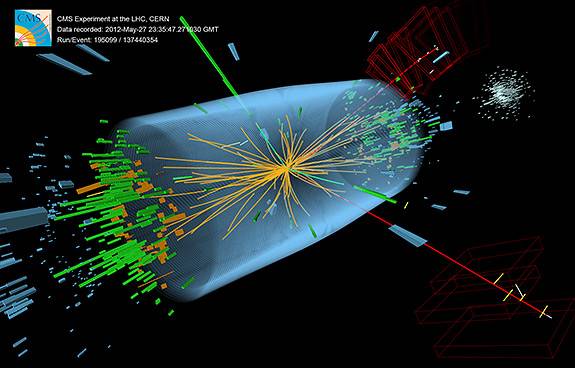 This collision event, recorded with the Compact Muon Solenoid detector in 2012, shows characteristics expected from the decay of the Standard Model Higgs boson to a pair of Z bosons, one of which subsequently decays to a pair of electrons (green lines and green towers), while the other Z decays to a pair of muons (red lines). (Image courtesy of CERN)

James Olsen, a Princeton University professor of physics who works on the Higgs project at CERN, said that several new pieces of information released over the past week at the Moriond conference support the conclusion that the discovered particle fits into Standard Model predictions. For example, the rate of production of Higgs particles in repeated collider experiments measured by the Compact Muon Solenoid (CMS) detector conforms to Standard Model behavior.

"We now have the full data set from 2011-12 and the particle looks more and more like the Standard Model Higgs, although we will not know for sure until more studies are done," Olsen said. Olsen leads roughly 500 scientists searching for the Higgs particle using the CMS, one of two instruments looking for signatures of the Higgs amongst the debris created when particles smash into each other at the LHC, an underground particle collider and the world's largest scientific instrument.

Because the Higgs particle is short-lived, scientists find it by looking for signature patterns that occur as it decays into less energetic particles, such as a pair of Z bosons (pictured). At the CMS, Olsen said, all of these signature patterns, known as decay modes, suggest that the Higgs is a Standard Model particle.

Further evidence for a Standard Model Higgs comes from studies of its "spin," Olsen said. Spin is a quantum-mechanical property analogous to the rotation of a particle around its axis. The Standard Model predicts that the Higgs particle should have no spin, and in fact, that is what the CMS detector has observed in several decay modes, he said.

Finally, new evidence presented at Moriond today from a CMS experiment looking at the two-photon decay mode indicates that the rate of the decay conforms to the Standard Model prediction. The CMS had not updated its two-photon decay mode results since July 2012. "We are agreeing with the Standard Model in every way that we have searched so far," Olsen said, "but we will need more data to make a definitive conclusion."