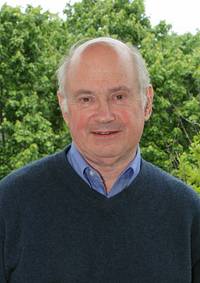 A.J. Stewart Smith, a longtime Princeton faculty member and leading researcher in high-energy particle physics, has been selected to chair the University Research Board.

He will begin a five-year term on July 1, 2005, succeeding Will Happer, who plans to return to full-time teaching and research after serving as chair for 10 years.

"I am absolutely delighted that Stew Smith has agreed to become the next chair of the University Research Board," said Provost Christopher Eisgruber. "Professor Smith is a scientist of extraordinary distinction who is respected throughout the campus. He is also a nationally-known figure in science policy and a proven administrator."

He added that Happer, the Cyrus Fogg Brackett Professor of Physics, "has been a model chair for the research board, and he is a superb University citizen. We are grateful for his service, and we will miss his leadership."

Smith first came to Princeton as a graduate student, earning his Ph.D. in physics in 1966. He joined the faculty in 1967 and served as chair of the physics department from 1990 to 1998 and associate chair from 1979 to 1982. Since 1992, he has been the Class of 1909 Professor of Physics. He also has served as scientific team leader of an international collaboration of 600 scientists from 10 countries involved in a project based at the Stanford Linear Accelerator.

The chair of the University Research Board, whose rank is equivalent to that of dean, has administrative oversight of organized research activities throughout the University, is responsible for dealing with questions of policy in the acceptance and administration of research grants and contracts, and has general supervision over the application of established policy in this area. The chair also advises the president and provost about how best to sustain excellence in research at the University. The Office of Research and Project Administration is the administrative arm of the board, which consists of six faculty members.

In 2003-04, researchers at Princeton conducted $142 million in sponsored research, an increase of $4 million from the previous year. The largest source of research funding at Princeton was the U.S. government, which provided $105 million toward 686 projects. In addition, researchers at the Princeton Plasma Physics Lab that year conducted $71.3 million in fusion energy research funded primarily by the U.S. Department of Energy.

Eisgruber said that Smith will face several challenges as chair of the research board. The costs of doing first-rate scientific research are rising as experiments become more sophisticated, and government funding for scientific research in many areas has remained flat or declined. In addition, there is increased competition among institutions for the best scholars.

"We are entering a period when universities will need to think imaginatively about how to nurture and support top-quality research," Eisgruber said. "Stew Smith's experience, energy and commitment to Princeton will make him a superb partner in the formulation of Princeton's research policy. I am confident that he will work well with faculty and administrators throughout the University to understand the problems they confront and to identify new ways for Princeton to enhance the excellence of its research community."

"It is a privilege to join the team of Shirley Tilghman and Chris Eisgruber and to share in their commitment to preserve and strengthen research at Princeton," Smith said. "I strongly endorse their 'bottoms-up' approach, in which the University must encourage and enable the most promising ideas, and do what it takes to secure competitive funding and facilities for outstanding researchers. In an era where the most exciting initiatives can be very expensive and cross several disciplines, this is the main challenge for Princeton in maintaining its special place among the great research universities."

Smith holds bachelor's and master's degrees from the University of British Columbia. Between earning his Ph.D. and joining the Princeton faculty, he spent a year as a postdoctoral fellow at Deutsches Elektronen-Synchrotron in Germany.

Over the years, he has carried out a succession of major experiments in particle physics at U.S. national laboratories. Since 1995, Smith has focused on the whimsically-named BaBar experiment at the Stanford Linear Accelerator. Elected scientific team leader of the BaBar collaboration in 1999, Smith directed this effort to answer fundamental questions about why matter exists in the universe.

In 2001, BaBar uncovered a rare but critical loss of symmetry in the behavior of subatomic particles, culminating a 37-year search for further examples of the profound phenomenon of charge-parity, or CP, violation, discovered in 1964 by Princeton physicists Val Fitch and James Cronin, for which they received the 1980 Nobel Prize in physics. CP violation is required to avoid the complete annihilation of matter and antimatter after they were created equally in the Big Bang.

A fellow of the American Physical Society, Smith served as chair of the science and technology steering committee of Brookhaven Science Associates, the new contractors for Brookhaven National Laboratory, from 1998 to 2001. Since 2004, he has been a member of the experiments committee for the Large Hadron Collider at CERN (the European Organization for Nuclear Research) in Geneva, Switzerland. He has served on boards for many other groups, including the U.S. Department of Energy, the National Academy of Sciences, the Lawrence Berkeley National Laboratory and the National Research Council of Canada.