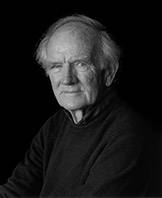 A towering figure in physics who helped shape our understanding of the universe, Princeton University emeritus professor and Nobel laureate Val Logsdon Fitch died peacefully Feb. 5 in Princeton, New Jersey. He was 91.

Known for foundational contributions to the standard model of particle physics, Fitch is remembered for his modesty and his kindness as well as for his experiments and insight into the fundamental nature of matter.

"Val was a wonderful human being who had real impact on the field of high-energy physics as well as on science policy," said A J. Stewart Smith, vice president for the Princeton Plasma Physics Laboratory and Princeton's Class of 1909 Professor of Physics. "His studies of the basic constituents and forces among sub-atomic particles led to a discovery that even 50 years later remains one of the profound mysteries of the early universe. That is his main claim to fame."

Fitch was awarded the Nobel Prize in Physics with his Princeton colleague Professor James Cronin in 1980 for "the discovery of violations of fundamental symmetry principles in the decay of neutral K-mesons." Based on experiments that Fitch and Cronin published in 1964, the prize acknowledged the finding that the laws of physics are not quite the same for particles and their opposites, anti-particles. Nor are they the same for a class of processes in which the direction of time is reversed.

"The work for which he received the Nobel Prize is one of the most important in the 20th century to show the laws of physics actually change with time," said Samuel Ting, a Nobel laureate in physics and the Thomas D. Cabot Professor of Physics at the Massachusetts Institute of Technology.

Fitch and Cronin's results indicated that a long-held rule in physics called charge-parity (CP) symmetry indeed had exceptions. "His effect came out of the blue," said Smith. "Much to [Fitch and Cronin's] surprise, they found a result that violated CP symmetry. It took the physics community more than two years to rule out other explanations, but before long there was no doubt about it."

The effect helped explain a mechanism, still being explored today, for how matter could dominate over anti-matter after the creation of the universe in the Big Bang, Smith said. Both matter and anti-matter are thought to have been created in equal amounts, but today the universe is comprised predominantly of matter.

"This is a very fundamental discovery, because what we see in the universe is only matter, and this helps explain why it is that we don't have galaxies made of antimatter," said Pierre Piroue, Princeton's Henry DeWolf Smyth Professor of Physics Emeritus and a senior physicist.

During a lifetime of accomplishments in physics, Fitch earned the admiration of all who worked with him, his colleagues said. "He was a person with great principles and he was very easygoing and polite," said Cronin, who served on the faculty in the Department of Physics at Princeton with Fitch from 1958 to 1971. Cronin and Fitch continued to collaborate and visit each other throughout their careers.

Fitch was born March 10, 1923, in the Sandhills of Nebraska in the town of Merriman on a cattle ranch where his father raised purebred Herefords and his mother was a schoolteacher. When Fitch was young, the family moved to Gordon, Nebraska, where Fitch graduated as valedictorian of his high school in 1940.

Fitch attended two and a half years at nearby Chadron State College before he was drafted and entered the U.S. Army in March 1943. He was sent to Los Alamos National Laboratory to work on the Manhattan Project where he assisted in the development of the atomic bomb. He witnessed the first detonations of the bomb in 1945 where he was responsible for the timing signals that triggered the weapon.

After the war, Fitch worked for another year at Los Alamos before finishing his undergraduate degree at McGill University and then entering graduate school at Columbia University, where he received his Ph.D. in physics in 1954. In research conducted with his adviser James Rainwater, Fitch discovered that the nucleus of the atom was much smaller than was previously thought, about half the size and twice the density.

Upon arriving at Princeton in 1954, Fitch began conducting experiments using the high-energy particle collider at Brookhaven National Laboratory. There, he met James Cronin, and later the two began a collaboration that would lead to the Nobel Prize.

In addition to the Nobel Prize, Fitch earned many honors and awards, including the E. O. Lawrence Award in 1968 from the U.S. Department of Energy; the John Price Wetherill Medal of the Franklin Institute in 1976, and the National Medal of Science in 1993. He was a member of the National Academy of Sciences, the American Academy of Arts and Sciences, and the American Philosophical Society. He was a Sloan Fellow, a Fairchild Scholar at the California Institute of Technology, and a Distinguished Visiting Professor at the University of Chicago.

In his free time, Fitch enjoyed growing bonsai, baking bread and playing Scrabble. He spent every summer in his beloved Nova Scotia and became an accomplished sailor. He is remembered by his family for his kindness, intelligence, gentleness and generosity of spirit.

He is predeceased by his first wife, Elise Fitch, and his son John Fitch.

Funeral services will be private. In lieu of flowers, the family request that contribution in Fitch's memory be sent to the Sierra Club and SAVE Animal Rescue.