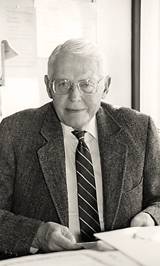 George T. Reynolds, a physicist whose foresight laid the groundwork for successful research efforts at Princeton University and many other institutions, died of cancer Tuesday, April 19, at his home in Skillman, N.J. He was 87.

Reynolds, whose career at Princeton began as a graduate student in the early 1940s and continued as a faculty member for four decades, was a leading research director in the fields of cosmic rays, high energy particle physics and biophysics. He was known for his outstanding ability to recognize the potential of research projects and then to attract extraordinary scientists -- including several Nobel Prize winners -- to work on those projects.

"George was a remarkable man," said Sol Gruner, who earned his Ph.D. from Princeton in 1977 with Reynolds as his dissertation adviser. "He was one of those relatively unseen people who builds the foundation of a place and makes it work. He was both blessed and cursed with the ability to foresee needs and opportunities well ahead of most others, and worked tirelessly to bring these into being, to Princeton's great benefit."

Gruner, who also served on Princeton's faculty until 1997, is now the John L. Wetherill Professor of Physics at Cornell University and director of the Cornell High Energy Synchrotron Source. He specifically cited Reynolds' leadership of Princeton's Elementary Particles Laboratory in the 1950s and Center for Environmental Studies in the early 1970s. "In both cases," Gruner said, "the activities, and faculty who were attracted to these activities, had impact that radiated across the world."

Among those recruited to Princeton by Reynolds were Val L. Fitch, the James S. McDonnell Distinguished University Professor of Physics Emeritus at Princeton, and James W. Cronin, now at the University of Chicago, winners of the 1980 Nobel Prize in physics. From 1958 to 1971, Fitch and Cronin worked in the particle physics laboratory run by Reynolds and supported by  contracts with the Office of Naval Research and the Atomic Energy Commission. Riccardo Giacconi, a winner of the 2002 Nobel in physics, spent two years (1958-59) as a postdoctoral research associate working with Reynolds.

Born in Trenton, N.J., on May 27, 1917, Reynolds graduated from Rutgers University in 1939 with Phi Beta Kappa honors. He earned his Ph.D. from Princeton in 1943 and for the next year was a research physicist at the University. In 1943, he also was commissioned as an ensign in the U.S. Navy.

"He truly loved the sea [he was an avid surf fisher and sailor], and in 1943, when just about everybody in the physics department was leaving for Los Alamos to work on the atomic bomb, George wanted to join the Navy, not Los Alamos," said Pierre Piroué, the Henry DeWolf Smyth Professor of Physics Emeritus at Princeton, for whom Reynolds was a dissertation adviser in the 1950s. "So he volunteered, but was turned down because he wore glasses. But he was not the person to take no for an answer. He went down to Washington to see influential people, and as a result he succeeded in having the Navy requirement of 'no glasses' waived for him. So in 1944 he finally joined the Navy, got married and awaited his first assignment. The letter came ordering him to head for … Los Alamos! George, who had a great sense of humor, liked to remind us of this story."

Reynolds worked on the Manhattan Project as a blast effect specialist. During the last days of World War II, he was on Tinian Island, then sent to Japan to conduct bomb damage analysis. In 1946, he was awarded the Army-Navy Certificate of Appreciation for his contributions to the Office of Scientific Research and Development during the war.

Upon his return to Princeton in 1946, he was appointed as an assistant professor of physics, was promoted to associate professor in 1951 and to professor in 1959. He was named the Class of 1909 Professor of Physics in 1978, and he transferred to emeritus status in 1987. Over the years, he held several fellowships and visiting professorships at Imperial College, London, Cambridge University and Oxford University.

From 1948 to 1970, Reynolds was director of the High Energy Physics Program at Princeton. Considered one of the founders of high energy particle physics on campus, he was in charge of the group working on cosmic rays and elementary particles under what was perhaps the largest grant on campus at the time. His contributions included the invention of the liquid scintillator, now a valuable tool for nuclear and cosmic ray research as well as biological and medical research. The device made visible, with very precise timing, the track of an ionized particle.

In the early 1970s, Reynolds took the somewhat unusual step of significantly changing his research focus. "George was able to launch two major and quite different fields of research at Princeton," said Stewart Smith, who now holds the Class of 1909 professorship in physics. "He applied the outstanding work he had done in particle detection to systems in biology and medicine and, in doing so, originated the field of biophysics at Princeton."

Smith, who earned his Ph.D. from Princeton in 1966 and then joined the faculty, said that Reynolds again put his formula to work on this emerging area of the discipline: "He realized the potential of it and the value of it and brought in key researchers, and we've had a very successful activity ever since."

Reynolds' later research focused on applying image intensification techniques to biological observations, including bioluminescence and X-ray diffraction. This work led to an appointment as a member of the Corporation of the Marine Biological Laboratory in Woods Hole, Mass., where he was a principal investigator during the course of 31 summers. He also was an adjunct scientist at the Woods Hole Oceanographic Institution.

Beginning in 1970 -- with the advent of the American environmental movement -- Reynolds served as director of Princeton's newly established Center for Environmental Studies for three years, focusing attention on the environmental effect of energy production, distribution and consumption.

Reynolds was a fellow of the American Physical Society and the American Association for the Advancement of Science and a member of the Biophysical Society, American Society for Photobiology and New York Academy of Science. In 1974, he was named to the Rutgers University board of trustees and chaired its research and graduate education committee. He also served on advisory panels for many other universities, government agencies and laboratories.

Reynolds had a longstanding interest in music, and played the violin and viola. He was the first faculty member to perform in the physics department's annual music recital, according to Piroué.

"George was a wonderful person, a no nonsense yet generous colleague, and so utterly dependable," he added. "George was an early riser, always went home for lunch and remained loyal to the end to his ... slide rule and his old briefcase. He will be sorely missed."

Reynolds is survived by his wife of 61 years, Virginia, who was a librarian for many years at Princeton Day School; four sons, G. Thomas of Skillman, N.J., Richard of Boulder, Colo., Robert of Woods Hole, Mass., and David of the Woodlands, Texas; and six grandchildren.

A service of remembrance is scheduled for 11 a.m. Monday, April 25, at Trinity Church,  33 Mercer St., Princeton. In lieu of flowers, the family asks that memorial contributions be made to: the Hospice Memorial Fund, 253 Witherspoon St., Princeton, NJ 08540; or the Princeton University Department of Physics to support its annual music recital.

Nozomi Ando: Breaking free with a love of chemistry