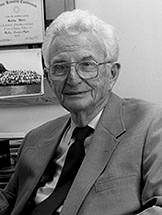 Princeton University nuclear physicist Rubby Sherr, whose work on the Manhattan Project helped usher in the Atomic Age and whose academic publications span nearly 80 years, died July 8 of natural causes at the Quadrangle independent-living community in Haverford, Pa. He was 99.

Colleagues and family describe Sherr — whose name is pronounced "Ruby" — as a tireless researcher with an engaging personality. He was a raconteur and connoisseur of jokes, fly-fishing and folk songs whose exploration of nuclear physics persisted until shortly before his death. Sherr published his first paper in 1936 while a graduate student at Princeton, and published his last six papers this year. He spent nearly 40 years at Princeton, joining the faculty in 1946 and transferring to professor of physics, emeritus, in 1982.

Early in his career, Sherr witnessed one of the most seminal events of human history: the first atomic explosion, known as "Trinity." In 1944, Sherr, then affiliated with the Massachusetts Institute of Technology, was sent to the Los Alamos Laboratory in New Mexico as part of the team charged with developing the "trigger," or initiator, for the plutonium-fired atomic bomb being produced under the Manhattan Project (a uranium-fired bomb also was underway). He was on site July 16, 1945, when, using the initiator design Sherr had developed, the plutonium bomb was detonated, heralding the dawn of the Atomic Age.

Sherr recalled the event in an interview with the Princeton Weekly Bulletin marking his retirement. He was monitoring the explosion through an oscilloscope when the observation bunker was flooded with bright light. Whereas project member and "father of the atomic bomb" J. Robert Oppenheimer recalled a line from the Hindu scripture Bhagavad Gita — "Now I am become Death, the destroyer of worlds," — Sherr said:

"My first reaction was to yell, 'Who the hell turned on the lights!' Then I looked outside and thought, 'This is the greatest scientific experiment of all time' — at least, it was certainly the biggest. Then the horror sank in that the thing had actually worked, followed by relief that the atmosphere hadn't ignited as some had feared it would."

As a researcher, Sherr focused on the physics, structure and decay of light atomic nuclei. Among his achievements, Sherr in 1953 provided evidence of "Fermi's interaction," the 1933 theory of Italian physicist Enrico Fermi that subatomic particles known as fermions have a role in beta decay, which is when an atom casts out electrons and positrons — known as beta particles — and can decay into other elements. In 1947, Sherr had reported the independent invention of a scintillation counter (it turned out to be one of many), which detects and measures ionizing radiation.

Although nuclear physics became outmoded in later decades, recent advances in technology allowed Sherr to revisit old problems, said H. Terry Fortune, a professor of physics at the University of Pennsylvania and Sherr's frequent co-author during the past 15 years. Fortune and Sherr calculated the properties of "nuclei far from stability," or nuclei with unusual ratios of protons and neutrons. They focused on "mirror nuclei," pairs of atoms where the number of protons in one nucleus matches the number of neutrons in the other, and vice versa, Fortune said. The properties of these nuclei had been elusive for decades, but the technology needed to produce and study them did not exist until recently. Now that the nuclei can be experimentally explored, Fortune and Sherr would calculate these properties for other scientists to confirm, Fortune said.

"It's the application of an existing technique to a new set of nuclei, nuclei that were not reachable until very recently," Fortune said. "Many of these problems have been around a long time. The solutions weren't relevant until the techniques [for producing such nuclei] advanced. Once these nuclei were being sought, people wanted to know what their properties would be and we calculated them for them."

In 1965, Fortune was a graduate student at Florida State University when he met Sherr, who was in his early 50s. After a short exchange of ideas, the two became close friends despite their age difference. Sherr took a keen interest in Fortune's career and served as a kind of father figure. They only collaborated on research after Sherr retired from Princeton. The two met regularly to work on projects and papers after Sherr moved to the Quadrangle community in 1998, and they had their last work session June 15. Fortune said that the key to Sherr's longevity as a researcher was a dogged focus and vast knowledge of the latest research in physics.

"He was single-focused, whether it was an experimental technique or a theoretical problem. He had a great technique of focusing on the meat of a problem and not getting distracted by side issues," Fortune said.

"He also was a great reader of the literature. If you ran into him at a physics conference he was the guy who knew what everybody else was doing," Fortune said. "Physics was his hobby. Reading and doing calculations were his hobby. We exchanged emails [about our work] up until he went to the hospital in late June."

Sherr had a broad interest in physics and the work of his colleagues, said Professor of Physics Frank Calaprice. In 1970, Sherr had just finished updating Princeton's cyclotron — a type of low-energy particle accelerator — when Calaprice came to the University as an assistant professor to work with atomic physicist Donald Hamilton. When Hamilton died in 1972, Sherr stepped in to support his junior colleague although their work did not overlap. They eventually became co-principal investigators of the cyclotron (which was shut down in the 1980s), working on grant and research proposals together.

"I was kind of left alone. I had my own program, but there was a lack of a senior faculty member," Calaprice said. "Rubby took a very general interest in my work. I always felt that I was part of the nuclear physics group in a very sincere way and made it my new home. Our relationship was always friendly and we never had a tense moment over anything. We were both keenly interested in what the other was doing."

Sherr drew energy from his natural curiosity, which extended beyond physics, Calaprice said. "I don't know what came first, whether it was his interest in science that kept his brain so functional, or that his brain was so functional that it maintained that interest," Calaprice said. "I'd like to think that it was his keen curiosity that kept him going, about nature and wondering about it and thinking about it."

Sherr successfully applied his mind beyond his immediate discipline. In 1941, The New York Times reported that Sherr, then an instructor at Harvard University, had transmuted mercury into platinum and gold — a tweak of physics that was close enough to alchemy to be notable. In 1953, Sherr was granted a patent for a kind of Doppler radar that detected moving objects on the ground — a precursor to the radar gun that he had begun work on for the military during World War II.

"He would joke that when you got a speeding ticket it was his fault," said Sherr's daughter Frances "Fran" Sherr. She said that outside of his lab, Sherr was known for his sense of humor and storytelling. Along with his wife Rita "Pat" Sherr (a former social-science librarian at the Institute for Advanced Study; Pat died in 1997), Rubby often hosted gatherings of colleagues and students, as well as musicians, artists and writers.

With folk-music collector and ethnomusicologist Alan Lomax, Sherr would lead singing circles or debate the proper lyrics to folk songs. He had long discussions with close friends and artists Gregorio Prestopino or David Stone Martin. Sherr learned fly-fishing while at Los Alamos, and often fished with crime-fiction writer Benjamin Appel. (Sherr and Appel also played a version of Scrabble in which no word could be real, but they had to have a definition that sounded reasonable given the word's construction.)

"Dad was many people: A dedicated physicist, a serious fly fisherman, very active with artists and musicians, and an avid birder," Fran said. "But his identity was as a physicist. His sense of self was as a physicist. The rest was just his personality. His life was very much his physics and the excitement of it, of solving problems. To the end."

Born in 1913 in Long Branch, N.J., Sherr entered college when his mother, a Lithuanian immigrant, personally took him in to enroll at New York University, Fran said. He received his bachelor's degree from NYU in 1934, then his doctorate in physics from Princeton in 1938.

Sherr is survived by his daughters Fran (Robert Hess) of Wynnewood, Pa., and Elizabeth Sherr Sklar (Lawrence Sklar) of Ann Arbor, Mich., as well as by his granddaughter, Jessica Sklar of Seattle.

A celebration of life in Princeton and at the Quadrangle will be planned. In lieu of flowers, donations can be sent to Quadrangle Board Education Fund, 3300 Darby Rd., Haverford, PA 19041, or to a preferred charity.