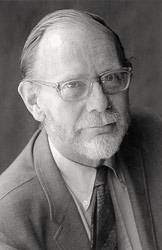 Walter Kauzmann, whose deep insights into the water-loathing properties of greasy molecules paved the way for the modern study of proteins, has died at age 92.

Kauzmann, the David B. Jones Professor Emeritus of Chemistry, who also discovered a puzzling behavior of glass that came to be known as the Kauzmann Paradox, died in his sleep at Stonebridge at Montgomery on Jan. 27. He had been suffering from pneumonia and had been in declining health for the past year.

A deep and abstract thinker, Kauzmann is best known for his seminal work in the 1950s on the hydrophobic effect, the phenomenon at work when oily molecules stick together and shun contact with water. The concept has been used widely since by scientists and, through Kauzmann's work, has helped explain one of biology's biggest mysteries -- why proteins fold the way they do. Significantly, Kauzmann was able to intuit -- without the benefit of modern imaging techniques -- how proteins, complex ribbons of matter, crinkle. The first protein structures were not determined through X-ray crystallography until later.

"Through pure thought and analysis of data, he was able to infer a major force that stabilizes the structure of proteins," said David Eisenberg, a professor of chemistry and biochemistry at the University of California-Los Angeles and a postdoctoral fellow in Kauzmann's lab from 1964 to 1966.

Kauzmann had been looking at data on what happens when hydrocarbons and other molecules are absorbed in water and other solvents. From that and his deep understanding of energy flow, Eisenberg said, Kauzmann was able to predict that a significant portion of the string of chemicals comprising proteins shuns water. And it is this shunning that causes proteins to fold into their complex individual shapes.

"All of our work on protein design rests on the concept that the hydrophobic effect is the driving force of protein folding," said Michael Hecht, a Princeton professor of chemistry who works on protein folding and design. "That Kauzmann was able to elucidate this concept even before the first three-dimensional structure of a protein had been solved demonstrates his exceptional understanding and intuition about fields ranging from thermodynamics to biology."

Proteins are the principal molecular machines in all living systems. The ability of proteins to function correctly and sustain life requires that they fold into their correct structures. "In the aqueous environment of cells, this folding is driven primarily by the hydrophobic effect as explained by Walter Kauzmann over five decades ago," Hecht said. "In the intervening 50 years, protein science has progressed to the point where it is now possible to go beyond observing natural proteins; indeed, it is now possible to design proteins from scratch."

Kauzmann was born on Aug. 18, 1916, in Mount Vernon, N.Y., to Albert Kauzmann and Julia Kahle Kauzmann, a homemaker, and raised in nearby New Rochelle. His father, a German immigrant who operated a gem-importing business in lower Manhattan, would often bring his son to work on Saturday mornings. They would spend the afternoon at the American Museum of Natural History or attend a matinee at the Metropolitan Opera, giving him a lifelong love of science and music.

He earned his undergraduate degree in 1937 from Cornell University, which he attended on a full scholarship. While working on his doctoral degree at Princeton University, he struggled at first in organic chemistry before finding his niche in physical chemistry. After earning his Ph.D. in 1940, he did postdoctoral work as a research fellow with Westinghouse in Pittsburgh.

There he published a paper on "the nature of the glassy state and the behavior of liquids at low temperatures." His description of the puzzling behaviors in some types of liquids as they changed between liquid and solid states became known in scientific circles as the Kauzmann Paradox. It's an eponym he found embarrassing, according to his children. He may have been the first to write about it, but others had observed the phenomenon too, he told them.

Kauzmann went on to work on explosives at the National Defense Research Council laboratory in Bruceton, south of Pittsburgh. He studied the flute to lighten the dreariness of the soot-laden countryside. Plagued by constant colds and sinus infections, he was desperate to leave. In 1944, he joined the classified Manhattan District Project in Los Alamos, N.M., where he was assigned the task of producing detonators for the experimental atomic bombs. He witnessed the bomb test on July 16, 1945, on a secluded hill safely outside the range of the radiation fallout.

In a 1996 letter to a grandnephew, he wrote, "We ... believed that if the atomic bomb could be made it was of the utmost importance that we exert every effort to make it and to use it before the present war was over. Then the world would know that this dreadful weapon had arrived on the scene and further that it is so dreadful that another world war would be unthinkable."

After the war, Kauzmann retreated to an isolated cabin in Colorado and immersed himself in learning the biochemistry of muscle movement. He joined Princeton's Department of Chemistry in 1946, and would remain there until his retirement in 1983. In 1950, he summoned the courage to ask out Elizabeth Flagler, a research assistant in the laboratory of biologist Frank Johnson. They were engaged 16 days later and married on April 1, 1951.

He wrote many books, including "Quantum Chemistry," and co-wrote "The Structure and Properties of Water," with Eisenberg, his former postdoctoral fellow. The text was re-issued in 2005 by Oxford University Press as part of its Classic Texts in the Physical Sciences series.

As a professor, he liked to think out loud in front of a blackboard, surrounded by students who would join him in his brainstorming journey. If a student had a question, Kauzmann was willing to sit down and work it out, no matter how long it took. Many of his students went on to become distinguished scientists, including Eisenberg, Bruce Alberts, editor-in-chief of the journal Science, and the late Paul Sigler, a structural biologist. "He could give you the confidence that you could work out problems for yourself," said Eisenberg, who was the inaugural speaker at Princeton last October for the Walter Kauzmann Lectureship in Chemistry, an endowed annual lecture established by the department in his honor.

Kauzmann was a member of the American Academy of Arts and Sciences and the National Academy of Sciences. He won many awards, including the inaugural Linderstrøm-Lang Prize, given for outstanding contributions in the areas of biochemistry or physiology. At Princeton, he served as chair of the Department of Chemistry from 1964 to 1968. He also chaired the Department of Biochemical Sciences from 1980 to 1981. He received the Stein and Moore Award of the Protein Society in 1993 "for his seminal work on the physical chemistry of proteins."

He was devoted to his family. They spent many summers on Cape Breton Island in Nova Scotia where he hacked foliage to make nature trails and enjoyed studying the catapult constructed for him by his sons and Stephen Pacala, his son-in-law and the Frederick D. Petrie Professor in Ecology and Evolutionary Biology at Princeton. He collected water samples to study salinity and installed a tide gauge to track water levels and storm surges.

Friends and family came to expect an unusual annual bounty from him -- homemade candied grapefruit peel. "You either love the taste, or you don't get what the fuss is about," said his daughter, Lise Pacala. "He would say, 'Some of my best friends don't like it, but I don't hold it against them.'"

He was predeceased by his wife of 53 years, Elizabeth, in 2004. His survivors include sons and daughters-in-law Peter and Maria Kauzmann of Skillman, N.J., and Eric Kauzmann and Valerie Mauksch of Fort Collins, Colo.; daughter and son-in-law Lise and Steve Pacala of Princeton; eight grandchildren; and many nephews and nieces.

A memorial service will be held at the Princeton University Chapel at 1:30 p.m. Friday, March 27. The family suggests that memorial contributions be made to a charity of the donor's choice.