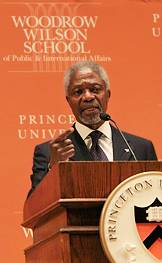 United Nations Secretary- General Kofi Annan spoke in Richardson Auditorium on Tuesday on the urgent need to confront the danger of nuclear weapons. The speech was the second of four public addresses he is giving to present his parting thoughts to the international community after 10 years in office.

At left and below: As part of the event, undergraduates presented Annan with the Crystal Tiger award, which recognizes an individual "who has had a transformative impact on our lives, our communities and our values," said senior Cindy Chou of the Crystal Tiger award committee. Senior Russ Barnes handed Annan the award. 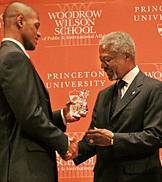 Bottom left: Students gathered around Annan to ask questions at a reception after the address.

The full text of Annan's remarks is available on the United Nations website. To view a webcast of the event, visit the University's Webmedia site.

United Nations Secretary-General Kofi Annan said Tuesday during a speech at Princeton University that there is an urgent need to confront the danger of nuclear weapons, and both disarmament and nonproliferation must be pursued simultaneously to achieve progress on either front.

"We are asleep at the controls of a fast-moving aircraft. Unless we wake up and take control, the outcome is all too predictable," Annan said. "We cannot choose between nonproliferation and disarmament. We must tackle both tasks with the urgency they demand."

As part of the event, undergraduate students presented Annan, who steps down as secretary-general in December, with the Crystal Tiger award, which recognizes an individual "who has had a transformative impact on our lives, our communities and our values," said senior Cindy Chou of the Crystal Tiger award committee.

"Throughout the last decade we have seen your efforts in creating the Global AIDS and Health Fund to combat diseases," Chou told Annan. "Your work in promoting aid in developing countries has reinforced our commitment to changing our own communities for the better. Above all, Mr. Annan, your life of service encourages us to tackle issues hindering international peace and security."

Annan, a native of Ghana, is the seventh secretary-general of the United Nations, having begun his first term in January 1997. His second term began on Jan. 1, 2002, and ends on Dec. 31 of this year. His priorities have included encouraging and advocating human rights; restoring public confidence in the United Nations; and strengthening the United Nations' work in the areas of development, international peace and security.

Annan's speech, delivered in Richardson Auditorium in Alexander Hall, was the second of four public addresses he is giving to present his parting thoughts to the international community after 10 years in office. The first, which focused on development, was given Nov. 16 at the Africa Development Forum in Addis Ababa, Ethiopia. On Dec. 8 he will address human rights in a speech in New York, and on Dec. 11 he will discuss global governance at the Truman Library in Missouri.

The theme of the Princeton talk was peace and security. Annan was introduced by Anne-Marie Slaughter, dean of the Woodrow Wilson School of Public and International Affairs, which hosted the event.

Annan outlined some of the roadblocks to progress on the issue of nuclear weapons. He said there is "a total lack of any common strategy" among nations on the issue. Instead, there are two camps into which governments fall: those that advocate nonproliferation first (mainly states that possess nuclear weapons and their supporters) and those that promote disarmament first.

"Each side waits for the other to move first," Annan said. "The result is that 'mutually assured destruction' has been replaced by mutually assured paralysis. This sends a terrible signal of disunity and ...  [i]t creates a vacuum that can be exploited."

The debate between the two sides, he said, is over the question: "Are weapons a cause or symptom of conflict?" They can be both, Annan said. "Arms build-ups can give rise to threats leading to conflict; and political conflicts can motivate the acquisition of arms."

Annan urged the advocates of nonproliferation first to recognize that despite efforts to reduce the number of nuclear weapons, stockpiles "remain alarmingly high" and many countries are modernizing their nuclear arsenals or delivery systems. By "clinging to and modernizing their arsenals, even when there is no obvious threat to their national security that nuclear weapons could deter, nuclear-weapon states encourage others — particularly those that do face real threats in their own region — to regard nuclear weapons as essential, both to their security and to their status," he said. He called on states with nuclear weapons to develop specific timetables for disarmament and to make a joint announcement of their intention to eliminate all nuclear weapons.

Annan asked advocates of disarmament first to "support even small steps to contain proliferation" and to "acknowledge disarmament whenever it does occur." He also asked them to support efforts to guarantee that all states "have access to fuel and services for their civilian nuclear programs without spreading sensitive technology." And, he added, "do not encourage, or allow, any state to make its compliance with initiatives to eliminate nuclear weapons, or halt their proliferation, conditional on concessions from other states on other issues. The preservation of human life on this planet is too important to be used as a hostage."

Annan said he views nuclear weapons as "the greatest danger" to the world because they present "a unique existential threat to all humanity"; the rise of terrorism "greatly increases the danger that they will be used"; and there is "a crisis of confidence" in the nonproliferation movement, precipitated by North Korea withdrawing from the Nuclear Nonproliferation Treaty and India, Israel and Pakistan failing to join it.

He concluded by appealing to young people to "bring your energy and imagination to this debate. Help us to seize control of the rogue aircraft on which humanity has embarked, and bring it safely to landing before it is too late."

Following the address, Annan took questions from the audience on topics ranging from the environment to Darfur.

Several of the Princeton students in the audience said they were glad Annan had addressed the issue of nuclear weapons. "He covered an important issue to our generation that we need to get on top of," said senior Nelson Chiu. 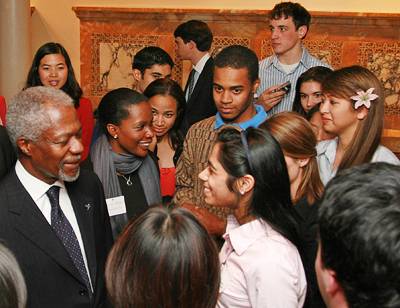