Bruce Blair, an internationally renowned scholar and expert on the risks of accidental nuclear war, died on July 19 in hospital in Philadelphia following a severe stroke. He was 72.

Blair, who was based at Princeton University’s Program on Science and Global Security (SGS), spent his professional career exploring and explaining the largely unforeseen risks of accidental nuclear war. Blair revealed how these much-greater-than-expected risks were not an accident, but an inevitable outcome of prevailing nuclear postures and policies, and systems of nuclear command and control. 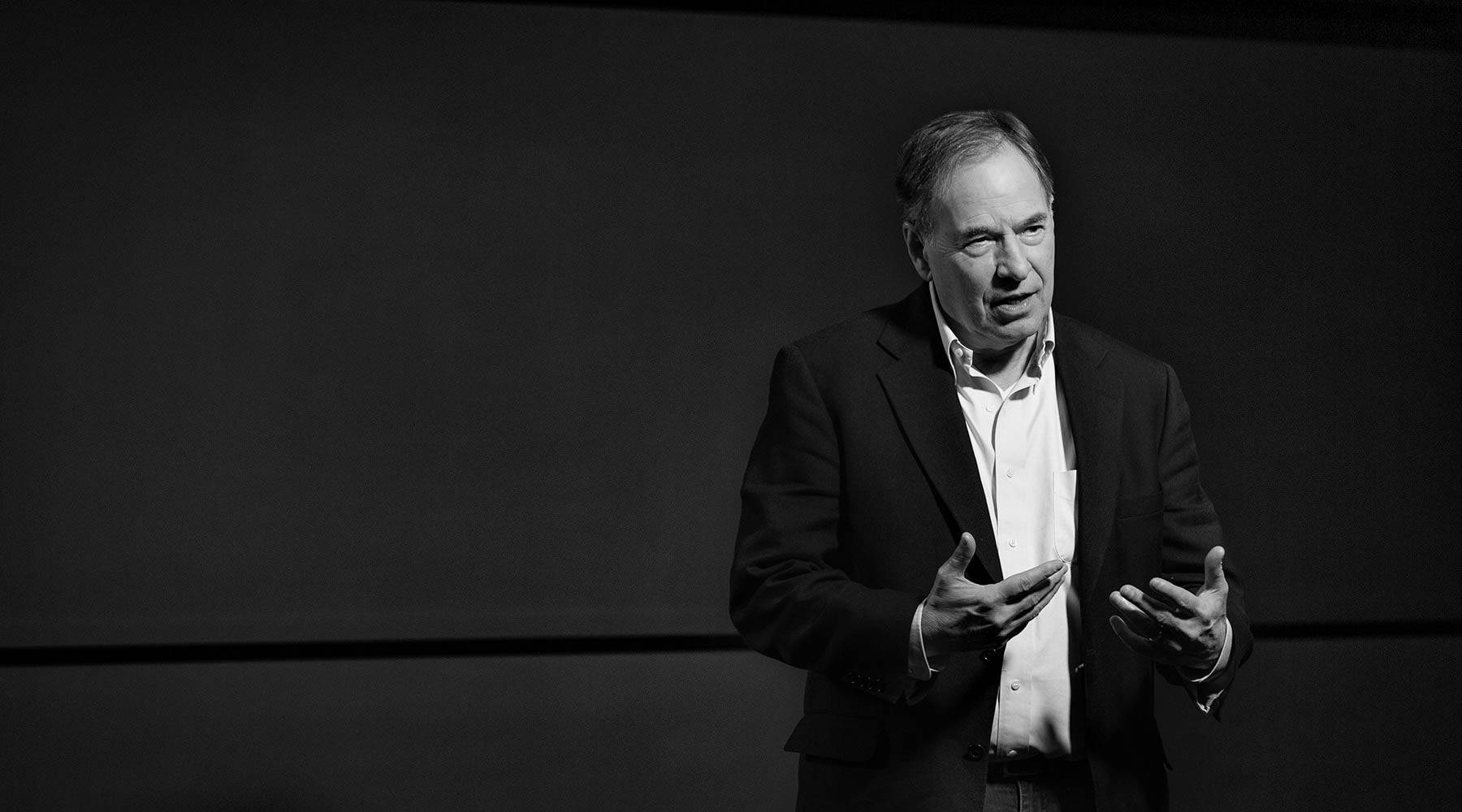 He was particularly concerned about the launch-on-warning posture of Russian and U.S. nuclear-armed ballistic missiles, which he described as a “hair-trigger” posture, as well as policies for the first use of nuclear weapons, which originated in the Cold War and remain in place today. His work generated and informed important and enduring U.S. and global nuclear policy debates on these dangers and ways to address them.

“One would be hard pressed to find anyone else in our community who has had a greater impact on reducing the risks from nuclear weapons,” said Alexander Glaser, co-director of SGS and associate professor of mechanical and aerospace engineering and international affairs. “Bruce was always one or two steps ahead of everyone else, and always focused on ‘moving the needle’ — as he used to say — in Washington, D.C., and elsewhere. We learned so much from him, and I consider it a great privilege to have been part of the same team with Bruce.”

Along with his scholarship, Blair forcefully and persistently advocated to policymakers and the public for shifting to safer nuclear postures, for a policy of no-first-use of nuclear weapons, for deep cuts in arsenals, and for the ultimate elimination of all nuclear weapons. To this end, Blair created and led Global Zero, an international organization including almost 300 former high-level national security officials from dozens of countries, to devise practical steps toward nuclear disarmament.

In 2013, Blair joined the research staff at SGS, which is based at the Princeton School of Public and International Affairs, where he continued to lead Global Zero, developing and promoting ideas for crisis management between nuclear-armed states and nuclear reductions and measures to reduce the risks of accidental, mistaken, and unauthorized launch of nuclear weapons.

His work included creating the Nuclear Crisis Group of about 20 former officials monitoring potential nuclear flashpoints, prepared to propose de-escalatory moves. Former Commander in Chief of the U.S. Strategic Command Gen. James E. Cartwright became a close partner to Blair in these efforts after Cartwright stepped down as Vice Chairman of the U.S. Joint Chiefs of Staff in 2011. “Bruce understood the existential threat of nuclear weapons. His loss will be felt throughout the national security community,” Cartwright said.

Blair was born in Creston, Iowa, on Nov. 16, 1947. His father, Donald Blair, and mother, Betty Anne Bruce, were also born in Iowa. Donald Blair served in the U.S. Army Air Corps in World War II, flying 17 missions in a Boeing B-17 Flying Fortress over Germany.

Blair graduated from the University of Illinois in 1970 with a bachelor’s degree in communications and served in the U.S. Air Force from 1972 to 1974. This included serving as a launch-control officer in an underground bunker for a group of 10 Minuteman-II nuclear missiles with backup responsibility for 40 more missiles. These were stored in underground “silos” around Malmstrom Air Force Base. Each Minuteman-II carried a single warhead with 100 times the power of the Hiroshima warhead.

Later in his service, Blair served as a support officer for the Operation Looking Glass command posts based out of Offutt Air Force Base in Nebraska. During the Cold War, one of these aircraft were in the air at all times and could launch the Minuteman-II missiles if one of the launch-control facilities were destroyed by a Soviet-first strike or failed.

The 24-hour shifts underground gave Blair ample time to wonder about the possible circumstances under which he might be ordered to launch missiles that could kill millions of Russians, Chinese or East Europeans, and whether that order might be issued by mistake. His missiles were put on higher alert by the Nixon Administration during the October 1973 Yom Kippur War between Israel, Egypt and Syria as a signal to the Soviet Union not to intervene on Egypt’s side.

After leaving the Air Force, Blair enrolled in Yale’s Ph.D. program in operations research. His graduate studies were interrupted for five years while he took leave to work at the Brookings Institution with John Steinbruner, a leading international security affairs and arms control scholar and educator who shared Blair’s concerns about accidental nuclear war.

From 1982 to 1985, Blair was project director of a review of U.S. nuclear command and control for U.S. Congress’ Office of Technology Assessment. After doing a classification review of Blair’s draft, the U.S. Department of Defense decided that this assessment of the vulnerabilities of U.S. nuclear command and control was too sensitive for Congressional consideration. They seized and shredded all copies of the manuscript.

In 1985, Blair published his Ph.D. thesis as the book “Strategic Command and Control: Redefining the Nuclear Threat.” This was the first of a series of studies, including “The Logic of Accidental Nuclear War” (1993) and “Global Zero Alert for Nuclear Forces” (1995).

In 1999, Blair received a MacArthur Fellowship, commonly known as a “Genius Grant,” for his work demonstrating the dangers of Cold War and post-Cold War nuclear command and control, which highlighted the role of human and technical error. Blair also received the award for his work on devising credible policy alternatives, including “de-alerting” nuclear weapons and changing nuclear decision-making processes to allow for careful and collective deliberation before any decision to launch could be made.

Blair used the funds from his MacArthur grant to create the World Security Institute, which he used as an umbrella for a number of organizations, including Global Zero and a news services publishing on security issues in Arabic, Chinese, Farsi and Russian. As part of this effort, Blair worked on and served as executive producer of the highly regarded documentary film “Countdown to Zero.” In 2011, Blair was appointed to the U.S. Secretary of State’s International Security Advisory Board, a small group of experts providing advice on nuclear arms control, disarmament, nonproliferation and international security.

More recently, Blair focused his attention on the need to strengthen checks and balances on the president’s unilateral power to order the use of nuclear weapons. His 2018 report “The End of Nuclear Warfighting: Moving to a Deterrence-Only Posture — An Alternative U.S. Nuclear Posture Review,” was a major study, laying the basis for revising the current U.S. nuclear posture and force structure, as well as reducing the risk of the use of nuclear weapons.

“Bruce was so persistent and creative in his efforts to reform U.S. nuclear weapons polices that it drove parts of the nuclear priesthood so crazy that at times they felt besieged by this one-man army. Had they listened instead, we would all be safer,” said Sharon Weiner, a visiting research scholar at SGS, who has worked in both houses of Congress, the Pentagon’s Joint Staff, and the White House Office of Management and Budget with nuclear weapon responsibilities.

Blair also extensively engaged former senior officials and military officers from Russia and China, as well as other nuclear-armed states, to renounce the first use of nuclear weapons and modify nuclear postures in ways that make such commitments credible. In his final years, Blair worked to avert a new nuclear arms competition at a time when the nuclear arms control regime has been collapsing.

View or share comments on a blog intended to honor Blair’s life and legacy.