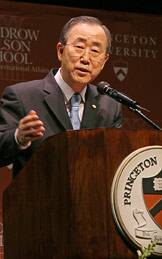 The coming year could be a make-or-break one for the world, according to U.N. Secretary-General Ban Ki-moon. In an address at Princeton Friday (April 17), he called for cohesive action by nations large and small to combat threats to social stability. Ban’s speech kicked off the 2009 Princeton Colloquium on Public and International Affairs.

The secretary-general of the United Nations issued an urgent plea Friday (April 17) to a Princeton University audience for support of his policy of a "new multilateralism," a program with an ambitious agenda to unite nations in tackling a host of destabilizing threats that endanger world order.

"Absent decisive action at this time, I am afraid we face the realistic prospect of our existing system unraveling," said Ban Ki-moon, the eighth U.N. secretary-general, in a speech that mixed grim statistics with hope and humor. He cited a litany of threats, including the spread of deadly disease, nuclear proliferation, food shortages, rising extremism and the global financial crisis, as factors that soon will produce a crisis of political instability.

A new multilateralism, he said, would build on the best approaches used by world leaders when they unified to address problems of the past, such as the social upheavals of World War II. At the same time, he said, such efforts must incorporate the realities of the present. The United Nations, he noted, has grown from 51 member-states at its founding to 192 members today, all of which must be included in future efforts to counter negative forces. In addition, the leaders of today face a wide range of challenges, from hunger to climate change.

"These threats are contagious -- they do not recognize borders," Ban said. "They affect everyone everywhere and cannot be addressed by any one country in isolation." 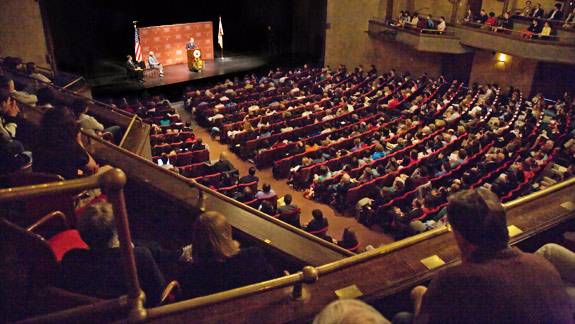 A crowd of nearly 1,000 gathered on campus at the McCarter Theatre Center's Matthews Theatre to hear Ban discuss world issues and strategies to reduce conflict.

Ban's speech, titled "The Imperative for a New Multilateralism," was the keynote address of the 2009 Princeton Colloquium on Public and International Affairs. He delivered it to a crowd of nearly 1,000 gathered on campus in the McCarter Theatre Center's Matthews Theatre.

Princeton President Shirley M. Tilghman noted the prescience of the theme of the colloquium, "Prosperity or Peril? The Next Phase of Globalization" in her introductory remarks. 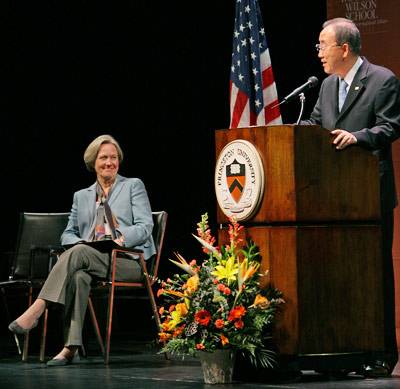 Princeton University has a long and honorable history in igniting important ideas in world government, according to the secretary-general. University President Shirley M. Tilghman (left) said Ban's appearance on campus affirmed Princeton's commitment to "serve our nation and all nations by encouraging the interplay of ideas in forums such as this."

"When this topic was chosen many months ago, I suspect no one could have foreseen how urgent it would become," Tilghman said. "Whether 'prosperity' or 'peril' prevails, the worldwide economic crisis has vividly underscored the degree to which the world has indeed shrunk, and its people are so interdependent."

Tilghman said the secretary-general's presence on campus continued a tradition that stretched back to Trygve Lie, the first secretary-general of the United Nations who received an honorary degree from Princeton in 1946. Ban's appearance, Tilghman said, was an "affirmation of Princeton's commitment to serve our nation and all nations by encouraging the interplay of ideas in forums such as this."

Ban, the first Korean to lead the United Nations, was elected to his present post in 2006. At the time of his election, he was minister of foreign affairs and trade for the Republic of Korea (South Korea). His three decades as a diplomat have included postings in New Delhi, Washington, D.C., and Vienna, and responsibility for a variety of portfolios, including foreign policy adviser to South Korea's president, chief national security adviser to the president, deputy minister for policy planning and director-general of American affairs.

Students from the Woodrow Wilson School of Public and International Affairs met with Ban at a reception following his speech. In his remarks, Ban encouraged the students' interest in world affairs and described them as the world's future leaders.

He praised Princeton for its tradition of leadership in world affairs, peppering his speech with references to Woodrow Wilson, the U.S. president and former Princeton president and Princeton alumnus. And he urged the many students present to maintain their interest in international affairs and government. He also teased them, saying that he may want to return to Princeton to teach someday and hoped that he would get the same kind of warm reception from students then.

Powerful ideas, he said, can lead societies in positive directions. Wilson's political philosophy of self-determination, he said, inspired the people of Korea in another hemisphere to seek independence from colonial rule. Syngman Rhee, the first president of South Korea, earned his Ph.D. in politics from Princeton in 1910 and was stirred by much of what he learned at Princeton, Ban said. 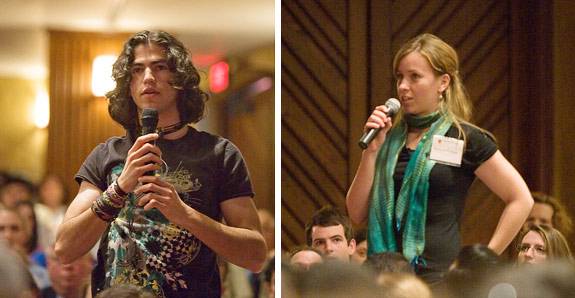 Students queried the U.N. secretary-general on a host of topics, from deciding how to give small countries a larger role in decision-making in organizations like the United Nations to minimizing rivalries between agency workers in the field.

Before he departed, he took five questions from students in the audience, answering inquiries on a range of topics, from how to give small countries a larger role in decision-making to the constitutionality of a political movement in Madagascar. When one student asked how Ban could improve unity among U.N. workers in the field, he praised her for her insight and knowledge of the organization.

Rachel Chen of Warren, N.J., who has been accepted to the University and was visiting as part of Princeton Preview, said she had been enjoying the beauty of the campus but was worried she would be too removed from the rest of the world. Ban's speech, she said, changed all that for her. "Hearing him and how he is working closely with other world leaders was really great," she said. 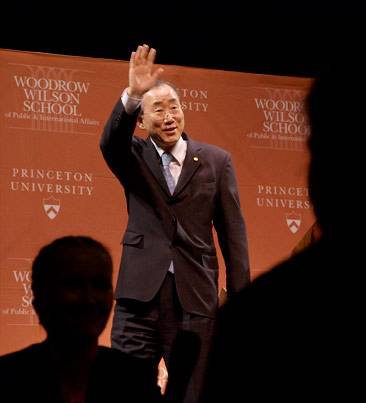 Ban was elected U.N. secretary-general in 2006 but has played an active role on the international stage for decades. In his speech at Princeton, he urged nations to work together to forge a "new multilateralism" that will confront major issues, from climate change to unemployment.

Princeton freshman Ryan Corey, who intends to major in electrical engineering, enjoyed the give and take of the question-and-answer session Ban conducted with students at the close of his speech. "The students asked very good questions," he said. "And he had very good answers for them. He didn't talk in circles like some leaders do -- he actually addressed them and touched on a lot of things I think are important."

Students from the Woodrow Wilson School of Public and International Affairs also met with Ban at a reception following the speech. The colloquium, which is being hosted by the Wilson School, will run through Saturday. Attendees are examining whether and how the increasingly interconnected forces of globalization will result in a more stable and prosperous global society, or instead enable instability and violence to spread more easily across borders.