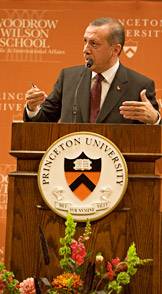 In an address at Princeton on Sept. 23, Turkish Prime Minister Recep Tayyip Erdoğan urged leaders around the world to reject conflict in favor of peace and trust to create a "new global order." Erdoğan delivered a wide-ranging speech to a near-capacity audience in Richardson Auditorium, covering the role of Turkey and other nations in promoting international stability as well as key domestic and regional issues facing his country.

Turkish Prime Minister Recep Tayyip Erdoğan pushed his counterparts around the world to pursue a "new global order" based on peace and trust rather than conflict in an address Wednesday, Sept. 23, at Princeton University.

"We are confronted with quite a number of important problems, such as wars, economic crises, hunger, poverty, security of energy, terrorism and climate change," Erdoğan told the near-capacity audience in Richardson Auditorium in Alexander Hall. "None of these are problems that we cannot solve."

To do so, he said, "We must move from the understanding of a world solely based on a perception of risk and threat to a global order which is based on solidarity and trust."

Outlining basic principles for today's globalized world, Erdoğan said, "We have a number of intertwined relations -- they should not be seen as a threat, but rather [as] an opportunity. At this juncture, global institutions such as the United Nations and other international organizations have an even bigger role to play." Economic cooperation, cultural understanding and universal acceptance of liberty, human rights, privacy and free expression also must form the foundation of the new global order, he said.

Erdoğan, along with a delegation of top Turkish officials, visited Princeton while in the United States this week for meetings of the United Nations General Assembly in New York and the G-20 summit of the world's leading economies in Pittsburgh. In addition to addressing the role of Turkey and other nations in promoting global stability and prosperity, his wide-ranging remarks touched on critical domestic and regional issues facing his country.

In her introduction of Erdoğan, who has led Turkey since 2003, Princeton President Shirley M. Tilghman noted, "Turkey occupies a critical place in the world, bridging, as it does, two continents -- and not just geographically. It looks both east and west, and, across the centuries, its history has been inextricably entwined with both the Christian and Muslim worlds. Today Turkey ... is both a key American ally and an increasingly influential regional power with an important role to play in securing peace and prosperity along its borders -- from Iraq to Georgia -- a region beset by ethnic, religious and political tensions." 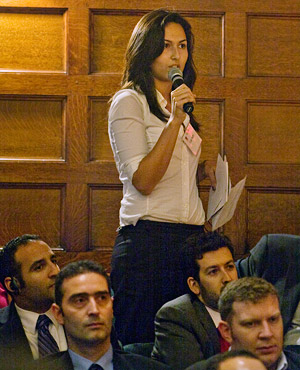 Students posed questions to Erdoğan at the end of his address, which was sponsored by the Woodrow Wilson School of Public and International Affairs. Joshua Walker, a graduate student in the Wilson School, said after the event, "I think it was great for the students to hear him speak and that the students got to ask him questions. He engaged us directly."

Turkey is engaged in talks with Armenia, mediated by Switzerland, to end tensions that have spanned a century and hinge upon whether a World War I-era massacre of Armenians constitutes genocide. Erdoğan said that "if we don't see prejudice or some domestic political considerations at play," he is hopeful an agreement to establish diplomatic ties and open its border with Armenia could be taken to the Turkish Parliament to be ratified next month. He also discussed relations with neighboring countries such as Greece, Bulgaria, Russia, Ukraine, Azerbaijan, Syria, Iran and Iraq, illustrating his country's central geographical and political role in global affairs.

Erdoğan also expressed strong frustration over Turkey's 50-year effort to be granted membership in the European Union and its predecessor organization, the European Economic Community. "There is no other country which has had to wait that long. ... But there are unfortunately many weak pretexts [and] excuses which are being used to put some obstacles" in Turkey's path, he said.

Following his hourlong address, which was sponsored by the Woodrow Wilson School of Public and International Affairs, Erdoğan took questions from students and met briefly with students and faculty at a reception.

Wolfgang Danspeckgruber, who teaches international relations in the Wilson School and directs the University's Liechtenstein Institute on Self-Determination, brought some of his students to the event. He said the prime minister delivered "a very powerful speech" that touched on a surprisingly broad range of critical global issues.

"I believe that he very clearly demonstrated that Turkey is a major actor in the region," Danspeckgruber said. 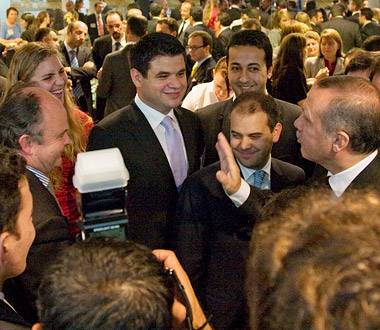 Princeton faculty and students greeted the prime minister at a reception after his hourlong talk. Erdoğan came to the University while in the United States for meetings of the United Nations General Assembly and the G-20 summit of the world's leading economies.

Joshua Walker, a doctoral candidate in the Wilson School who studies Turkish foreign policy, extended the initial invitation for Erdoğan to visit Princeton while he was in Turkey this summer meeting with Foreign Minister Ahmet Davutoğlu as part of his research.

Walker called Erdoğan's address a "tour de force" and said it was a valuable experience for the Princeton audience to hear the prime minister discuss foreign policy priorities in detail. "He believes that Turkey can play a constructive role in the peace and prosperity in the world," Walker said.

He added, "I think it was great for the students to hear him speak and that the students got to ask him questions. He engaged us directly."

Aytug Göksu, who works in Turkey's ministry of foreign trade and is at the Wilson School this year studying for a master's in public affairs, said Erdoğan's visit illustrated that Turkey is at an important juncture domestically and internationally.

"Inside Turkey, things are changing now about minorities, human rights issues and democracy," Göksu said. In discussing Turkey's role on the global stage, "he gave simple but reasonable examples as to what's going on in the world now. I think that was really important for students who are following international relations," Göksu said.

Erdoğan delivered his talk in Turkish, and it was simultaneously translated into English to the audience via wireless receivers with earpieces. The talk will be archived for later viewing on Webmedia. 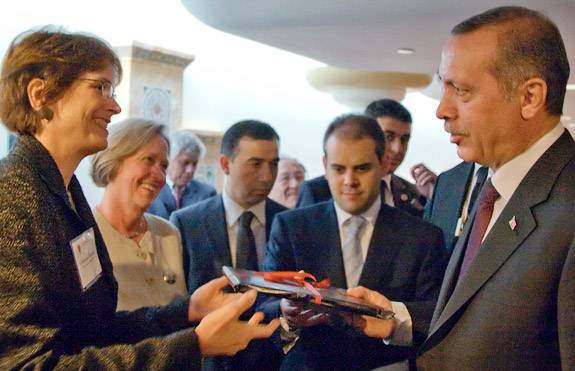