by the Woodrow Wilson School of Public and International Affairs 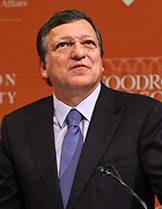 José Manuel Barroso, former president of the European Commission, has been appointed the Frederick H. Schultz Class of 1951 Visiting Professor of International Economic Policy and a policy fellow of the Liechtenstein Institute on Self-Determination (LISD) at Princeton University. This appointment in the Woodrow Wilson School of Public and International Affairs began Feb. 1.

While at Princeton, Barroso will teach at the Woodrow Wilson School, work with students and deliver public talks. He will also undertake special work within LISD on the European Union (EU) in international affairs, particularly in its relations with Russia, the United States and China.

"We are delighted and honored to have the former president of the European Commission with us at the LISD and very much look forward to benefiting and learning from his experience and insights," said Wolfgang Danspeckgruber, director of LISD. "His knowledge and understanding will add an unparalleled dimension to the institute's ongoing research on diplomacy and international negotiations."

Barroso, former prime minister of Portugal, became president of the European Commission in 2004 and was reelected to the post in 2009, serving in that role until fall 2014. The European Commission is the executive body of the EU and is responsible for proposing legislation, implementing decisions, upholding the Union's treaties and the day-to-day running of the EU.

Barroso's political career began in 1980 when he joined the Social Democratic Party (PSD), a major social-democratic political party in Portugal. He was named president of the party in 1999 and was re-elected three times. During the same period, he served as vice president of the European People's Party. As state secretary for foreign affairs and cooperation, he played a key role as mediator in the signing of the Bicesse Accords, which laid out a transition to multi-party democracy in Angola in 1991, and, as minister for foreign affairs, he was a driving force in the self-determination process in East Timor (1992-95), a country in Maritime Southeast Asia. Under his leadership, the PSD won the general election in 2002, and Barroso was appointed prime minister of Portugal in April of that year. He remained in office until July 2004 when he was nominated by the European Council and elected by the European Parliament to the post of president of the European Commission.

Barroso has been awarded numerous honorary degrees and has received many international awards and honors.