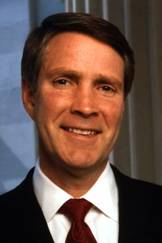 He will be appointed for the 2007-08 academic year as the Frederick H. Schultz Class of 1951 Professor of International Economic Policy, with the rank of lecturer of public and international affairs. Frist, 55, will teach a graduate course in the Woodrow Wilson School on health policy during the fall semester and an undergraduate course on a similar subject in the spring.

"We are very pleased to welcome Bill Frist back to Princeton and the Woodrow Wilson School," said Anne-Marie Slaughter, dean of the school. "His years of experience in public service as a doctor and as a leader in the U.S. Senate make him an ideal practitioner-professor. Our students will benefit from his perspectives both as a healer and as Senate majority leader."

Frist won election to the U.S. Senate as a Republican in 1994, pledging to serve only two terms and becoming the first practicing physician to serve in that body since 1928. His Republican colleagues unanimously elected him as the 18th majority leader in 2002, just eight years after his election and with less total time served in Congress than anyone ever to hold the position. Frist voluntarily stepped down as majority leader and left the Senate in January 2007 to return to Nashville as a private citizen.

"It's an honor to return to the Woodrow Wilson School as a member of its distinguished faculty," Frist said. "My journey with the students will bridge the practical and the theoretical as we explore together the new explosion in health diplomacy, the use of medicine as a 'currency for peace,' and health care reform both here at home and abroad."

Since leaving politics Frist has joined former U.S. Senate Majority Leader Tom Daschle to co-chair the ONE Campaign presidential initiative, ONE Vote '08, a bipartisan effort to make global health and extreme poverty foreign policy priorities in the 2008 presidential election. He also serves on the boards of the Hope Through Healing Hands Foundation, Africare, the Smithsonian Museum of Natural History, the Center for Strategic and International Studies, the U.S. Holocaust Memorial Museum's Committee on Conscience, the Clinton Global Initiative's Global Health Working Group and the Mountain Gorilla Veterinary Project.

While at Princeton, Frist spent his junior and senior years specializing in health care policy and international relations at the Woodrow Wilson School, graduating in 1974.

His Wilson School experience led him to a summer internship in Washington, D.C., with veteran Tennessee Congressman Joe Evins, a Democrat. The then-dean of Tennessee's Congressional delegation counseled Frist that should he ever want to serve in Congress, he should first excel in a profession other than politics.

After graduating from Princeton, Frist earned his medical degree at Harvard Medical School. He graduated with honors in 1978 and spent the next six years in heart surgery training at Massachusetts General Hospital in Boston and Southampton General Hospital in England. His training culminated with his selection as chief resident in heart and lung surgery at Massachusetts General.

In 1985 Frist joined the team of heart transplant surgeon Dr. Norman Shumway at Stanford University. After completing his fellowship, Frist returned to his hometown of Nashville to serve as an assistant professor of surgery at Vanderbilt Medical School with a goal to create the region's first multi-organ, multidisciplinary transplant center.

Frist became the director of Vanderbilt University Medical Center's heart and lung transplantation program in 1986, and founded the multi-organ Vanderbilt Transplant Center three years later. Under his leadership, the center became recognized as one of the premier, full-service transplant facilities in the United States.

Frist is an emeritus trustee of Princeton, having served as a young trustee in the four years after he graduated and then later for 10 years as a charter trustee. He is an avid marathon runner, having run seven marathons in the past decade, has his commercial and instrument ratings as a pilot, and has written five books and more than 100 articles, chapters and abstracts on medical research. Each year he performs surgery during medical mission trips to developing countries.