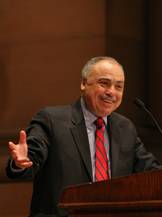 Africare President Julius Coles, a 1966 graduate alumnus, received the James Madison Medal at Alumni Day and, along with Woodrow Wilson Award winner Paul Sarbanes, emphasized the need for people to engage in public service. The Madison Medal is presented each year to a graduate alumnus or alumna who has had a distinguished career, advanced the cause of graduate education or achieved an outstanding record of public service. 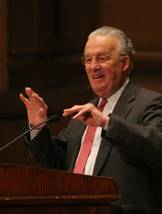 Former U.S. Sen. Paul Sarbanes, a member of Princeton's class of 1954, received the Woodrow Wilson Award, which is bestowed annually upon an undergraduate alumnus or alumna whose career embodies the call to duty in Wilson’s famous speech, "Princeton in the Nation’s Service."

Below left: Walter Massey, president of Morehouse College, asked a question following Coles' address. Coles earned his B.A. from Morehouse before coming to Princeton to complete his MPA in the Woodrow Wilson School.

Sarbanes and Coles also joined Princeton scholars in a panel discussion exploring the global response to the genocide and humanitarian crisis in the Darfur region of Sudan. The panel featured unscheduled comments from former U.S. Senate majority leader and Princeton alumnus Bill Frist, who was in Darfur just days earlier.

Sarbanes, a member of Princeton's class of 1954, received the Woodrow Wilson Award, which is bestowed annually upon an undergraduate alumnus or alumna whose career embodies the call to duty in Wilson’s famous speech, "Princeton in the Nation’s Service."

Julius Coles, a 1966 graduate alumnus, was awarded the James Madison Medal. The award is presented each year by the University to an alumnus or alumna of the Graduate School who has had a distinguished career, advanced the cause of graduate education or achieved an outstanding record of public service.

Both Sarbanes and Coles are graduates of the Woodrow Wilson School of Public and International Affairs. After each delivered an address in the morning at Richardson Auditorium, they received their awards at the Alumni Day luncheon, at which the University also recognized the winners of its highest student honors.

In his address, Sarbanes reflected on his 40-year career as an elected official and urged his fellow alumni to engage in service on all levels. Sarbanes' career began with election to the Maryland House of Delegates in 1966, followed by three terms in the U.S. House of Representatives and five terms in the U.S. Senate -- making him the longest-serving senator in Maryland's history.

"My four marvelous years here at Princeton reinforced and informed the principles of public service that I had learned at home, in school and in the community," Sarbanes said. He also cited the influence of Benjamin Franklin, who served the United States in its infancy in capacities ranging from international diplomat to the founder of Philadelphia's fire department, lending library and hospital.

"Franklin considered personal advancement inseparable from civic engagement," Sarbanes said. "He always said that he would rather have people remember him as someone who lived usefully than someone who died rich."

"In our vigorous civil society with its democratic institutions and governance, the possibilities of public service are many and varied, and by no means limited to elected office. … Communities all across the country depend on the school superintendents, the principals, the teachers, the law enforcement officials, the firefighters, the public servants of all descriptions," he said. 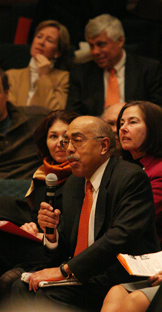 Coles had a 28-year career with the U.S. Agency for International Development before assuming the leadership of Africare in 2002. In his address, he discussed a range of challenges facing Africa, including growing economic disparities, HIV/AIDS, malaria, malnourishment, political corruption and rising debts. But he also pointed to positive trends, such as an increasing number of democracies and a demographic shift that will lead to Africa having one of the world's youngest populations by 2050, potentially creating a talent pool that will fuel investment in Africa by the global business community.

Like Sarbanes, Coles stressed the value of service at all levels, noting that Africare -- a leading nonprofit organization specializing in aid to Africa -- was founded on the belief that "we can best work together in partnership with African communities at the grassroots level. We believe that our approach is to place communities at the center of development."

Coles also called for greater emphasis on educating future leaders in America's schools who can tackle the problems of an increasingly interdependent world.

"A lot of people out there are worried about us. Are we responsible leaders of the global community? I think we need to listen to that sometimes because we are considered to be very arrogant and not knowledgeable about the world and its problems," Coles said. "Whether that criticism is fair or not, I think it's one we have to take into account. … We have to change that perception. We are people who are just, people who are loving and care about the world and want to make the world a better place. We still need to work at it."

In the afternoon panel discussion, Sarbanes and Coles were joined by Wilson School faculty members Jennifer Widner and Gary Bass for a discussion titled "Never Again? The Crisis in Darfur." Coles and Widner offered historical perspectives on the crisis, while Sarbanes and Bass provided views on intervention options.

The panel members and moderator Anne-Marie Slaughter, dean of the Wilson School, also called for comments from Frist, a member of Princeton's class of 1974 and former senator from Tennessee. Frist, a physician, was attending Alumni Day days after returning from Darfur, where he provided medical care to refugees.

Sarbanes said that an agreement to have U.N. forces support African Union troops who are already deployed in the region "would be a major step forward." But in discussing America's role in this international peacekeeping situation, he added, "There is a desperate need for the United States to get its fiscal situation in order so that we then have the resources with which to undertake some of these responsibilities."

Bass told the audience that the topic was particularly timely for Alumni Day "so you have a sense for what's being talked about on campus. Darfur is a huge issue for Princeton students. It is something that occupies an enormous amount of campus activism, campus thought and campus debate."

In his remarks to close the panel, Frist addressed both students and alumni in urging greater engagement on the Darfur issue. "The 'Save Darfur' shirts that you have on now -- that whole campaign around America has an impact. … The American people do need to stand up, whether it's through divestment or whether it is through the campaigns that are going on, or through contributions, or through documentaries. It does make a real difference."

Letter to the editor of the Washington Times