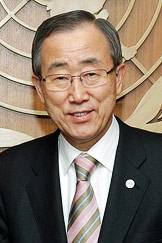 United Nations Secretary-General Ban Ki-moon will deliver the opening keynote address for the 2009 Princeton Colloquium on Public and International Affairs at 9:30 a.m. Friday, April 17, in the McCarter Theatre Center's Matthews Theatre on the Princeton University campus. The title of Ban's speech is "The Imperative for a New Multilateralism."

The colloquium, titled "Prosperity or Peril? The Next Phase of Globalization," is hosted by the Woodrow Wilson School of Public and International Affairs on Friday and Saturday, April 17-18. It will examine whether and how the increasingly interconnected forces of globalization will result in a more stable and prosperous global society, or instead enable instability and violence to spread more easily across borders. Featured speakers include: Paul Krugman, professor of economics and international affairs at Princeton and winner of 2008 Nobel Prize in economics; Tadataka Yamada, president of the Bill and Melinda Gates Foundation's Global Health Program; and Eric Schmidt, chairman and CEO of Google Inc. and a 1976 Princeton graduate.

Ban was elected as the eighth U.N. secretary-general in 2006. At the time of his election, he was minister of foreign affairs and trade for the Republic of Korea (South Korea). His three decades as a diplomat have included postings in New Delhi, Washington, D.C., and Vienna, and responsibility for a variety of portfolios, including foreign policy adviser to South Korea's president, chief national security adviser to the president, deputy minister for policy planning and director-general of American affairs.

The secretary-general's talk at Princeton is free and open to the public. No tickets are required. Doors will open at 9 a.m. for general admission seating. No cameras, backpacks or umbrellas will be allowed into the venue, and all attendees will be asked to bring a photo ID in the event that security measures require it. Because of security considerations, the audience must be seated by 9:15, so attendees are encouraged to arrive early.

As parking for the McCarter Theatre Center is extremely limited, the Woodrow Wilson School will provide shuttle bus service from Lot 21 near Jadwin Gymnasium to McCarter starting at 8 a.m. (Buses will leave from the FitzRandolph Road side of the parking lot).

More information about the 2009 Princeton Colloquium and a detailed schedule of events are available online.

Directions to campus also are available online, as is an interactive campus map (for a view of Lot 21).

Members of the news media wishing to attend the secretary-general's address should e-mail the University's Office of Communications at commpro@princeton.edu NO LATER THAN noon Wednesday, April 15.