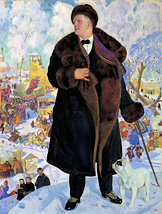 "Portrait of Fyodor Chaliapin," a 1922 oil on canvas by Boris Kustodiev, is part of the exhibition, “Mir Iskusstva: Russia’s Age of Elegance,” on view at the University Art Museum through June 11.

Below left: Kustodiev's 1917 oil on canvas, "Fair Booths," also is included in the exhibition.

Artists of the Mir Iskusstva ("World of Art") movement, which thrived in Russia around the turn of the 20th century, are represented in the exhibition "Mir Iskusstva: Russia's Age of Elegance," on view at the University Art Museum through June 11.

Drawn from the holdings of the State Russian Museum in St. Petersburg, the works in the exhibition were long suppressed because this last flowering of Russian imperial culture did not conform to the artistic philosophy of the Soviet government. The exhibition is the first opportunity for people in America to see this material, which is now being re-evaluated by the Russians.

In contrast to the later doctrines of Socialist Realism imposed by the Soviet government, it was the motto "art for art's sake" that united the Mir Iskusstva artists, who sought to create a Russian art parallel to that of Western Europe. Loosely grouped under the leadership of the editor of the periodical Mir Iskusstva and the future ballet impresario Sergei Diaghilev, the movement's artists valued decorative arts and theatrical design as much as painting, sculpture and architecture. The colorful works seen in art exhibitions and the ballets Diaghilev brought to Paris beginning in 1909 became a revelation to tastemakers and artists of the avant-garde in Western European art.

The exhibition includes more than 80 objects in a wide range of media -- paintings, sculpture, prints and drawings, book and stage designs, and ceramics. Organized by the Foundation for International Arts and Education in Bethesda, Md., the exhibition is presented in conjunction with the State Russian Museum and is supported by an indemnity from the Federal Council on the Arts and the Humanities. 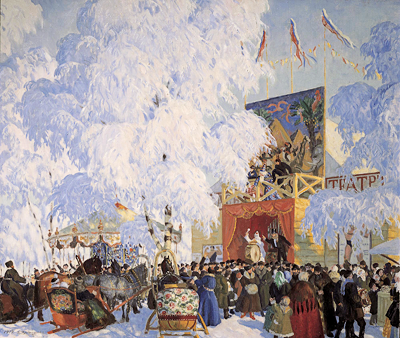 This exhibition has special ties to the University as it was initiated by two members of the class of 1962: Greg Guroff, president of the Foundation for International Arts and Education; and Tony Evnin, a supporter of the foundation. Evnin has a particular interest in the art of this period because his mother, Nina Schick, studied with one of the Mir Iskusstva movement's premier painters, Sergei Sudeikin; Schick's portrait by her teacher is included in the exhibition.

The exhibition has inspired a number of collaborative events throughout the University and community. Princeton faculty members Ellen Chances of the Department of Slavic Languages and Literatures and Simon Morrison of the Department of Music contributed essays to the catalog and will participate in public programs accompanying the exhibition. The Program in Theater and Dance presented "L'Après-midi d'un Faune" by Russian choreographer Vaslav Nijinsky in February as part of its Spring Dance Festival.

"We are delighted to be the only East Coast venue for the Mir Iskusstva exhibition," said Susan Taylor, director of the University Art Museum. "It provides a remarkable opportunity for our audiences to experience the extraordinary cultural achievements of this movement and an unprecedented occasion for the Princeton museum and its University and community colleagues to collaborate on the many dimensions -- historical, cultural, artistic and literary -- that illuminate this richly complex period."

For more information on the exhibition and related events, visit the art museum Web site.