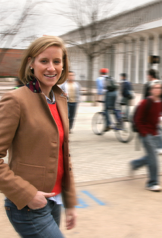 A survey of her peers provided Woodrow Wilson School major Amy Sennett with valuable data for her senior thesis on career and family plans after graduation.

Concerned with how young professionals — especially women — often struggle to balance work and family life, Amy Sennett has used her senior thesis to assess the expectations of her classmates as they prepare for lives after Princeton.

A major in the Woodrow Wilson School of Public and International Affairs, Sennett conducted a survey of the entire senior class to collect data about career and family plans. She found that achieving work-life balance is a widespread concern among her fellow students — although less so among men than women.

Sennett said she chose her topic for several reasons, in particular because of what she has heard from classmates. For example, during discussions about gender equality in the class “Ethics and Public Policy” last spring, she was surprised to learn how little her peers seemed to think they could change the status quo. “The women didn’t really think that they had choices or that they could make changes or find other ways to combine career and parenting,” she said. “And the men in particular did not see a problem.”

Such classroom debates — and Sennett’s own curiosity — were fueled further by recent prominent articles in the press about the reported trend of well-educated women who opt out of careers for motherhood. As a result, she wanted to gauge the relevance of these arguments among Princeton’s graduating class. “I could not pass up on a topic about which I felt so passionately, both intellectually and personally,” she said.

Also, Sennett’s own family circumstances enriched the topic for her. She is the eldest of three children, and her mother, who manages a law firm in Milwaukee, has been working outside the home since Sennett was 6 months old.

“All of these factors got me to asking, ‘So what are my classmates thinking?’” she said. She knew that the best way to find out was to conduct a survey of the senior class.

Before drafting the survey, Sennett made “a fortuitous discovery” while doing research at Mudd Library. She came across a senior thesis by Barbara Zipperman, a member of the class of 1975, who also had conducted a survey of her peers about career and family plans of male and female undergraduates. With these findings, Sennett decided to survey 1975 alumni for comparison purposes, thereby expanding and deepening the scope of her own project.

For the class of 2006, which had a 49 percent response rate to her electronic survey, Sennett found that most students understood issues of work-life balance to be important, if not currently pressing. “A lot of the women felt realistic about what the challenges would be, and saw childrearing as their primary responsibility,” she said, noting that there was no indication that they would explicitly opt to leave the workplace permanently for the domestic setting.

She did find a significant difference between the responses of women and men. Her data show that 62 percent of women and only 33 percent of men foresaw a conflict between career and family plans. In dealing with this conflict, 57 percent of women said they would work part time in order to raise children, in contrast to 13 percent of men. Women also seemed intent on having a career early and building a resume before leaving for childcare and then returning to work later on. For men, this was not an issue.

Sennett said her survey registered “an ideal of equality and a perception of shared parenting” in the men’s responses, but she acknowledged feeling “disheartened” by some of the data. “I was surprised by the number of men — 46 percent — who automatically said they would expect their wife to interrupt her career,” she said. “It’s assumed that this is an issue that women have to face, but not men.”

In her survey of the class of 1975, which had 208 respondents, Sennett observed that there was a general recognition that juggling family and career was a source of conflict and had proved “more difficult” than the seniors responding to Zipperman’s survey in 1975 had thought it would be. Yet she noted an overriding message that these alumni found fulfillment in both areas, and the low number of full-time homemakers among the women showed that careers were viewed as long-term pursuits.

Nannerl Keohane, Sennett’s thesis adviser, said she is “delighted that Amy is working on this topic, which is of considerable importance to all of us.”

She added that Sennett’s thesis already has garnered great interest. “Throughout the year, as I have described the project to Princeton alumnae I have met, as well as people on other campuses, they have uniformly been intrigued by what she is doing and very interested in hearing about her findings,” said Keohane, the Laurance S. Rockefeller Distinguished Visiting Professor of Public Affairs and the University Center for Human Values.

Sennett said she benefited greatly from the guidance of Keohane, pointing to her background in feminist theory and the fact that “she has dealt with this on so many levels during her professional career, especially as president of Wellesley and Duke.”

“Professor Keohane’s been a fantastic adviser also in the sense of bringing my thesis to the attention of other faculty members and other Princetonians, and she is extremely encouraging,” she said. “And for someone who has so much on her plate, she has read all my drafts down to the split infinitives.”

Among the many “incredible moments” she has had working on her thesis, Sennett emphasizes how meaningful it has been to focus on a Princeton-related topic, which has enabled her to connect with numerous Princeton people and resources. For example, in order to learn how to create a survey, she worked with Ed Freeland and Eric Riddles at the Princeton Survey Research Center; economist Barbara Morgan at the Woodrow Wilson School helped her analyze data; and the Alumni Association and the secretary for the class of 1975 put her into contact with alumni. Also, she communicated with Zipperman about her 1975 survey as well as journalists and academics who have written about work-life issues.

A student columnist at the Princeton Alumni Weekly, Sennett will share her research with the larger Princeton community when she writes about it for an issue this summer.

Gearing up for her own future, Sennett will be teaching at the Foreign Affairs University in Beijing next year through the Princeton in Asia program. Ultimately, she expects to go into public policy and work for the government. But she’s not ready yet to part with her senior project. “I feel I could work on this topic forever,” she said. “I’m so happy I chose it.”