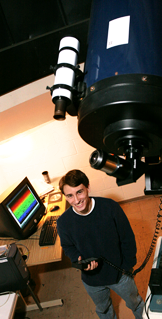 Pictured here in Peyton Hall, James Wray has operated another telescope in New Mexico to observe moons of Jupiter and Saturn for his senior thesis project.

While Princeton students get help from their advisers on planning their senior project, James Wray has known the essence of what he wanted to study since he became old enough to look at the sky and wonder if anyone was looking back.

“Life elsewhere in the cosmos is probably something everyone thinks about at one time or another when they’re a kid, but I’m one of those kids who never stopped,” said Wray, who is set to finish his degree in astrophysics later this spring. “After years of working toward it, I’ve finally got the chance to work with other astronomers on a project that could help us find it.”

Wray has spent the last several months using a telescope in New Mexico to observe two of our solar system’s faraway moons, Jupiter’s Europa and Saturn’s Enceladus, which have tantalized astronomers for years. Both moons possess quantities of water and possible geologic activity, hinting that the conditions necessary for life could exist there as well.

“It’s possible that beneath the surfaces of these two distant moons, cold as they may be, there may be liquid water, possibly kept fluid by a heat source underground,” Wray said. “The Cassini probe, now in orbit around Saturn, has actually seen strange plumes erupting from beneath the surface of Enceladus, which could mean the moon has a warm center. So looking at these plumes could offer us a clue as to whether conditions that could support life are there somewhere.”

One problem confronting Wray was his relative inexperience, which can affect a scientist’s ability to reserve time on sophisticated telescopes.

“There are generally not many opportunities for an undergraduate to get involved in planetary research, as missions like Cassini have teams made up of scientists who have devoted years and sometimes decades to working on projects,” said Wray’s faculty adviser Ed Turner, a professor of astrophysical sciences. “So James and I looked around for something he could do from the ground.”

Turner, who shares Wray’s interest in planetary science, found an instrument that enabled Wray to make observations that elude even Cassini: the high-resolution Echelle spectrograph at the Apache Point Observatory. The instrument, though located in New Mexico, can be controlled from a remote location via the Internet. Spectrographs permit astronomers to determine the composition of a distant object by examining the light that reflects from it, the spectrum of which carries the telltale signature of the different chemicals in its makeup.

With the right resolution and perspective, the instruments can be used to explore other aspects of celestial bodies. While Cassini has analyzed the composition of the Enceladus plumes, only a spectrograph as powerful as the one at Apache Point can monitor the plumes over extended time periods, an advantage for Wray’s study.

“Big spectrographs are too heavy to mount on space probes like Cassini,” he said. “A low-resolution spectrograph on a probe might be able to determine the plumes’ makeup, but we’d also like to know how these plumes behave over time, perhaps determining details such as their ejection velocity over the surface. So in this case, it’s actually better to be part of the ground-based search.”

Though the device is one of the best of its kind in the world, Wray said working with it remotely from the Princeton campus exposed him to some of the facts of daily life he will face as a professional astronomer.

“I’ve spent nine evenings looking at both Europa and Enceladus, trying to get useful images of both,” Wray said. “It takes a long time to gather enough light from such distant objects to get the information we need. A spectrum of Europa requires a five-minute exposure, and one of tiny Enceladus, which is only about 500 kilometers in diameter, demands an hour.”

Wray said his data will require a few more weeks of analysis before he can form any conclusions, but that the project will have been useful regardless of the outcome.

“Even if we observe nothing of interest, we’ve demonstrated that it’s better to use space probes, and that we need to send more of them up there,” Wray said. “However, if we do see something, we’ll have shown that ground-based telescopes can still be useful for planetary science.”

Of course, he said, he hopes the project will be seen as one step in a longer, more profound effort.

“Finding life anywhere in the universe, whether on these moons or someplace else, would bring such a change to our perception and philosophy that it’s easy for me to dedicate my own life to the search,” said Wray, who is planning to attend graduate school at Cornell University. “If you think of the astonishing diversity of life here on our planet, then imagine what might be possible with biological structures built from something other than cells and DNA — well, the potential is astonishing. That’s why I’ve leaned toward observation rather than theory in my work. If it happens in my lifetime, I want to be part of the team that makes the discovery.”