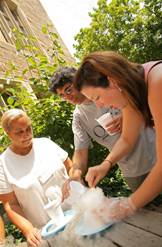 During a session of the Summer Institute in Environmental Science, a professional development program for New Jersey teachers, Princeton chemist Andrew Bocarsly (center) showed participants how to make ice cream by mixing liquid nitrogren with half-and-half and powdered sugar. Here Bocarsly is joined by Carla Millner (left) of Joyce Kilmer Elementary School in Trenton and Beth Glenn of Bordentown Middle School in Bordentown. The experiment was part of a series of lessons combining elements of chemistry, neuroscience, physiology and environmental science.

Below left: Participants in the summer institute conducted experiments to measure the dew point in different environments as part of a session on weather and climate. Here Lucy Jacobson (left), a 2006 Princeton graduate who is preparing to become a high school physics teacher, assists Dana Holton, a teacher at B.C. Gregory Elementary School in Trenton, in testing the moisture of air inside a McDonnell Hall classroom by measuring the temperature at which condensation formed on a glass container.

The recent heat wave in Princeton provided a perfect backdrop for a summer program dedicated to helping New Jersey teachers broaden their knowledge about the environment and other science topics.

Finding a shady spot in the courtyard outside Fine Hall on a hot afternoon, a group of elementary school teachers huddled over a collection of glass containers, ice cubes and thermometers, calculating the level of moisture in the air. A few blocks away, outside Frick Hall, several middle school teachers cooled off with homemade ice cream -- mixed with liquid nitrogen -- as part of a lesson on the body's chemistry.

These lessons were part of the Summer Institute in Environmental Science, sponsored by the Princeton Environmental Institute (PEI) along with several University partners. Some 50 teachers from 15 New Jersey school districts participated in the July 10-21 program, which exposed them to the latest scientific research to benefit their efforts in the classroom.

"Some of the teachers come back year after year, some are new to the program, and they have a wide range of experience," said Anne Catena, outreach coordinator for PEI. "We present the content at an adult level and try to model good, inquiry-based experimental pedagogy."

The program's sessions, which focused on the topics of "Weather and Climate," "Chemistry and Your Senses" and "The Global Ocean," were led by faculty from the University and local teachers, assisted by current Princeton students and recent graduates.

Steve Carson, a former scientist at the Princeton Geophysical Fluid Dynamics Laboratory who now teaches at John Witherspoon Middle School in Princeton, directed the sessions on weather and climate. He said that because the participating teachers have varying levels of experience and teach different subjects, the goal was to present a broad base of scientific topics and techniques.

Carson led his group through an experiment in which they paired off outside Fine Hall, adding ice cubes to glass containers to gauge the dew point -- the temperature at which condensation formed on the outside of the containers. They compared the results to earlier dew point measurements inside an air-conditioned McDonnell Hall classroom to illustrate the different levels of moisture in the air in the two environments. 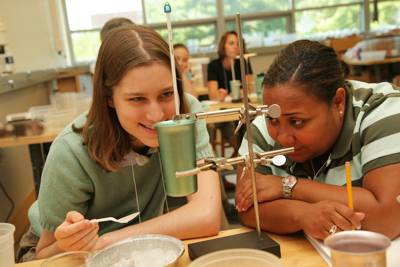 Dana Holton, who just completed her first year as a teacher at B.C. Gregory Elementary School in Trenton, said learning more about the dew point and humidity was one of several lessons that provided valuable insights into issues related to environment and global warming.

"In terms of global warming -- why we're so concerned, why we need to conserve -- that's a big idea that we want to get across to our students," Holton said.

In the session outside Frick Hall, Princeton chemistry professor Andrew Bocarsly found a refreshing experiment for his group of middle school teachers as part of his lessons on the five senses.

On this day, the group had discussed the chemistry behind taste. "Given the fact that it was after lunch and we have this beautiful weather, the obvious thing to do would be to do some chemistry and make liquid nitrogen ice cream," Bocarsly said.

The teachers combined half-and-half with powdered sugar in Styrofoam coffee cups, then added liquid nitrogen to the mix, which sent plumes of frost spilling over the edges. After a couple of minutes of vigorous stirring, the mixture froze and became an edible treat.

Bocarsly said the experiment not only fit the lesson on taste, but led naturally into a discussion about the sense of touch -- all part of a broader exploration of chemistry, neuroscience, physiology and environmental science that focused on how the body's nerves operate and how they react to various environmental stimuli.

"These sorts of activities are sufficiently general that the teachers are finding they could incorporate the activity in some other teaching experience for their students," Bocarsly said. "For example, we've looked at ions and how they interact with nerves -- we've talked about it in terms of the nervous system, but other teachers who deal with electricity and conductivity said they could use that lab for that purpose. It's a very general set of ideas that we're handing them."

Al Jackson, who teaches earth, physical and life science to sixth-graders at Wilbur Watts Intermediate School in Burlington City, said, "I don't teach chemistry at this level, so some of the information has been pretty heavy for me. But the follow-up with the activities puts it right into perspective to help me understand it and to help me focus on that point for my students -- that as I go over content, I have to make sure I have ways to put it into perspective for them, whether it be a hands-on project or a game."

Jackson, who has participated in summer professional development programs at Princeton for several years, said, "I get some of the world's leading scientists in their fields here at Princeton, so that's always a bonus. When I talk to students and tell them this is what I did at this workshop at Princeton, it helps my credibility."

The Summer Institute in Environmental Science is affiliated with QUEST, a professional development program for elementary and middle school teachers that is run by Princeton's Program in Teacher Preparation. The institute also is supported by the University's Cooperative Institute for Climate Science, Center for Environmental Bioinorganic Chemistry and Center for Biocomplexity.