Princeton University's QUEST Summer Institute provides New Jersey school teachers with opportunities for hands-on laboratory experiments and fieldwork to enhance their knowledge in science and mathematics and to give them teaching ideas to bring back to their classrooms. From left, Trenton elementary school teachers Steve Stallone and Kathryn Graf make s'mores using a solar-powered oven at the Princeton Plasma Physics Laboratory during the "Energy in the 21st Century" session.

Carol Hill has been attending classes at Princeton University on and off since 1989. But she isn't a student.

Hill, who teaches fourth grade at Grant School in Trenton, is one of the approximately 1,300 teachers from schools across New Jersey who have come to Princeton University over the past 25 years to learn new and better ways to teach science through the QUEST Summer Institute.

"I love this program," Hill said. "The University and the faculty treat us as professionals, and because of this program I go back to my class more psyched to teach than ever. I learn something new every time I come here." 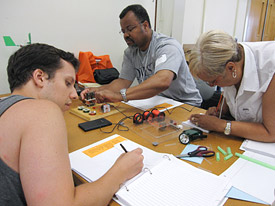 J.D. Walters (left) and Al Jackson, both of Burlington City, work along with Carla Milner of Trenton on an electrical circuit during a session at the plasma physics lab. (Photo by Barbara Todd)

QUEST, which stands for Questioning Underlies Effective Science Teaching, is designed to enhance elementary, middle and high school teachers' knowledge of science and mathematics through hands-on laboratory experiments and field experiences, and to acquaint them with specific ideas and activities to use in their classrooms.

"We want to support those elementary teachers whose background might not be in science. We also want to further their discovery of inquiry-based instruction, which takes teachers beyond 'cookbook' experiments and tries to get students to drive the desire for knowledge," said Anne Catena, director of professional development initiatives in Princeton's Program in Teacher Preparation, which oversees QUEST. 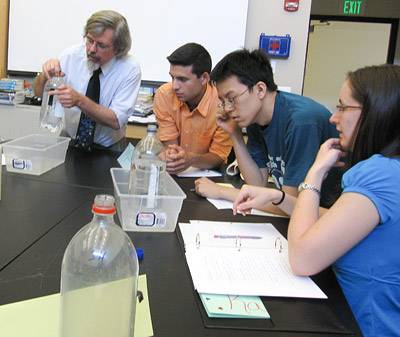 Steve Carson (left) of John Witherspoon Middle School in Princeton leads an experiment on water and air pressure that has applications in many areas, including weather and climate. Carson instructs QUEST participants (from left) Matt DiDonato, a rising Princeton senior who will be a high school student teacher this fall, and Princeton alumni Jeffrey King of Camden County Technical Schools in Pennsauken and Kaitlyn Golden of the Academy for Independent Studies in North Bergen. (Photo by Barbara Todd)

The program, which this year ran from July 5-15, is taught by Princeton faculty and staff, as well as scientists from neighboring institutions. This summer's sessions included topics such as "RxeSEARCH," "Energy in the 21st Century" and "Life and Chemistry in the Ocean." Among other activities, institute participants performed experiments in labs and outdoors using solar and wind power at the Princeton Plasma Physics Laboratory and collected water samples from Lake Carnegie.

Hill said the QUEST program helps her meet the challenge of sharing her passion for teaching science with her students, many of whom are not native English speakers. "Through this program, it never gets stale, and it makes me want to be a better teacher," she said.

Catena noted that, for teachers, one of the attractions of the program is that it has constantly evolved since its first sessions were held in 1986. The amount of time spent on math to complement the science has ebbed and flowed over the years based on feedback from teachers' school districts. The program's length also has varied -- lasting anywhere from one to four weeks.

"We've changed focus based on district needs," said Catena. "We've obtained more funding through research grants, and we're trying to take the burden off the districts."

Catena said the program also has changed in its use of technology to connect the teachers with Princeton's faculty and scientists. 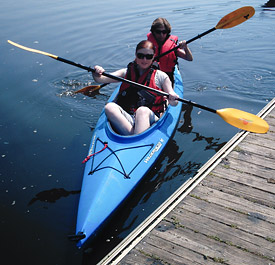 Amy Pfeffer (front), a teacher at Johnson Park Elementary School in Princeton, and Joanne Koellner, a Lawrence Intermediate School teacher, return to the dock after getting water samples on Lake Carnegie. (Photo by Greg Peters)

For example, Michael Bender, a Princeton professor of geosciences, whose research focuses on atmospheric and oceanic sciences, was included in the QUEST program via Skype from South Africa.

Hill, who has been a teacher for more than 30 years, also said she loves meeting other teachers who come through the program, from the experienced teachers such as herself to the young, new teachers such as Matt DiDonato.

DiDonato, a member of the Princeton class of 2012, is majoring in astrophysical sciences and pursuing a certificate in teacher preparation. He will spend the fall semester as a student teacher in high school physics in South Brunswick. His senior thesis focuses on creating a curriculum using astronomy to teach physics.

"This program, with its inquiry-based instruction, is perfect for helping with my idea to use things that the students are already interested in -- the stars, space -- to make learning physics not super scary," he said.

For DiDonato, QUEST has an added benefit: Learning from the teachers and faculty who have been there before him.

"Being in this program, I realize how important the education I got at Princeton and the education I'm getting here are," he said. "Going into my first full year of teaching, I didn't know what to expect, but the people here, along with the program, are helping me realize that I do know how to make this stuff accessible to my students." 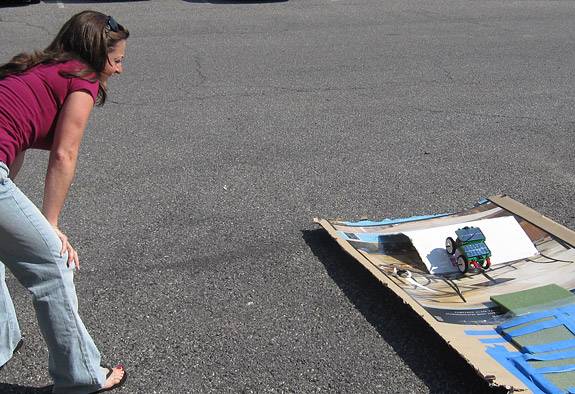 Michelle McKenney of Hillsborough Middle School watches her solar-powered car travel over a track set up at the Princeton Plasma Physics Laboratory. (Photo by Barbara Todd)