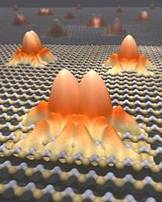 Spintronics at the atomic level. Substitution of magnetic atoms (manganese) into a semiconductor (gallium arsenide) creates the material for future electronics. Spins of the magnetic atoms interact via a cloud of electrons, which can be visualized using a scanning tunneling microscope. The image is a composite of microscopic visualization of electron cloud together with a model of the gallium arsenide crystal structure.

In a stride that could hasten the development of computer chips that both calculate and store data, a team of Princeton scientists has turned semiconductors into magnets by the precise placement of metal atoms within a material from which chips are made.

The effort marks the first time that scientists have achieved this degree of control over the atomic-level structure of a semiconductor, a goal that has eluded researchers for many years. The team used this unique capability to make a semiconductor magnetic, one atom at a time. Team leader Ali Yazdani said that manipulating semiconductors could eventually revolutionize computers by exploiting not just the flow of electrons but also their quantum property, called spin, for computation.

"Using the tip of a scanning tunneling microscope, we can take out a single atom from the base material and replace it with a single metal that gives the semiconductor its magnetic properties," said Yazdani, a Princeton professor of physics. "The ability to tailor semiconductors on the atomic scale is the holy grail of electronics, and this method may be the approach that is needed."

The team, which also includes scientists from the University of Illinois at Urbana-Champaign and the University of Iowa as well as Princeton, will publish their results as the cover article of the July 27 issue of the scientific journal, Nature.

By incorporating manganese atoms into the gallium arsenide semiconductor, the team has created an atomic-scale laboratory that can reveal what researchers have sought for decades: the precise interactions among atoms and electrons in chip material. The team used their new technique to find the optimal arrangements for manganese atoms that can enhance the magnetic properties of gallium arsenide. Implementation of their findings within the chip manufacturing process could result in a major advance in the use of both the magnetic "spin" as well as electric charge for computation.

"Chips might take on many new capabilities once such 'spintronic' technology is perfected," Yazdani said. "One thing we might be able to do is make chips that can both manipulate data and store it as well, which right now generally requires two separate parts of a computer working together."

Computers use two different kinds of technology to calculate results and store data. While semiconductor chips -- often based on silicon or more advanced materials such as gallium arsenide -- do the calculating, data storage has generally been accomplished with magnetic materials within floppy disks or reels of tape. Combining these functions into a single device could reduce the size and energy requirements of computer hardware, a perennial goal of the industry.

Although gallium arsenide "doped" with manganese has been a promising candidate material for such dual-function chips for a decade, working with the material has proven frustrating for a number of reasons. One difficulty is that researchers have not been able to engineer the material with optimal magnetic properties.

"Up until now, we have not had a way to control how the manganese sits in the gallium arsenide substrate," Yazdani said. "We could not specify, for example, how large the bits of manganese would be, or how far apart they would be located. And because we couldn't study how changing these variables affected the semiconductor's performance, it was hard to know what its ideal specifications should be. For the most part, we had to just crystallize the material -- with the dopant arranged more or less randomly -- and hope."

Dale Kitchen, a reasearcher in Yazdani's lab and first author of the Nature paper, hit upon a solution while working with a high-tech tool used to explore complex materials called a scanning tunneling microscope, which operates very differently than a desktop optical microscope. The device has a finely-pointed electrical probe that passes over a surface in order to detect variations with a weak electric field. The team, however, found that the charged tip could also be used to eject a single gallium atom from the surface, replacing it with one of manganese that was waiting nearby.

"The important thing technically was that we could incorporate the manganese into the underlying crystal lattice," Yazdani said. "If you want to study how the semiconductor functions, it would not have been enough merely to deposit the manganese on the surface. They needed to become a single integrated material."

Using their new technique, the team was able to find the precise arrangements of manganese atoms that exhibited magnetic properties, the important factor in developing spin-based electronics. The experimental data agreed with theoretical work that had been performed by Michael Flatté and his group at the University of Iowa, which had anticipated the atomic arrangement that optimized magnetism in the experiments.

Yazdani cautioned that his team's technique would not translate immediately into new chip technology but would benefit fundamental research by providing a testbed for exploring magnetism in other semiconductors.

"We can now ask questions about these magnetic atoms and get answers," he said. "How does it affect the semiconductors' performance when you change their orientation, for example, or their distance from one another? Answers to these questions may allow us to link the electric current and magnetic spin within these new semiconductors, and that's a goal the field has been seeking for many years."

This research was funded in part by the National Science Foundation and the U.S. Army Research Office.

The discovery of ferromagnetism in Mn doped GaAs1 has ignited interest in the development of semiconductor technologies based on electron spin and has led to several proof-of-concept spintronic devices2-4. A major hurdle for realistic applications of Ga1-xMnxAs, or other dilute magnetic semiconductors, remains
their below room-temperature ferromagnetic transition temperature. Enhancing ferromagnetism in semiconductors requires understanding the mechanisms for interaction between magnetic dopants, such as Mn, and identifying the circumstances in which ferromagnetic interactions are maximized5. Here we report
the use of a novel atom-by-atom substitution technique with the scanning tunnelling microscope (STM) to perform the first controlled atomic scale study of the interactions between isolated Mn acceptors mediated by the electronic states of GaAs. High-resolution STM measurements are used to visualize the GaAs
electronic states that participate in the Mn-Mn interaction and to quantify the interaction strengths as a function of relative position and orientation. Our experimental findings, which can be explained using tight-binding model calculations, reveal a strong dependence of ferromagnetic interaction on crystallographic orientation. This anisotropic interaction can potentially be exploited by growing oriented Ga1-xMnxAs structures to enhance the ferromagnetic
transition temperature beyond that achieved in randomly doped samples. Our experimental methods also provide a realistic approach to create precise arrangements of single spins as coupled quantum bits for memory or information processing purposes.