Nobel awarded to leaders of the COBE science team 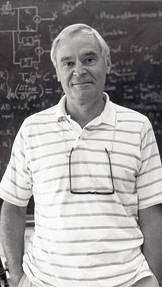 This year's Nobel Prize in physics was awarded today to John Mather and George Smoot, two leaders of the Cosmic Microwave Background Explorer (COBE) satellite science team. David Wilkinson of Princeton's physics department, who died in 2002, was one of COBE's originators and one of the key scientists who guided the project through several scientific discoveries that are now cornerstones of physical cosmology.

Mather, of NASA's Goddard Space Flight Center, and Smoot, of the Lawrence Berkeley National Laboratory, were awarded the Nobel Prize in physics for research that supports the "big bang" model of the universe's formation. Their findings were based on measurements done with the COBE satellite.

In 1974 Wilkinson was one of a group of scientists who conceived COBE to study properties of the fossil radiation emanating from the edge of the observable universe. The satellite was launched in 1989, and in 1990 the science team announced its observations on the temperature of the afterglow of the big bang. Most view the measurement as incontrovertible evidence for the big bang theory of the universe.

The team reported the discovery of the anisotropy, or spatial variations, in this fossil radiation in 1992. These ripples offer a picture of the early universe that shows how the galaxies came into being.

In 2001, NASA launched a second satellite, the Wilkinson Microwave Anisotropy Probe, which in 2003 confirmed with high precision the COBE anisotropy measurements. The probe was posthumously named after Wilkinson, its originator.

The COBE team also received the Peter Gruber Foundation's Cosmology Prize this August. The Gruber prize, which recognizes contributions to fundamental advances in the field of cosmology, was presented at the International Astronomical Union meeting in Prague. Wilkinson's widow, Eunice Wilkinson, represented him at the ceremony.

Wilkinson joined the Princeton faculty in 1963 and soon thereafter began his work on the fossil radiation. He transferred to emeritus status in 2002, shortly before dying of cancer at age 67.

"Dave was a pioneer in experimental cosmology and a dedicated teacher," said Dan Marlow, chair of Princeton's physics department. "The techniques he developed for measuring both the absolute temperature and anisotropy of the cosmic background radiation, and the students he taught, have had an enormous impact on cosmology."