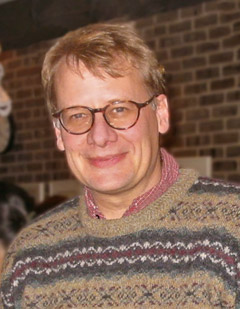 Two Princeton University scientists have been recognized with a major international prize for their central role in a satellite experiment that has contributed to breakthroughs in better understanding the shape, makeup and age of the universe.

Astrophysicists Lyman Page and David Spergel were named May 27 as winners of the Shaw Prize for their pioneering work on the Wilkinson Microwave Anisotropy Probe, the NASA satellite known as WMAP. They will share the $1 million award with their longtime collaborator, Charles Bennett of Johns Hopkins University.

"Astronomy is a science by which (humans) go beyond the limits of themselves to face the enormous universe," said Lin Ma, a member of the selection committee, in announcing the award in Hong Kong. The prize, funded by Hong Kong film producer and philanthropist Run Run Shaw, honors exceptional contributions to "the advancement of civilization and the well-being of humankind," according to a statement by the Hong Kong-based Shaw Prize Foundation. 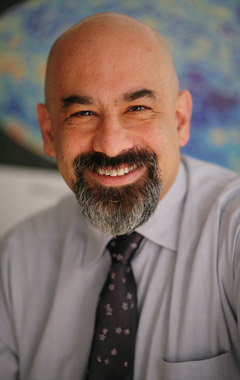 Page, the Henry DeWolf Smyth Professor of Physics, and Spergel, the Charles A. Young Professor of Astronomy on the Class of 1897 Foundation, were recognized, along with Bennett, a professor of physics and astronomy, "for their leadership of the Wilkinson Microwave Anisotropy Probe (WMAP) experiment, which has enabled precise determinations of the fundamental cosmological parameters, including the geometry, age and composition of the universe."

Page and Spergel said the award honors the work of the WMAP team and a group of Princeton contributors, including the late physicists Robert Dicke and David Wilkinson, and Norm Jarosik, a senior research physicist. The experimental program to measure the cosmic microwave background radiation -- the remnants of the Big Bang -- began at the University more than a decade ago.

Wilkinson "set the satellite project in motion and was a mentor to many team members, myself included," Page said. "It was my good fortune to be in the right place at the right time to get in on the ground floor. It was especially fun to work with Norm Jarosik and Dave early in the design phase, and then with David Spergel and other WMAP colleagues when the analysis began."

Spergel said, "I feel very fortunate to have worked with a superb team of scientists on WMAP which includes not only my exceptional colleagues, Norm Jarosik here and Gary Hinshaw at NASA's Goddard Space Flight Center, but also a number of superb postdocs and graduate students who worked with me on the analysis and interpretation of the data."

WMAP, set to continue operating through the end of August, is one of the most advanced measuring devices ever created for studying the remnant hiss from the Big Bang creation of the universe. NASA launched the sun-orbiting probe in 2001, and it was renamed in 2002 after the death of Wilkinson, who had shepherded the satellite to its launch.

Among their many insights, scientists interpreting WMAP's reams of data have determined that the age of the universe is 13.7 billion years; that dark energy dominates the composition of the universe, representing 72 percent of all matter; and that the shape of the universe is Euclidian, meaning that it corresponds to the triangles commonly studied in high-school math class. The researchers also have been able to conclude that the universe is larger than previously thought -- WMAP's data showed it is at least 90 billion light-years wide.

Scientists are working on their final analyses of WMAP. They also are looking forward to viewing upcoming results from the European Space Agency's space observatory, Planck, a scientific successor to WMAP. William Jones, an assistant professor of physics at Princeton, will play a significant role in that project. As an undergraduate in the class of 1998, Jones worked with Lyman Page on the WMAP optics.

The Shaw Prizes were first awarded in 2004. Princeton cosmologist James Peebles and mathematician Andrew Wiles have previously received the awards, in 2004 and 2005 respectively. The new Shaw laureates will receive their awards in Hong Kong in a ceremony on Sept. 28.

In addition to astronomy, the Shaw Prize committee also awarded achievements in two other categories: life science/medicine and mathematical sciences.

Jean Bourgain, a professor at the nearby Institute for Advanced Study in Princeton, was chosen for the mathematical sciences prize for his "profound work in mathematical analysis and its application to partial differential equations, mathematical physics, combinatorics, number theory, ergodic theory and theoretical computer science."

David Julius, a professor of physiology at the University of California-San Francisco, was awarded the life science/medicine prize for his discoveries of the molecular mechanisms by which the skin senses painful stimuli and temperature and produces pain hypersensitivity.