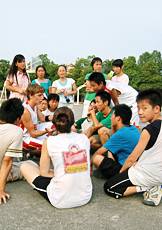 Senior Rory Truex (left) started an English immersion program in China last summer along with 10 other Princeton undergraduates. Here, he and sophomore Betty Cox (back to camera) met with their class during a program-wide basketball tournament. Extracurricular activities complemented the classroom instruction, and students participated in everything from athletic tournaments to sessions on poetry, rock music and theater.

Above left: The Princeton students organized extracurricular activities to promote cultural exchange as well as language skills, including helping the Chinese students with their own literary magazine.

Below left: Junior Francine Saunders (right) found the teaching experience so rewarding that she is considering a career in education.

This past summer, Truex and 10 other Princeton undergraduates spent nine weeks running an English immersion course for 150 college students in Jishou, China. The program, called Summer of Service, was founded by Truex and now will be offered annually through Princeton in Asia, which has been supporting educational and other service-related programs in Asia for Princeton students and alumni for more than a century.

Truex, a senior who is majoring in politics with a focus on Sino-American relations, conceived of the program out of his own experiences and interests. He began studying Chinese as a freshman, and at the end of his first year at Princeton enrolled in Princeton in Beijing, an intensive language training program in Beijing for eight weeks over the summer.

After the course, Truex said he was “sold on the idea” of language immersion programs. He revisited China in the summer of 2005 as a Princeton in Asia intern, working with a nonprofit to teach English to students in rural western China, far from the bustle of the big cities to the east. It was to this region that he returned with his own group of fellow Princeton students — now in the role of teachers — this past summer.

“The Summer of Service was the most rewarding thing I have ever done,” said Truex. “It’s so easy to do so much good in that part of the country.” He added, “I think the program was the right way to do international service, and it gave all of us a chance to reflect on the experience while we were involved in it.”

Setting up the program was a significant accomplishment for Truex, who pulled together a cross-generational group of sponsors to provide full financial backing, as well as other kinds of institutional support. Along with Princeton in Asia, support came from various individual alumni and alumni groups, particularly the classes of 1948 and 1969; the Pace Center; the Princeton Institute for International and Regional Studies; the Princeton Prospect Foundation; several eating clubs; and the Office of the Vice President for Campus Life.

Also vital to coordinating the support on the ground was Princeton in Asia partner and 1994 graduate alumna Kate Zhou, a professor at the University of Hawaii and founder of the Education Advancement Fund International. She connected Truex to the college in Jishou and communicated the vision for the program to administrators in China.

Participating in the Summer of Service were students from a variety of class years with diverse academic interests, such as international affairs, physics, classics, ecology and evolutionary biology, music and computer science. Out of 40 applicants, Princeton in Asia selected students who could offer a range of viewpoints and talents. Four of the students could speak some Chinese.

Present throughout the program was Leslie Medema, program director at Princeton in Asia, who served as a liaison with local administrators and as a professional mentor to the Princeton students. “My presence allowed Rory to focus on the students, curriculum and the Summer of Service teachers to maximize what they all could gain during the summer,” she said.

The Princeton students established their language school at Normal College of Jishou University, which is a teachers college whose student body is made up predominantly of two minority groups, the Miao and the Tujia.

While the Chinese students already had studied English for 10 years, they had scant opportunity to practice what they’d learned. Under the tutelage of the Princeton students, they spent up to 12 hours a day speaking and writing English in both formal and informal settings.

For the classroom instruction, the Chinese students were divided into smaller groups overseen by individual Princeton students. The lessons featured lectures, vocabulary and grammar drills and, every afternoon, one-on-one conversations for 30 minutes at a time.

To aid their teaching, the Princeton students created a textbook, called “A Worldly Perspective,” in collaboration with translators at Jishou. The textbook includes 28 lesson plans and stresses conversation-focused activities and discussion topics related to American culture. One lesson is on cultural misunderstandings, which revolves around an excerpt from “The Joy Luck Club” by Amy Tan; another is on college academic life, which includes a letter from a Princeton student to his uncle about deciding what major to choose; and still another discusses lesser-known sports in the United States through a dialogue about how to play lacrosse.

Saunders, now in her third year at Princeton, found the teaching experience so rewarding that she is considering a career in education. She said it was particularly satisfying to help students “gain self-confidence” and “knowledge of the world” through such varied endeavors as “singing, rapping, acting, writing and photography.” 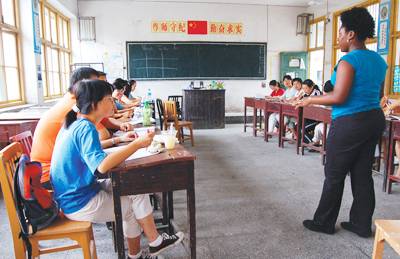 Truex said that the lessons were intended to promote cultural exchange as well as language skills, and that this was also the goal of the many extracurricular activities. Since the Princeton students were housed in apartments at the college and the Chinese students were in nearby dormitories, conversations and group activities continued well beyond classroom hours. Shared meals, basketball games, a play-acting group and a “school of rock” for music enthusiasts all became part of the experience. Chinese students even founded a literary magazine, aptly naming it “Summer Heaven: Dreaming in English.”

The Princeton students also extended their teaching beyond the college students by providing training sessions to local English teachers, affording them the chance to speak English and to discuss different teaching techniques.

Interacting on so many levels with their Chinese peers was immeasurably rewarding for the Princeton students. While Truex said everyone had bouts of homesickness and culture shock, the awareness they gained about another culture and the sense of accomplishment were so transforming that several students hope to return to China next summer.

Cox, who is planning to participate again, said, “I believe that the Summer of Service showed both the students and the teachers that genuine, personal relationships can bridge divides of culture and language.”

For Cox, the program also is informing her own academic goals. This semester, she is taking Chinese and a Chinese history course, and is considering East Asian studies as a concentration.

The experience in China also is helping Truex think about his senior thesis, which will examine the power of the individual in international relations and explore the ways individuals perceive other countries.

Also high on his agenda for the year is ensuring that the Summer of Service continues successfully this coming summer. Truex is working closely with Princeton in Asia to select future program leaders and plan for the long-term success of the program.

But Truex is not content to stop there. He is eager to use his know-how and energy to establish other summer initiatives elsewhere in the world. “I would like to incubate a couple of new programs,” he said, “so that Princeton students have even more options for international summers of service.”