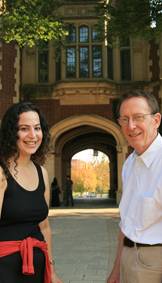 Father and daughter Gilbert and Elizabeth Harman share a passion for philosophy — and now also share status as faculty members at Princeton. Elizabeth came on board this summer, joining Gilbert, who has been on the faculty since 1963, in the Department of Philosophy’s home in 1879 Hall.

As a child, Elizabeth Harman played in the hallways of 1879 Hall, home of the philosophy department, and wandered through the crowds gathered for receptions in the hall’s fabled Tower Room. These days when she strides through the building, it is as one of the department’s newest faculty members.

She is the daughter of Gilbert Harman, who has been a philosophy professor at Princeton since 1963 — before Elizabeth was born. Visiting her father at work was a fun diversion as a child. Now her office is one floor up from his. The Harmans are believed to be the first father-daughter team on the faculty.

“I used to hang out in the department a lot,” Elizabeth said. “It seemed very big to me.”

The girl who once tagged along with her father when he gave lectures out of town is now making her mark in the field of ethics as an assistant professor with a joint appointment in philosophy and the University Center for Human Values. And Gilbert Harman, who for nearly 45 years has been one of the most prominent philosophers in the country, couldn’t be prouder.

During her childhood, Elizabeth and her father often discussed philosophical quandaries, but Gilbert never presented the conversations as academic exercises. When she was 6, Gilbert asked her whether she thought a red car in a dark garage was still red, even though it didn’t appear red.

“We had talked about philosophy questions my whole life, really, and I think my father just told me puzzles that he thought would interest me,” she said. “He never made it intimidating or said, ‘Now we will discuss some philosophy.’ He would say, ‘What do you think of this?’”

His daughter disagreed with him often, which Gilbert liked. “In philosophy that’s good,” he said. “That’s the way I talk with my colleagues. We never agree.”

Gilbert’s other daughter, Olivia, also grew up with an interest in philosophy. She was a philosophy major in college before deciding to study English at Washington University in St. Louis, where she currently is earning her Ph.D. His wife, Lucy, is a psychotherapist in private practice in Princeton.

Elizabeth planned to be a math major at Harvard, but when she enrolled in a philosophy course and loved it, she decided to embrace her father’s field.

Joining her father’s department means she has become colleagues with professors who once patted her on the head at faculty parties. Paul Benacerraf, the James McDonnell Distinguished University Professor of Philosophy, has lived two doors down from the Harmans for several decades; his children once babysat for her. Professor of philosophy John Burgess has known Elizabeth since she was in preschool. Philosophy runs in Burgess’ family too — his son Alexis is a postgraduate student in Princeton’s philosophy department and is teaching several junior seminars this year.

Elizabeth earned her Ph.D. from the Massachusetts Institute of Technology, where she wrote her dissertation on the ethics of abortion and the question of what things have moral status. She was an assistant professor at New York University from 2003 until 2006.

Peter Singer, the Ira Decamp Professor of Bioethics in the University Center for Human Values, said he is delighted to have Elizabeth at the center, where she will be teaching a course in bioethics next year. She is a Laurance Rockefeller Visiting Fellow there this year.

“I think she has some interesting ideas on some of the trickiest problems in bioethics,” such as what our obligations are when we bring beings into existence, which play out in debates about abortion and human embryo research, he said. “Liz has a different approach to that, which in a way is quite remarkable when you think about the extent to which this has been discussed in the last 30 years in philosophy and by the public. She has published a couple of outstanding articles in the field.”

Her paper “Creation Ethics: The Moral Status of Early Fetuses and the Ethics of Abortion,” which appeared in Philosophy and Public Affairs in 1999, when she was a graduate student, garnered attention for challenging the assumption that all fetuses at the same stage of development have the same moral status. She argued that a fetus that will become a person has moral status, while one that will be aborted does not have moral status.

Gilbert Harman, the Stuart Professor of Philosophy, is known for his work in a number of areas in philosophy, including the philosophy of language, the theory of knowledge, ethics and cognitive science. His versatility is legendary.

Thomas Kelly, an assistant philosophy professor, said Gilbert “has made significant contributions to more or less every area of contemporary philosophy over the course of his career.”

“He’s always working and always thinking,” Benacerraf said. “You never know what the next thing that will strike his imagination will be.”

Harman’s book, “Reasoning, Meaning and Mind,” published in 1999, is “a very rich collection of influential essays,” said Benacerraf. Other well-known works of his include “Thought,” “Explaining Value and Other Essays in Moral Philosophy” and “Moral Relativism and Moral Objectivity,” written with Judith Jarvis Thomson.

In 2005 he was awarded the Jean-Nicod Prize, given to a leading philosopher whose work has advanced the field of cognitive science. Harman has long approached philosophical issues with a keen interest in their interaction with other academic fields. He co-teaches a course in epistemology and learning theory with professor of electrical engineering Sanjeev Kulkarni, and another on the philosophy and psychology of rationality with Philip Johnson-Laird and Eldar Shafir, professors of psychology.

Adam Elga, an assistant professor of philosophy, selected Gilbert as his thesis adviser when he was a Princeton undergraduate. Elga particularly admires — and tries to emulate — Gilbert’s approach to working with students.

“When I was a student, I would give him this long, thought-out question, and then there would be a long pause and he would say, ‘Maybe,’” Elga recalled. “I was always expecting him to give me the answers, and he was unwilling to do that. He forces students to tackle questions on their own at first.”

“They both have a real commitment to plain-talking, no-nonsense philosophy,” Elga said. “They’re direct, they keep things simple and they ask tough questions. As a result they both write extremely persuasive stuff.”

The Harmans’ skills of persuasion have at times gone head to head, such as when Gilbert was recruiting graduate students for Princeton and Elizabeth was recruiting them for MIT.

“One year she stole all the women in the class!” Gilbert said. “She got them all to go to MIT.”

“There was a rivalry,” Elizabeth agreed. “I used to admit that Princeton would be a good place, though.”

Now they’ll be playing for the same team.

Workshop for graduate students in philosophy focuses on mentoring women