Gilbert Harman, the James S. McDonnell Distinguished University Professor of Philosophy, Emeritus, died at his home in Princeton on Nov. 13 after a long illness with Alzheimer’s. He was 83.

Harman worked in virtually every area of analytic philosophy — philosophy of language and linguistics, philosophy of mind and cognitive science, epistemology, ethics and moral psychology — and made major contributions to each.

He joined Princeton in 1963 and transferred to emeritus status in 2017 — a 54-year tenure that makes him one of the longest-serving faculty members in the University’s history. 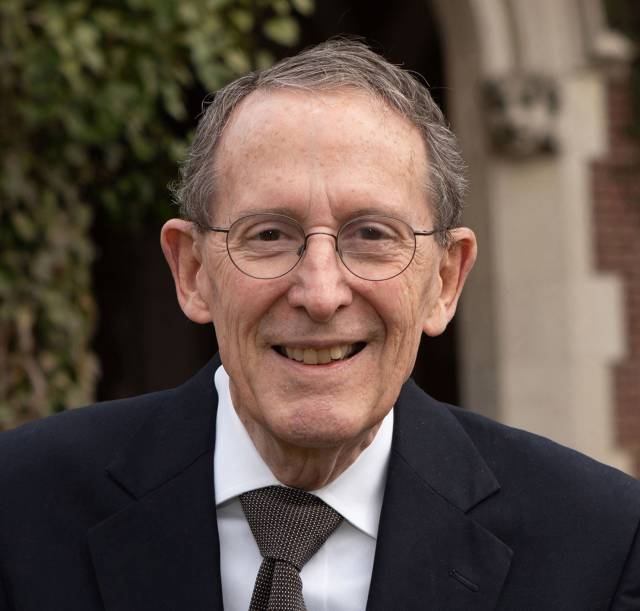 “Gil Harman was a towering figure in American philosophy and a defining figure in philosophy at Princeton,” said Gideon Rosen, the Stuart Professor of Philosophy and department chair. “His contributions to epistemology, the philosophy of mind, and moral philosophy continue to shape the fields he worked in. He was a maverick, not a system-builder, and he changed his views constantly — even gleefully — often in response to developments in linguistics and cognitive science.”

Rosen continued: “This approach to philosophy was liberating for generations of students, who learned from Gil that a serious philosopher can approach philosophy in a provisional, experimental spirit. He exuded curiosity, intellectual intensity and good will. He was a champion of younger philosophers at Princeton and around the world; his support and encouragement, especially for philosophers with ideas outside the mainstream, were an important force for intellectual diversity in philosophy and a culture of open-mindedness. He also served as an example of that rare thing: a brilliant philosopher who lived a wonderful life outside philosophy. His family — his wife, Lucy, and his children, Elizabeth and Olivia — were a constant humanizing presence in the department.  He loved music — jazz; he read novels and poetry and talked about them, making it vivid to students and colleagues that one can be an intensely engaged philosopher and a human being at the same time.”

Harman was born in 1938 and grew up in a family of five outside Philadelphia. He received his bachelor’s from Swarthmore College in 1960 and his Ph.D. from Harvard University in 1964, writing a dissertation under the supervision of W.V.O. Quine — one of the most influential philosophers of the 20th century.

His elder daughter, Elizabeth Harman, the Laurance S. Rockefeller Professor of Philosophy and the University Center for Human Values, joined the Princeton faculty in 2006. As a child, she played in the hallways of 1879 Hall, home of the philosophy department, and wandered through the crowds gathered for receptions in the hall’s fabled Tower Room.

“When I was growing up, my dad often talked to me about philosophical topics and puzzles, but he never said, ‘Let’s do some philosophy now.’ He just talked to me about questions he thought I would find interesting. In a deep way he communicated to me that I was allowed — indeed that I was supposed to — think about things for myself. These conversations taught me to trust my own take on things, and not to be afraid to say that I didn’t understand something or that I wasn’t convinced.”

She also remembers her father’s directness, often served with a soupçon of humor. “He didn’t miss an occasion to advocate for what he thought mattered,” she said. “In 2009, he received Princeton’s Howard T. Behrman Award for Distinguished Achievement in the Humanities and thus he found himself giving an acceptance speech at the award dinner with the University President, provost and dean of the faculty as captive audience. My dad’s remarks started normally enough, but before long he said, ‘The title of my speech is: 'We need a linguistics department.’”

Princeton’s Program in Linguistics has been growing robustly in recent years, with steady increases in its independent concentrators, courses and annual enrollments. Adam Elga, professor of philosophy and a 1996 alumnus, is the current program director.

“As a college senior I once asked Gil what it was like being a philosophy professor,” said Elga. “He replied with a twinkle in his eye: ‘It is great — almost as great as being a philosophy student!’ Perhaps this helps explain why Gil's thinking was so vibrant, why his views were always subject to change, and why he continued to explore new fields with a fresh eye. Having been his student, his senior thesis advisee, and for 16 years his colleague in the department, I admire Gil most because — despite his
great achievements — he never gave up the joy of being a student.”

Michael Smith, the McCosh Professor of Philosophy, joined Princeton in 1985 and already knew of Harman’s seminal work in philosophy of language, philosophy of mind and action, and moral philosophy.

“I was in awe of him,” said Smith. “However, within a few weeks [of my arrival] he had invited me, my wife and toddler son to a lunch and to a dinner party at his home. He couldn’t have been more welcoming or, I soon discovered, more amusing, especially about himself. The latter was important, as it meant that people loved him in part because of, not despite, his being such a mischief-maker and contrarian.”

“Gil had a powerful mind, and it made him one of the most formidable critics in the profession: If there was a weakness in your argument, he would find it,” said Thomas Nagel, who taught at Princeton from 1966 to 1980 and is a University Professor Emeritus at New York University. “But he didn't think arguments were the main thing in philosophy. He prized difficult questions and intuitive insight, and was always supportive of original and unorthodox ideas.”

Ernest Lepore, Board of Governors Professor at Rutgers University, worked closely with Harman beginning in the late 1990s. Together they taught several courses, organized events at Princeton to celebrate leading philosophers Quine and Donald Davidson (who taught at Princeton from 1967 to 1970), ran a National Endowment for the Humanities summer school at Princeton and edited a collection of essays on Quine for Oxford University Press.

“It was easy to see how Gil became Princeton’s utility philosopher, directing dissertations on virtually any subject from epistemology to metaphysics to philosophy of language to philosophy of mind to cognitive science to ethics and so on,” said Lepore, who is co-teaching the graduate seminar “The Linguistics and Philosophy of Pejorative Language” at Princeton this fall with Una Stojnić, assistant professor of philosophy. “He was not just brilliant and productive and influential but also a good human being. There is no higher praise.”

Harman is the author of “Thought,” widely considered a classic of epistemology; “The Nature of Morality”; “Change in View,” about how rational people change their minds; “Reasoning, Meaning, and Mind”; “Explaining Value and Other Essays in Moral Philosophy”; and “Moral Relativism and Moral Objectivity,” written with Judith Jarvis Thomson. With Donald Davidson, he co-edited “Semantics of Natural Language,” a collection of seminal papers in the field that gave rise to the modern philosophy of language.

Harman’s other publications, writing and teaching all have served to build bridges between philosophy and the cognitive sciences at Princeton and beyond, and to convince philosophers of the importance of cognitive science for understanding reasoning and the mind. Harman was co-director with George Miller, the James S. McDonnell Distinguished University Professor of Psychology, Emeritus (who died in 2012), of the Princeton University Cognitive Science Laboratory from 1985 to 1995 and chair of the Program in Cognitive Studies from 1991 to1998.

In 2005 he was awarded the Jean-Nicod Prize, given to a leading philosopher whose work has advanced the field of cognitive science. In addition to being elected to the American Academy of Arts and Sciences, Harman was named a fellow of the Cognitive Science Society and the Association for Psychological Science.

Harman also approached philosophical issues with a keen interest in their interaction with other academic fields. As part of his teaching in cognitive science, he co-taught a course in epistemology and learning theory with Sanjeev Kulkarni, the William R. Kenan, Jr., Professor of Electrical Engineering. He and Kulkarni co-authored two books: “Reliable Reasoning: Induction and Statistical Learning Theory” and “An Elementary Introduction to Statistical Learning Theory.” Harman co-taught a course on the philosophy and psychology of rationality with Philip Johnson-Laird, the Stuart Professor of Psychology, Emeritus, and Eldar Shafir, the Class of 1987 Professor in Behavioral Science and Public Policy and professor of psychology and public affairs, as well as other courses cross-listed with the University Center for Human Values, the Program in Linguistics and more.

His popularity as a dissertation adviser led to his having supervised one in every seven of the graduate students in philosophy while he taught at Princeton, many of whom have gone on to teach philosophy at major universities. In 2013, the department brought back several of these students and Harman’s former colleagues to campus for a conference to celebrate his 50 years of teaching at Princeton.

Many of his graduate students recall Harman’s integrity and kindness, which shaped their experience at Princeton and long after, as they pursued professional paths.

“Gil had a very distinctive approach to advising, which I'm sure all of his students will recognize,” said Joshua Knobe, a 2006 graduate alumnus and professor of philosophy, linguistics and psychology at Yale University. “I remember once having a conversation with him in which I was trying to defend a specific view about some technical question in the philosophy of mind. Gil was going after it with objection after objection, and at some point, it was becoming clear that my attempt to defend this view was completely falling apart. At that point, I said, 'But Gil, this view I'm trying to defend — it is actually your own view! It is the view that you yourself have defended in a whole series of articles.' Harman looked at me quizzically and then brushed aside this point, saying 'That's just some other guy.'”

Knobe continued: “Basically, Harman did everything he could to make you feel like you weren't really the student of that monumental figure, that the monumental figure was just 'some other guy' whose papers you could read if you wanted to but who had nothing to do with what you should be doing in your work as his grad student.”

“Gil was famous for his work in mind, metaethics, language, and epistemology, but he knew and did many, many things,” said James Dreier, a 1989 graduate alumnus and the Judy C. Lewent and Mark L. Shapiro Professor of Philosophy at Brown University. “To pick just one: in 1977 he had a dispute with Umberto Eco in the journal Quarterly Review of Film Studies, over the question of whether there can be a semiotics of film!” In 1975, Harman and Eco were among the speakers at a conference on the role of film studies in colleges and universities held at City College of New York.

"As an adviser, Gil was straightforward with his students without being critical or judgmental,” said Angela Mendelovici, a 2010 graduate alumna and associate professor in the Department of Philosophy at Western University in London, Ontario. "He was helpful, open-minded and good-natured. He had strong opinions about philosophy, which he shared freely but never imposed on others. When students disagreed with his views, he would smile and make a quip about how progress in philosophy consists in overturning the work of your adviser."

Harman remains a deep influence on her. "He was also an intellectual giant, and I still find myself engaging with his work in my research and teaching,” Mendelovici said. “But he never took himself too seriously. He showed me how to care more about people than any institutions you represent, and this model of integrity is probably what will stay with me the most.”

View or share comments on a blog intended to honor Harman’s life and legacy.