A revolutionary celebration marks 250 years of Princeton in Princeton 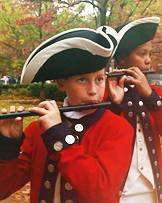 Members of the Old Barracks Fife and Drum Corps from Trenton entertained those attending Revolutionary Princeton Day on campus Oct. 27. The event was part of a celebration this fall marking the 250th anniversary of the University moving to Princeton.

At left: John Witherspoon -- the only college president to sign the Declaration of Independence -- discussed Revolutionary times with visitors at his house. 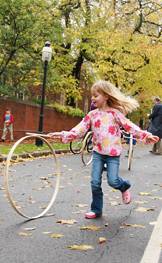 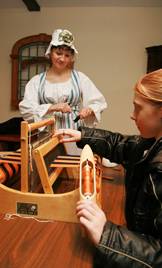 Historical interpretations and re-enactments gave visitors an idea of what life was like in the 1700s. Textile designer Janie Woodbridge (left) showed Sanne Baltussen how to operate a table loom. 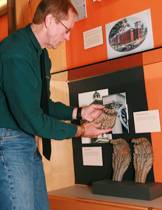 A Princetoniana exhibit on the history of Nassau Hall is on display through Nov. 30 on the 100 level of the Frist Campus Center. Exhibit curator Richard Smith, program secretary in the Department of Ecology and Evolutionary Biology, holds one of several cast iron capital pieces from the columns on Nassau Hall's cupola discovered during renovations in 2006. The cupola with its decorative columns was part of the design implemented by architect John Notman following the disastrous fire of 1855, in which Nassau Hall was nearly gutted. The capital pieces were probably "attic stock," purchased at the time of construction and then stored for use in future repairs.

The Rev. John Witherspoon, president of the College of New Jersey, held court in the President's House, while a fife and drum corps played a rousing tune outside.

Visitors to Princeton University on Oct. 27 were transported back to the 1700s during Revolutionary Princeton Day. The event was part of a celebration that began Oct. 21 marking the 250th anniversary of the University moving to Princeton.

Chartered in 1746 as the College of New Jersey, Princeton was located in Elizabeth for one year and then in Newark for nine years. In 1756, the College moved to a 4 1⁄2-acre site in Princeton, N.J. The campus' first buildings were Nassau Hall and the President's House (now Maclean House), which remain today. 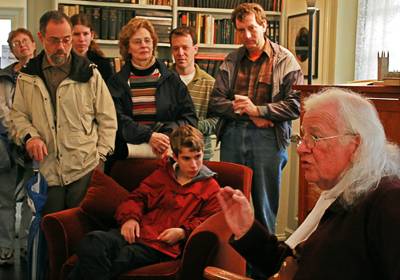 Twenty-one years later, the University witnessed a turning point in the American Revolutionary War when British troops sought refuge in Nassau Hall after suffering defeats on the Princeton Battlefield.

In addition to visiting with John Witherspoon -- the only college president to sign the Declaration of Independence -- and listening to the Old Barracks Fife and Drum Corps from Trenton, families attending Revolutionary Princeton Day toured major historic sites around campus; played colonial games; explored a life-sized maze; learned about silver smithing and weaving; heard a doctor discuss medical treatments of the period; and took in a historical re-enactment of Patrick Henry's "Give Me Liberty or Give Me Death" speech.

"Revolutionary Princeton Day" was one of several events the University organized in cooperation with community groups to celebrate its heritage and its enduring relationship with Princeton neighbors.

Remaining events include a Halloween parade at 5:15 p.m. Monday, Oct. 30, starting at the Princeton Public Library Plaza and led by the Princeton University Band.

A lecture series exploring the evolution of the University and the region continues at 7:30 p.m. Wednesday, Nov. 1, at the Nassau Inn with an address, "New Jersey: Storm Center of the American Revolution," by John Murrin, professor emeritus of history. It concludes at 4:30 p.m. Thursday, Nov. 2, in the Murray-Dodge Hall West Room with a talk on "Princeton's Revivalist Roots From a 21st-century Religious Perspective" by Thomas Breidenthal, dean of religious life and the chapel.

Nassau Hall and Maclean House will be included in the 2006 Historical House Tour presented by the Historical Society of Princeton from 10 a.m. to 4 p.m. Saturday, Nov. 4. Tickets are required for this event; call (609) 921-6748 for more information.

Princeton students and other members of the campus and local communities are invited to join in a "step sing" at 9 p.m. Thursday, Nov. 9, in front of Nassau Hall. The event, featuring traditional University music, is being planned by the University Glee Club and the University Band.

A Princetoniana exhibit at the Frist Campus Center reflecting on the history of Nassau Hall is on display through Nov. 30.

To view a full schedule of anniversary events, visit the Office of Community and Regional Affairs Web site, or call the office at (609) 258-5144.