John M. Murrin, Princeton professor of history, emeritus, a scholar of American colonial and revolutionary history and the early republic, died May 2 at Robert Wood Johnson University Hospital in Hamilton, New Jersey, of complications from COVID-19. He was 84.

Over his career, Murrin published more than 50 essays that ranged widely across the Atlantic and Anglophone early modern world from the 17th through the 19th centuries, examining social, religious, political and legal history. 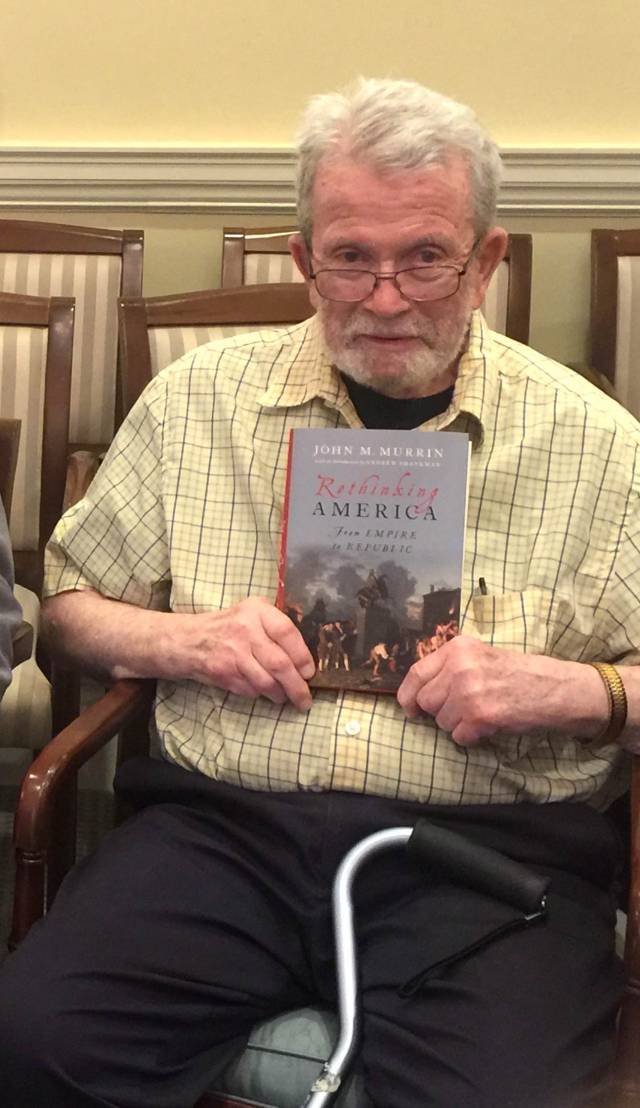 “John Murrin was the most ingenious early American historian of his time, or any other time,” said Sean Wilentz, the George Henry Davis 1886 Professor of American History and professor of history. “His preferred form was the essay, pieces which he rendered as intellectual inventions, taking big conventional ideas — about colonial society before the Revolution, say, or about the framing of the Constitution — and forcing you to think about them as you never had before.”

Murrin is co-author of the textbook “Liberty, Equality and Power: A History of the American People” (1980) and author of an essay collection, “Rethinking America: From Empire to Republic” (2018). He edited and co-edited several books including “Colonial America: Essays in Politics and Social Development” (1983) and “Saints and Revolutionaries” (1984).

“Among his many fine qualities, John was known for his wide-ranging knowledge about a great many fields of history well beyond his expertise in early North American colonial history and the early national period,” said Keith Wailoo, the Henry Putnam University Professor of History and Public Affairs and chair of the history department. “He was also renowned for producing a remarkable group of Ph.D. students in the field, for his enthusiastic support of the history softball team, and for just being a wonderful person.”

Murrin joined Princeton’s faculty in 1973 and transferred to emeritus status in 2003.

Born August 20, 1935, in Minneapolis, Murrin earned a B.A. from the College of St. Thomas, an A.M. from the University of Notre Dame and a Ph.D. from Yale University.

He taught at Washington University in St. Louis from 1963 to 1973 before coming to Princeton in 1973, where he remained until his retirement.

“His command of the literature — seemingly, any literature — would have been daunting if it weren’t paired with an open-heartedness and generosity that allowed even the rawest grad student (like me) to begin to gain confidence,” said Alec Dun, assistant dean of the college, who earned his Ph.D. in history under Murrin’s supervision. “He embodied a delightedness in the study of the past — a puckish glee at delving into the people and dynamics of other times and places, and in relating amazingly erudite and complex arguments about them.”

Andrew Shankman, a professor of history at Rutgers University-Camden, who also studied with Murrin and wrote the introduction to “Rethinking America,” said Murrin was “an extraordinary scholar, teacher, mentor and adviser whose enduring significance and impact is clearest in his over 50 published essays, a form that he mastered and to which he was devoted.”

“He is remembered for his wit, humor, generosity, kindness, and particularly for his wide-ranging enthusiasm and excitement about the truly diverse scholarship of the early Americas,” Shankman added.

Among his colleagues and mentees, Murrin is remembered fondly for his love of baseball, his perfect recall of decades-old stats, and for founding the departmental softball team with William Jordan, the Dayton-Stockton Professor of History.

“He was the co-founder and for years the pitcher and reliable RBI producer for the Princeton history department’s two summer league slow-pitch softball teams: The Revolting Masses and the Machiavellian Moment (the enemy of my enemy is my teammate),” Shankman said.

Murrin served as chair of the coordinating committee and as a member of both the editorial committee and the advisory committee for "The Papers of Thomas Jefferson," a project preparing the authoritative and comprehensive edition of the correspondence and papers of the third president of the United States.

He also was an expert in Princeton University history, editing the final two volumes of “Princetonians: A Biographical Dictionary,” which documents the lives of 1,032 students known to have attended the College of New Jersey in the classes of 1748 through 1794.

View or share comments on a blog intended to honor Murrin’s life and legacy.