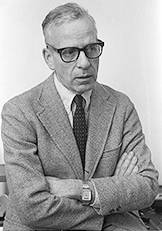 Kenneth Levy, the Scheide Professor of Music History Emeritus, died of complications of Parkinson's disease on Aug. 15 at his home in Skillman, N.J. He was 86.

A scholar of medieval and Renaissance music as well as the history of music, Levy was among the world's authorities on early Christian and Byzantine music. His research interests ranged from 13th-century European polyphony to 16th-century French chanson, among other areas.

During his nearly half-century career as a teacher and a scholar, Levy's deep knowledge of music history reached a wide range of students — from non-music majors who took his perennially popular "Introduction to Music" (Music 103) class to musicology doctoral candidates.

Steven Mackey, chair of the Department of Music, said he was fortunate to have had Levy as a colleague for 10 years and "marveled" during that time at the various roles Levy played with the students.

"He was a demanding but generous mentor, leading his graduate students through the esoteric catacombs of early Christian music," Mackey said. "At the same time he was a very popular teacher of Music 103, sharing his joy of music with hundreds of spring-semester seniors. He was an authoritative scholar and a gentle soul."

Born in New York City in 1927, Levy served in World War II and earned his bachelor's degree from Queens College in 1947. He earned his MFA at Princeton in 1949. After a year studying at the Sorbonne on a Fulbright fellowship, he returned to Princeton to complete his Ph.D. in 1955 and was awarded a Guggenheim fellowship that same year.

After 12 years as a faculty member of Brandeis University, he joined the faculty of Princeton in 1966, serving as chair of the music department from 1967 to 1970 and again in 1988, the same year in which he assumed the Scheide professorship.

Scott Burnham, the current Scheide Professor of Music History, called Levy "a legend in the department: among the grad students because of his unfailing expertise and succinct wit; and among the undergrads because of his lively and entertaining music appreciation lectures."

Peter Jeffery, who earned his Ph.D. in music history at Princeton in 1980, was a preceptor in Levy's Music 103 course. "Ken was one of Princeton's great teachers," said Jeffery, who went on to join the Princeton faculty in 1993. "During the decades Ken taught here, one quarter of all undergraduates took his Music 103, and an entire generation of professors learned to teach as preceptors in that course."

At the time Jeffery was a doctoral candidate, the musicology study area was located on the C-floor in Firestone Library, three stories underground. "Ken was proud of the fact that there were no windows to provide distraction," said Jeffery, the Michael P. Grace Chair in Medieval Studies and Professor of Music at the University of Notre Dame. "'I hope you don't like sunlight,' he said, when I met him for the first time as a new graduate student."

Levy taught a wide range of music history courses at Princeton including "The Symphony from Haydn to Stravinsky," "The Middle Ages and Early Renaissance" and "Introduction to Music of the Romantic Era" at the undergraduate level, and "Medieval Musical Style" and "Notation and Problems in Early Christian Music" at the graduate level.

Burnham noted that Levy made an equally remarkable impression outside the classroom. "Ken was a terrific colleague who spoke rarely but always with great effect," Burnham said. "When I first got to Princeton, I noticed at faculty meetings that all my senior musicology colleagues would look over at Ken whenever anything important was on the table, waiting for the definitive word."

Levy published widely throughout his career, including numerous articles in scholarly journals — most recently on Byzantine and Western liturgical chant — and musical encyclopedias. Based on his Music 103 lectures, he wrote the textbook "Music: A Listener's Introduction" (HarperCollins, 1982). His most recent book was "Gregorian Chant and the Carolingians" (Princeton University Press, 1998.)

"Ken strongly believed that every scholarly publication should present painstaking, thoughtful research, exhaustively informed and clearly written, with the economy and suspense of a detective story," said Jeffery.

"He was very dismissive of grandiose, procrustean theories that try to explain everything," Jeffery added. "Some of his best known articles are exquisitely detailed studies of one single text or piece of music. 'Rein in your impetuosities,' he said to me once. 'This is slow stuff, this medieval musicology.'”

Levy received a senior Fulbright award and the 1989 ASCAP-Deems Taylor Award. In 1988, he was elected to the American Philosophical Society. In 1994, he was elected a fellow of the Medieval Academy of America. In 1995, following his retirement from Princeton, he was a Quatercentenary Visiting Fellow at Emmanuel College, University of Cambridge.

During his career, Levy served on the board of directors of the American Musicological Society, as well as on the editorial board of its journal. He was a member of the executive committee of "The New Grove Dictionary of Music" (ancient and early medieval music).

Levy is survived by his wife, Brooks Emmons Levy, who was a lecturer in classics at Princeton and served as curator of numismatics in Firestone Library's Department of Rare Books and Special Collections from 1967 to 2004; a daughter, Helen; and a son, Robert.

The Department of Music will remember Levy during the reception at the American Musicological Society meeting in Pittsburgh this fall.