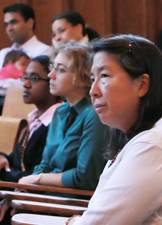 Participants in "Kaleidoscope: An Alumni Conference on Race and Community at Princeton University" listened to the opening address by President Emeritus William G. Bowen on Nov. 10. "This conference is to me a powerful reaffirmation of Princeton's recognition of the importance of not forgetting history, of not forgetting where we have come from as we focus on what is so clearly an unfinished agenda," he said.

Below left: Bowen (right) chatted with conference participants following his address in McCosh 50.

Bottom left: The Kaleidoscope event followed a successful conference, "Coming Back and Looking Forward," focused on the experiences of black alumni that was held in September and drew 500 participants.

(Note: This article was updated after the conference concluded.)

Alumni and other University community members kicked off a conference on diversity by hearing from a former Princeton president who has spent the years since he left conducting groundbreaking research on the topic.

President Emeritus William G. Bowen, who served from 1972 to 1988, gave the opening address at "Kaleidoscope: An Alumni Conference on Race and Community at Princeton University," which was held Thursday through Saturday, Nov. 9-11.

"This conference is to me a powerful reaffirmation of Princeton's recognition of the importance of not forgetting history, of not forgetting where we have come from as we focus on what is so clearly an unfinished agenda," said Bowen, speaking Friday morning in McCosh 50.

He traced Princeton's progression over the years in dimensions of inclusion and diversity: race, gender, religion and socioeconomics. "Princeton is, in my opinion, far richer today because of the greater inclusiveness achieved along [these] dimensions," said Bowen, who also is a 1958 graduate alumnus.

In going forward, he said, "There is much to be said for embracing the dictum of the architect Robert Venturi when he said what we must seek 'the difficult unity of inclusion rather than the easy unity of exclusion.'" 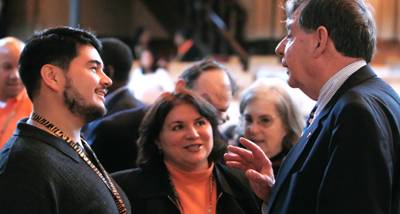 Bowen touched on findings from his research on race-sensitive admission policies and socioeconomic status published in his books, "The Shape of the River" and "Equity and Excellence in American Higher Education." He cited empirical evidence of the positive effects of policies to admit a more racially and economically diverse student body to colleges and universities.

He also spoke briefly about the approval by voters in Michigan Nov. 7 to amend their state's constitution to ban public universities and other state agencies from operating affirmative action programs that grant preferences based on race, color, ethnicity, national origin or gender. Bowen warned that the ban "could have very serious consequences" for those institutions as they seek to enroll a racially diverse student body.

Before his address, Princeton President Shirley M. Tilghman welcomed participants to the conference, stating, "What we are celebrating and exploring in this conference is the continuing changing face of Princeton University. This university has been evolving for many years now." She said such an evolution is critical because "a university that aspires to be an important institution of this nation and this world must be an institution that is training leaders of all hues. If we're not doing that, we're not fulfilling our responsibility."

The purpose of the Kaleidoscope conference, which attracted a registration of 500 participants, was to bring together alumni, faculty, students, senior administrators and trustees to reflect on changes that have occurred at Princeton in recent years, to identify today's challenges and opportunities, and to look ahead. It followed a successful conference, "Coming Back and Looking Forward," for black alumni that was held in September and drew 500 participants.

The conference started with a reception on Thursday evening and continued through a dinner and performance on Saturday evening. Following the welcoming remarks by Tilghman and the opening address by Bowen, there were presentations on campus diversity initiatives by University administrators and a luncheon panel of several students focusing on campus diversity experiences. The rest of the day on Friday was devoted to discussions on topics including "Race in the Arts" and "Politics and Race" led by faculty members and alumni.

A Friday dinner included a presentation on "The Princeton-Dillard Relationship in the Wake of Hurricane Katrina" by Danille Taylor, a 1974 Princeton graduate who is dean of humanities at Dillard. Princeton and Brown universities formed a partnership in September 2005 to help the historically black institution in New Orleans restore operations after its campus was devastated by the hurricane. It re-opened in January 2006. The dinner was followed by performances by students and alumni.

During the day on Saturday, participants attended sessions on undergraduate and graduate admission and outreach and on the Princeton Prize in Race Relations. Tilghman held a conversation with conference participants, which was followed by a luncheon featuring a presentation on the Princeton University Preparatory Program targeting high-achieving, low-income students from area high schools by faculty member Miguel Centeno.

Concurrent sessions led by faculty and alumni on Saturday afternoon explored topics ranging from religious diversity at Princeton to access to higher education. The event concluded with a dinner featuring an address by faculty member Albert Raboteau and a performance titled "Refried Latino Pride" by spoken-word poet Joe Hernández-Kolski, a 1996 Princeton alumnus.