Labyrinth bookstore to open in Princeton as Micawber closes

At left: Properties affected by the opening of the Labyrinth bookstore and the Princeton University Store satellite and other plans announced Dec. 4 stretch from the current Micawber's used book business at 110 Nassau St. through the Foot Locker at 122 Nassau St.

Labyrinth Books, one of the nation's leading scholarly bookstores, will open a store in Princeton in the fall of 2007 in the Nassau Street property currently occupied by Foot Locker, and the Princeton University Store will open a satellite apparel and insignia store on Nassau Street in space currently occupied by The Children's Place and Micawber Books. These moves follow a decision by the owners of Micawber Books to sell their business to the University after 25 years serving the Princeton community. 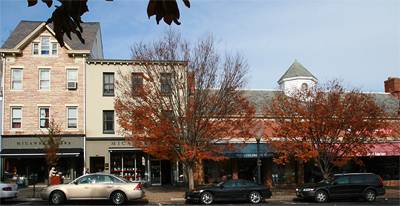 "We are proud of what we created at Micawber and when we decided the time had come to pursue other interests, we were determined to sell only to someone we felt would continue in its tradition," said Logan Fox, Micawber's founder and co-owner. "We selected the University, which has partnered with Labyrinth Books, because Labyrinth is exactly the sort of store that will fill the needs of the Princeton community."

"Micawber has served the needs of this community -- town and gown -- exceedingly well," said Princeton University President Shirley M. Tilghman. "This is a community that needs and deserves an absolutely first-rate bookstore, and I can't imagine a better successor to Micawber than Labyrinth. I am truly delighted that Labyrinth has agreed to operate a store on Nassau Street. I am also pleased that the U-Store will now have a presence on Nassau Street for its apparel and insignia business, while continuing to provide other services to students and the broader community in its current location on University Place."

After final contracts are signed, The Children's Place and Foot Locker will vacate the adjacent space at 116-122 Nassau St., popularly known to Princeton residents as the former Woolworth building, and the U-Store will lease a portion of the space currently occupied by The Children's Place, while Labyrinth will lease the rest of that space and the space currently occupied by Foot Locker. Known as Labyrinth Books at Princeton, the store will stock a broad range of scholarly and general books and its 70,000 titles will include an extensive children's section. Labyrinth also will take over responsibility for fulfilling the University's course book orders. The U-Store will phase out its book business after continuing to provide course books through the fall semester of 2007.

The U-Store will offer apparel and other Princeton insignia merchandise at its new location on Nassau Street while consolidating the rest of its non-book business on the first two floors of its existing location at 36 University Place. The third floor and mezzanines of that location will be returned to the University for uses that have not yet been determined. Labyrinth and the U-Store expect to be open for business on Nassau Street by November 2007.

"We look forward with much enthusiasm and great anticipation to opening a store in Princeton and to building on the wonderful foundation of independent bookselling established by Micawber," Clifford Simms, the president of Labyrinth Books, said. "We intend to create an exemplary scholarly and general interest bookstore that is devoted to reflecting the educational values and aspirations of the University and will, we hope, become a resource for the entire community. We believe we can create a store that will be a real civic space in which knowledge in all fields can be celebrated and discussed. We also take very seriously our obligation to serve the needs of students and faculty in providing course books in reliable, efficient and cost-effective ways through the availability of used, as well as new books."

Margaret Griffin, Micawber's other co-owner, said, "All of us at Micawber, staff and owners alike, feel great sadness to be closing our doors, but we also share a great pride in the legacy we leave behind. We were delighted to learn that the University would be interested in helping to bring another independent scholarly bookstore to Princeton and to make sure that Nassau Street retains a lively retail presence."

Dorothy Bedford, a Princeton alumna, Princeton resident and chair of the board of trustees of the U-Store, welcomed the increased visibility that the U-Store will have on Nassau Street.

"We are excited about re-establishing a presence downtown, and we hope to be an effective participant with other borough merchants in providing top-quality independent retailing for students and staff, residents and visitors," Bedford said. "Nassau Street should reflect the unique characteristics and interests of this community. I believe the proposed changes involving Labyrinth and the U-Store help achieve this goal.

"The advent of big chains, Internet sales and online resellers of used books have reshaped the retail environment for books in general and scholarly books in particular," she said. "The challenges of providing book service on a level commensurate with the University's reputation have been growing. While we have some sadness about phasing out books, the new arrangement with Labyrinth provides for specialized expertise beyond our resources while permitting us to focus on existing and potential lines of business that are also important to our members and customers. We hope our members will understand the forces behind this change and welcome the new opportunities it provides for us."

For the past 100 years, the U-Store has served the campus and the community as an independent cooperative managed by a board composed of students, who account for half of the board, along with faculty, staff and alumni. While organized primarily to serve its members, the store also attracts alumni, visitors to campus and members of the community. It is among the oldest retail establishments in Princeton.

The U-Store began as a student enterprise in the 1890s and organized as a campus cooperative in 1905, occupying space in West College and then on University Place. The new location will mark the third time in the store's history that it has had a satellite on Nassau Street, as the store operated a music department in the current Palmer Square area in the 1920s and a music shop in the current Chase Bank location at 18 Nassau St. in the 1930s. As Labyrinth becomes Princeton's textbook provider, the U-Store will continue to provide a broad range of products and services, including its convenience store, pharmacy, dorm furnishings and school supplies.

Mark Burstein, executive vice president at Princeton since 2004, noted that in a previous position at Columbia University he worked closely with Labyrinth during its successful opening of a site near that university in 1997. "Labyrinth was the store of choice for most students and faculty in Morningside Heights," Burstein said of the store that opened near Columbia.

"At a time when large bookstore chains are replacing independent bookstores on college campuses across the country, we thought it was very important to do what we could to make sure there would continue to be an excellent independent bookstore in Princeton," he continued. "Labyrinth aspires to join the ranks of the greatest scholarly bookstores in the world -- such as the Seminary Co-Op Bookstore in Chicago, Powell's Books in Portland and Blackwell's Books at Oxford University. Labyrinth has made tremendous progress in a short amount of time, and their Princeton store will be their biggest and best yet."

Labyrinth is a division of Great Jones Books Inc., which opened in 1995 in Yonkers, N.Y., as a wholesale book business specializing in academic and scholarly materials. After Labyrinth opened its 6,000-square-foot bookstore near Columbia University in 1997, the company launched a mail-order catalog featuring discounted scholarly titles in 2000, and then expanded further to open Labyrinth Books serving Yale University in August 2005 in New Haven, Conn.

"Labyrinth's interest in coming to Princeton allows us to accomplish several goals at once," Burstein said. "Labyrinth will continue the tradition of an independent bookstore on Nassau Street that has been such a wonderful resource to the community during Micawber's 25 years in business. The U-Store will be able to focus on being the best student department store at any college or university, and faculty and students will benefit from the kinds of excellent trade and text book services that Labyrinth has provided in Morningside Heights and New Haven."

Labyrinth Books: How a vibrant bookstore connects campus and community

Purchasing textbooks to be streamlined, more economical for Princeton students