Participants in a student-initiated environmental studies seminar this fall researched ideas for how the University can reduce its greenhouse gas emissions to help control global warming. Senior Tom Bohnett and junior Kimberly Bonner, shown here outside Buyers Hall, counted and analyzed thousands of windows on buildings across campus to evaluate options for improving energy efficiency. They were among 21 students in the course whose work will be presented this spring to administrators involved in the University's sustainability efforts. 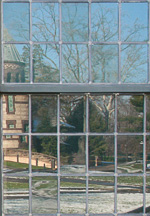 Princeton students concerned about global warming are taking a close look at how the University can contribute to solving the problem.

Participants in a student-initiated environmental studies seminar spent the fall semester combing the campus for ideas on how to enhance the University's efforts to mitigate its emissions of carbon dioxide, the major culprit behind global warming. The students worked to develop various scenarios for environmentally friendly strategies, ranging from upgrading to more energy-efficient windows and lights to broader ideas such as expanding the use of geothermal or solar heat around campus.

The seminar, "Toward an Ethical Greenhouse Gas Emissions Trajectory for Princeton University," was led by Tom Kreutz, an energy systems modeler at the Princeton Environmental Institute (PEI). The 21 students pursued research projects in several areas related to greenhouse gas emissions, including windows, lighting, laboratories, heating and cooling systems, water, transportation, renewable energy, future construction projects, production of food purchased by the University and opportunities to invest in off-campus carbon mitigation projects to offset emissions made on campus. They worked with members of the facilities staff to gather data and insights into Princeton's efforts in these areas.

The students analyzed projected costs and returns on investment for emission-control options, while considering the University's ethical obligations in protecting the environment. Kreutz is working with the students to finalize a set of recommendations that will be presented this spring to administrators involved in the University's sustainability efforts (see related story). Those recommendations also will be used as a basis for a policy task force this spring in the Woodrow Wilson School of Public and International Affairs that will focus on developing policies to encourage sustainable use of energy at Princeton.

The course focused on examining existing technologies and conservation techniques to reduce or stabilize greenhouse gas emissions. Students explored recent key findings in climate studies, including an influential 2004 study by Princeton researchers Stephen Pacala and Robert Socolow, which indicated that more aggressive use of current technologies could prevent global greenhouse gas emissions from rising for the next five decades.

"I hope when all is said and done, we'll be able to point at some things we discovered that the University isn't actively pursuing," Kreutz said. "The University has already looked at a lot of the areas we studied -- Princeton has a really crack facilities team. A key part of our work was assembling all in one place all the things that could be done or are already being done and try to get an overall picture."

Junior Kimberly Bonner said she found the seminar particularly appealing after serving as an intern last summer with the U.S. House of Representatives' Committee on Science and Technology in Washington, D.C. "A lot of what I learned was that change needs to happen from the grassroots in addition to from above, so the opportunity to really make a tangible difference in Princeton's own carbon mitigation efforts was something I really wanted to be part of," she said.

Bonner, who worked with senior Tom Bohnett in counting and analyzing thousands of windows on some 20 buildings, added, "I have a great respect for the work of our facilities staff. They really are making big efforts to be both economically efficient but to also reduce energy consumption. … A lot of our suggestions involve stepping up our efforts -- not necessarily something new, but greater commitment or intensity in the things we're already doing."

The seminar was established through efforts by the student group Greening Princeton, which drafted the successful proposal to create a seminar on greenhouse gas initiatives after meeting with Pacala, director of PEI; Tom Nyquist, the University's director of engineering; and Kreutz.

Nyquist served as the point person from the facilities department for students as they investigated their research projects, helping them find contacts, data and background on the University's sustainability efforts.

"The students were very enthusiastic and have a great passion for the subject. Our job was to tell them, as engineers, some of the practical challenges that we face," Nyquist said. "We have a lot of experience here dealing with energy conservation, so they were able to bounce ideas off us, and we worked back and forth to help them understand the practicality of some of the ideas that they've come up with. Some of them had pretty big-picture ideas, such as expanding the use of geothermal for heating the campus. That would need a lot of development, but it is an interesting concept."

"The passion that they have for the subject was very nice to see," he said. "It's going to be one of the leading issues of their time."

Sophomore Mark Smith, a member of Greening Princeton who participated in the seminar, said, "I see this as the major problem for my generation, and I'll probably spend the rest of my life working on environmental issues. I thought this class would be a great way to get practical experience solving a problem and learning as I go."

For their research project, Smith and senior Meha Jain studied laboratories in several buildings, looking in particular at whether fume hoods could be outfitted with sensors to automatically close the hoods and save energy when labs are not in use.

"We synthesized a lot of the data that already existed, looked at it in a slightly different way, and hopefully the added value is that in the class we brought together all the ideas we could think of," Smith said. "Maybe there will be a little more incentive for the University to implement some of these ideas with students saying they're excited about it."

Bohnett, who studied windows along with Bonner, said he viewed the course as "a rare opportunity for students to push the envelope in some small way and possibly get a big institution like Princeton to move a little more progressively on this." 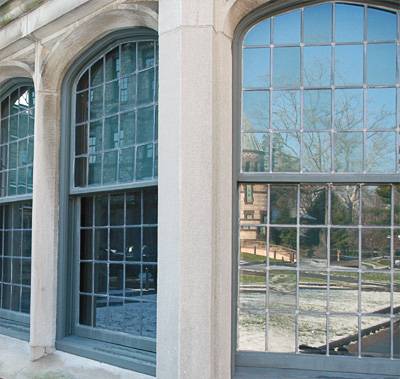 Bohnett and Bonner counted windows on 15 to 20 buildings across campus and analyzed the cost of window upgrades to improve energy efficiency in comparison to other initiatives that their fellow students were investigating. "It impressed upon me just how difficult it is to go through the process of evaluating a building for energy efficiency purposes and just how expensive it could be to make these kinds of upgrades," Bohnett said.

Kreutz said the students were enthusiastic in tackling unique challenges in collecting data for their projects, from counting light fixtures to figuring out how many hot showers are taken on campus every day. "It was certainly a real-world experience," he said. "It was much more like a Ph.D. experience, where nobody tells you the route. Instead you're told, 'This is the job -- figure out how to do it.'"

Recommendations from the course will be used as the basis for a Woodrow Wilson School junior policy task force led by Denise Mauzerall, an associate professor of public and international affairs and a faculty member in the school's Science, Technology and Environmental Policy program. The task force, "Development of Policy Initiatives for the Sustainable Use of Energy at Princeton University," also aims to present its findings to members of the University administration.

"I am really excited to be leading this task force," Mauzerall said. "The Intergovernmental Panel on Climate Change recently released its summary for policymakers declaring for the first time that climate warming is 'unequivocal' and that human activities are primarily responsible. Climate change is one of the most pressing environmental issues facing the world today. Princeton has an opportunity to be a leader in developing innovative university policy to use energy in a sustainable fashion and to reduce its emissions of carbon dioxide."

"Universities have an important role to play in both identifying ways in which greenhouse gas emissions can be reduced, setting an example for other institutions to follow, and educating members of the university community on what can be done to reduce both individual and institutional emissions," she said. "The role of our task force will be to examine what other universities have done and, in the context of Tom's class's findings, make suggestions as to what policies Princeton might consider adopting to reduce its carbon footprint."

This fall, Mauzerall co-led a course in which Wilson School graduate students examined greenhouse gas mitigation initiatives for New Jersey. The state's Department of Environmental Protection "has indicated the report will have an important and quite tangible impact on policy considerations at the state level," Mauzerall said. "My hope is that the undergraduate report we prepare this semester will be equally useful to Princeton." (A PDF of the graduate students' report is available here.)

Kreutz will continue working on the University's emissions issues as a member of the Princeton Sustainability Committee, a forum for faculty, staff and students to discuss environmental initiatives. He also is considering leading another seminar next fall to further explore an "ethical emissions pathway" for the University, building on the work of his students this fall.

"I really think they have provided an invaluable service, and it's been great fun," he said.