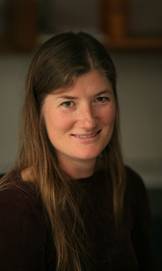 Sustainability efforts at Princeton are advancing under the leadership of Shana Weber, who joined the University this summer in the newly created position of sustainability manager.

Since that time, she has been working with the Princeton Sustainability Committee (formerly the Princeton Environmental Oversight Committee) to define target topics around which a number of working groups are being formed. One important goal for her first year is to help produce Princeton's first sustainability report, and the working groups are being organized to assist in meeting that goal.

The hope is that this report will serve as a mechanism for producing annual "state of sustainability" reports for the University, Weber said. "Such reports are also an excellent vehicle for raising campus community awareness, fostering discussion and bringing stakeholders together."

In a parallel exercise, she has been structuring a framework for the development of an Office of Sustainability that will support these efforts. Her proposal to develop this office has been reviewed and supported by University administrators.

The key to encouraging the growth of sustainability awareness on campus, she said, is involvement from all areas of the University. "Sustainability is very much a bridge-building effort -- an attempt to advocate collaborative, cross-disciplinary, creative approaches to meeting sustainability goals," she said. "Many of these relationships are already flourishing at Princeton, allowing us to think about sustainability on a campus-wide scale, and beyond."

Weber began by working with the Princeton Sustainability Committee, a group of faculty, staff and students formed in 2002 as a forum for exchanging ideas and introducing new environmental initiatives. Under the umbrella of that committee, three general topics are being discussed: institutional greenhouse gas emissions; resource conservation; and community education. Working groups are being formed to address specific subtopics within each of those broad topic areas, including: food; solid waste and building services; construction and construction sites; transportation; grounds and landscaping; purchasing; education; energy and CO2; water; and community education.

"Many of these working groups will have representatives from students, faculty and staff who will work together to develop preliminary goals for their area to be published in the first sustainability report," she said. "This will be a working document -- one that will certainly evolve and mature over time."

Weber said that the energy and CO2 group met for the first time in early February. "We have a lot of momentum in that area based on a course that was taught during the fall semester," she said. The class, "Toward an Ethical Greenhouse Gas Emissions Trajectory for Princeton University," sought to discover specific ways in which Princeton might reduce its carbon dioxide emissions. It was taught by Tom Kreutz, an energy systems modeler at the Princeton Environmental Institute (PEI), who is now a member of the working group along with two of his students. Stephen Pacala, the Frederick D. Petrie Professor in Ecology and Evolutionary Biology and director of the PEI, also has agreed to participate in the working group.

Most, if not all, of the working groups will have met for the first time by the end of February, Weber said. The deadline for the report is not yet set, but the Sustainability Committee is expected to discuss that date at its Feb. 21 meeting.

Framework for the future

While getting the working groups off the ground, Weber also has been focused on developing an Office of Sustainability. It's currently an office of one within the facilities department, but she hopes that soon will change and wants to have the plans in place.

"As part of the exercise to think about how this office would look in a year and two years and three years, I started thinking about how to focus staff, starting with student interns. It's not an accident that my office is developing along the same lines as the working groups. They're designed to be complementary."

Weber will have three undergraduate interns and one graduate student working with her this spring. Two of the interns will support the efforts of the working groups, one devoted to energy/CO2 and the other to purchasing. The graduate student will provide a more advanced level of support to Weber, helping in all aspects of the office, but taking a lead on sustainability issues related to transportation and other areas as needs dictate.

The third undergraduate intern, whose position is funded by Bert Kerstetter, a 1966 Princeton alumnus, will work on an office project that is separate from the committee's work but complementary to its community education goals. Since 2005, Weber has been co-producer and contributing science editor of "EcoTalk," a nationally syndicated interview format radio program dedicated to environmental sustainability. Last semester, Princeton students worked with Weber to produce two five-minute pieces for the program. These same programs have also aired on several public radio stations across the country. Under the guidance of the student intern, who has experience in radio work, Weber hopes Princeton students can produce several more segments for national distribution during the spring.

Weber's plans also include creating other outreach efforts, such as a Sustainability at Princeton website, and supporting the development of databases -- for example, determining ways to compile the information the working groups gather about sustainability so that it can be used to produce subsequent reports. She hopes to add more interns and eventually more staff as the workload increases.

Weber credits Michael McKay, vice president for facilities, Tom Nyquist, director of engineering, members of the Princeton Sustainability Committee, the student group Greening Princeton and others on campus for setting the stage for progress in the area of sustainability before she arrived. She said she feels Princeton is poised to play a more prominent local and national leadership role in this area.

"For a long time in higher education there have been environmental coordinators who existed in some corner of some department somewhere," able to address sustainability in only very limited ways, she said. "But now we're dealing with all-encompassing questions about our institutional carbon footprint or our institutional responsibility for global climate change, and this is far beyond just recycling or developing a purchasing policy. Each of these things are critically important, but the issue of climate change has elevated sustainability to a far more prominent level of discourse in higher education."

Weber said this is reflected by the number of full-time dedicated sustainability professionals across the nation. Just a few years ago there were perhaps a dozen, now there are more than 60 and growing.

"So forming the Office of Sustainability is important -- it provides the framework to develop a support structure for the institutional goal of sustainability," she said. "I can't tell you how delighted I am that this is happening. It tells me that all the pieces are in place at Princeton."