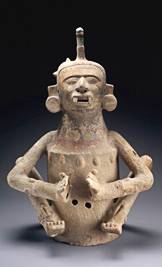 This rare ceramic Mexican effigy censer from 1500 A.D. is the focus of an exhibition at the University Art Museum on view through April 28. Titled “Sorcerers of the Fifth Heaven: Nahua Art and Ritual of Ancient Southern Mexico,” the display presents the results of 30 years of interdisciplinary investigation on ancient Mexican screenfold books and the ritual divinatory practices of the Nahua peoples of southern Mexico (1300-1500). 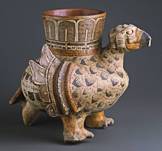 The exhibition also includes a gallery of related objects, such as a ceramic serving jar in the form of an eagle (above) and a jaguar that represents an animal alter ego of the effigy censer (below). 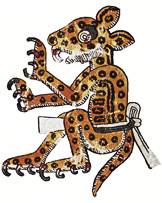 A significant acquisition of rare art from ancient Mexico is the focus of an exhibition at the University Art Museum on view through April 28.

"Sorcerers of the Fifth Heaven: Nahua Art and Ritual of Ancient Southern Mexico" is centered on a rare ceramic Mexican effigy censer from 1500 A.D., just prior to the European incursion. The display presents the results of 30 years of interdisciplinary investigation on ancient Mexican screenfold books and the ritual divinatory practices of the Nahua peoples of southern Mexico (1300-1500).

A recent addition to the museum's collection, the effigy censer is not only an extraordinary example of ceramic art, but also provides a unique opportunity for study, according to John Pohl, the Peter Jay Sharp Curator and Lecturer in the Art of the Ancient Americas.

"Ceramic is a pervasive medium in the arts of the ancient Americas, but too often the antiquity of the objects and an almost complete lack of historical context has left scholars little to work with in their efforts to interpret function and symbolism," Pohl noted. "The effigy censer is an exception, because the ritual purposes for which it was created became the subject of intense study by Franciscan and Dominican friars throughout the early colonial period." Their accounts indicate that the effigy represents a potent spirit force known as a Maquiltonal, meaning "Five Soul" in the Nahuatl language of southern Mexico.

The effigy censer is made in the shape of a seated figure with an enlarged head, expressive face and bottle-shaped body to which tubular limbs are attached. Although much of the surface has been badly eroded, enough of the fresco survives to recognize a fundamental iconographic detail: a white hand across the mouth, which is the mark of sorcerers, astrologers and healers, as well as witches and assassins.

Considered by its creators to have been endowed with a life force, the censer was spiritually activated by placing copal, a pine resin incense, inside its base. The smoke billowed up through the hollow body and out through the mouth, sending a prayer to the Maquiltonal, who was believed to reside, along with his four brothers, in the fifth of 13 heavens.

Many of the ritual practices with which the effigy censer was associated continue to the present day, despite concerted efforts over the last five centuries to eradicate them. The documentation of these rituals by 16th-century friars as well as modern-day observers allows art historians and archaeologists to gain a more profound understanding of an ancient work of art by examining it in the context of a larger symbolic environment of related objects, Pohl said.

The exhibition creates a symbolic environment by displaying the effigy censer in a gallery of related objects such as ancient pictographic books, mirrors and polychrome feasting vessels. Illustrated wall panels provide further interpretation and background information.

For more information, visit the exhibition's website. Details on lectures and other related events also are available on the University Art Museum's website.