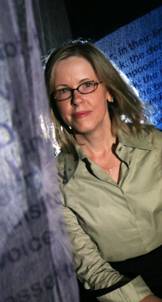 Susan Wheeler, a lecturer in the Council of the Humanities and the Program in Creative Writing, immerses herself in the English language through her writing and her teaching. After 30 years of writing poetry, she recently ventured into new creative waters, producing "Record Palace," a "mesmerizing little novel," according to Publishers Weekly.     Photo: Denise Applewhite

From the March 26, 2007, Princeton Weekly Bulletin

For poet Susan Wheeler, the key to teaching writing is presenting students with all the possible ways to express themselves.

"I try to encourage students to glimpse the entire field of possibilities," said Wheeler, a lecturer in the Council of the Humanities and the Program in Creative Writing. "Even if students have a preference already, I want them at least to be able to appreciate the spectrum. So, for instance, if they hate forms — what they really want to do is free verse — I encourage them to try a sonnet at least once, so they know what that experience is like and they're not afraid of it. I want them to exercise various muscles."

Wheeler often ventures into new creative waters in her own work. Though she has been writing poetry for 30 years, she recently tried her hand at fiction and produced a "mesmerizing little novel," according to Publishers Weekly.

"Susan Wheeler is one of the most adventurous poets writing today," said C.K. Williams, a lecturer with the rank of professor in creative writing at Princeton and a Pulitzer Prize-winning poet. "She takes risks, she investigates new ways to write and think, and, unlike many experimental writers, she does it with intelligence, discretion and diligence. Similarly, her novel is really unlike any other: odd, quirky, intelligent, intense."

Wheeler uses that deft creative hand — conditioned from years of writing poetry and teaching it in a variety of settings — to guide her students to find their own voice.

Wheeler has taught poetry workshops in New York City middle schools and at the New School for Social Research and the University of Iowa's highly regarded graduate creative writing programs. She has been teaching at Princeton since 1999.

In her introductory poetry workshops, Wheeler sometimes starts students out working not with their own words, but with someone else's.

"We'll do exercises with somebody else's language, so that the students are not that invested," Wheeler said. "We'll apply a systematic formula to take apart the language and rewrite a sentence in different ways, to show how elastic language is."

Sometimes students need to unlearn some of the writing lessons they have picked up in the past, Wheeler said.

"They have been told various adages which usually hold up really well — 'Show don't tell,' 'Write from your own experience' — but those may be getting in their way," Wheeler said. "I'll tell them if their poem needs to go in a different direction, they may have to lie a little."

Her guidance has helped Eric Bland, a member of the class of 2002, refine his writing. Bland, who received a master's degree in playwriting from Goldsmiths College at the University of London, now lives in Brooklyn, where he works at a nonprofit social service agency by day and writes plays in the evening.

"She taught me that the arts (and especially the arts that tend toward what one might call experimentation or abstraction) are the product of hard work rather than flair," Bland wrote in an e-mail. "It's clear to me I am implementing many of the subtle lessons I received as her student."

Jean Beebe, a member of the class of 2010, said Wheeler has met with her weekly to work on her poetry manuscript. "Although I've only worked with her for a semester, I feel like I've known her for a long time," Beebe said. "She has one of those personalities you just latch on to, who just always makes you feel comfortable. She is always willing to take the extra step, to put in the extra time, which is a rare and admirable quality."

Wheeler has been demonstrating the elasticity of the English language for years in her own work, which has taken bold approaches to sorting out the dissonance of modern life. "Ledger," a collection of her poems that examines money and God, won the Iowa Poetry Prize in 2004.

Poet John Ashbery said of "Ledger," "Susan Wheeler's narrative glamour finds occasions in unlikely places: hardware stores, Herodotus, Hollywood Squares, Flemish paintings, green stamps and echoes of archaic and cyber speech. What at first seems cacophonous comes in the end to seem invested with a mournful dignity: that of 'the jangling discourse of our nation.' 'Ledger' is a treasure map for those willing to understand the journey."

Her first book of poetry, "Bag 'o' Diamonds," was published in 1993 and won the Norma Farber First Book Award from the Poetry Society of America. Later collections include "Source Codes," a meditation on the human experience in the age of technology, and "Smokes," which was described by poet Robert Hass as containing "elegies, poems of urban and domestic angst, laments, invectives, cakewalks, struts."

Wheeler said her poems are often produced as "a conversation with other poems," but her creative process is not premeditated: "You have to not look sideways, but let the sideways view come in and then see what stew cooks up."

What Wheeler cooked up a couple of years ago was a novel, "Record Palace," that had occupied her for more than a decade.

"I had no idea what I was doing," Wheeler said. "As a poet it was very easy for me to work on each sentence, but to be able to see the whole was a different matter."

The novel is set in Chicago in the early 1980s, when Cindy, a young white woman from Thousand Oaks, Calif., arrives in the city to study art history as Chicago's first black mayor, Harold Washington, is elected. Cindy is drawn to the city's thriving jazz scene and ends up befriending Acie, a 60-year-old black man who owns a rundown record store that sells jazz albums. The narrative alternates among the first-person accounts of three characters, principally Acie and Cindy.

"I wanted to write about Cindy's understandably narrow idea of what a person of another race is made of," Wheeler said. "It was a mechanism by which I could show a white person's development in terms of racial complexity."

One of the pleasures of the novel is its lyrical language. In her current project, Wheeler is exploring her love of the vernacular. "The Maud Poems" capture the speech patterns and expressions of her mother, who grew up in Topeka, Kan., in a family that was partly Pennsylvania Dutch.

"She had all these expressions, many of which everybody knows, like, 'She's a good egg' and some that were completely kooky, like, 'He was busier than a cranberry bog merchant,'" said Wheeler.

Her love of language is the bridge that unifies her poetry, her fiction and her teaching. "It's a treat to be able to think about language for most of the day, and to midwife it for others," she said.

And watching students thrive is, for Wheeler, the greatest reward of teaching.

"I love being able to witness a student over time," she said. "It's like watching someone come out of a cocoon."

She doesn't subscribe to the old adage that says, "You can't teach someone else to write."

"Somebody didn't teach Rodin to be Rodin, but he worked with someone to learn all the techniques he needed to do his art, and I think the same is true with writing," she said. "You can give students the equipment, and help train their eyes and ears to edit themselves. That's the most important thing you can do, but that's a lot."