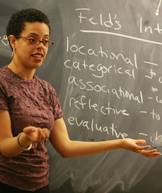 Postdoctoral fellow Mendi Obadike is teaching a freshman seminar this semester on "The Idea of Black Music," basing it on her work studying sound as an element of representations of blackness in American music, film and literature. The seminar examines what it means to identify something as black music, what associations are made when one defines something as black and how that relates to greater ideas of cultural connections and identity.

At left: Following the screening of a documentary on the topic, Obadike leads a discussion with Eben Novy-Williams (center) and Jerry Nnanabu about the connections between an obscure musical rhyme sung by an elderly black woman from the Gullah region of Georgia and a hymn once used in burial rituals of the Mende people in Sierra Leone.

The Princeton Weekly Bulletin featured stories on two freshman seminars, both focusing on the intersection between art and science, in its Nov. 20, 2006, issue. The April 9, 2007, issue includes stories on four more seminars — these a little more wide-ranging in their subject matter. Freshmen this semester are discovering the excitement and challenge of working in a small-group setting with faculty and fellow students on topics such as great books, the chemistry of chocolate, black music and the DNA/iPod connection. These are just a sampling of the 70 courses offered during the fall and spring semesters through Princeton's freshman seminar program. This year, some 950 freshmen — nearly 80 percent of the class — have enrolled. Almost universally, students say that their freshman seminar was one of their best academic experiences at Princeton and that they form their most enduring intellectual friendships with fellow students in the seminar.

Waiting for class to begin on a recent Tuesday afternoon, freshman Jess Jardine asked her peers to help settle a debate she's been having with her roommate.

"Is Rihanna black music? Does she count?" Jardine asked of the Barbadian singer whose music is popular on MTV and Top 40 radio stations.

It's a discussion one might expect to hear students having over lunch at the Frist Campus Center, but in Mendi Obadike's freshman seminar, "The Idea of Black Music," the exchange is an extension of the scholarly debate in which the class has been engaged all semester.

Obadike, a postdoctoral fellow in race/ethnicity studies and lecturer in English, is interested in sound and stereotype, and she based the seminar on her work studying sound as an element of representations of blackness in American music, film and literature. The seminar examines what it means to identify something as black music, what associations are made when one defines something as black and how that relates to greater ideas of cultural connections and identity.

"I'm really trying to use techniques that have happened in musicology, digital culture, cultural studies and narrative studies to think about how sound works and how we think about sounds as signs," said Obadike, a member of Princeton's Society of Fellows in the Liberal Arts. "What is getting invoked when we hear something?"

On this particular afternoon, the class examined these questions by discussing the documentary, "The Language You Cry In." The film traced the roots of an obscure musical rhyme sung by an elderly black woman from the Gullah region of Georgia to a hymn once used in burial rituals of the Mende people in Sierra Leone.

The documentary culminated as the woman from Georgia travels to war-torn Sierra Leone to meet a Mende woman who remembered the dirge sung by her ancestors. The two women did not speak the same language, but bonded by sharing their music.

When the film ended, Obadike asked students if the Gullah rhyme and Mende hymn could each be labeled as black music. Or, she wondered, was it only when the two songs were linked — through the Gullah and Mende women experiencing them together — could they be called black?

"But if our identity is always about the diaspora and how we are connected — as Jerry has argued — then how is our culture not about hearing the music from somewhere else?" Obadike responded. "Is it black music because it can be connected to the history of all these things that connect a people?"

Eben Novy-Williams agreed with his professor and concluded: "When you're linking Gullah people and Mende people from a thousand miles away, the only way to categorize it is as black music."

Following class, Obadike seemed pleased to observe that some students' opinions have changed since the start of the semester. She said her ultimate goal is to trouble students' beliefs rather than have them reach a definitive conclusion about the term "black music."

"It's about challenging the assumptions we make when we hear something," she said. "I want my students to come away with a better understanding of the ways in which our consumption of music intersects with notions of cultural or racial identity and stereotypes."