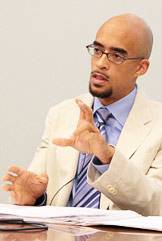 Joshua Guild, an assistant professor of history and the Center for African American Studies, focuses his teaching and research on 20th-century African American history and the making of the modern African diaspora. Guild challenges students to think about which kinds of people and events make their way into the public record, and which are erased from official history. (Photo: Denise Applewhite)

Barack Obama's historic candidacy for president made Princeton professor Joshua Guild think of Shirley Chisholm. In 1972, Chisholm, then a member of Congress, became the first African American candidate for president from a major political party, but her name barely came up during the 2008 presidential campaign.

"She laid the groundwork for candidates after her -- Jesse Jackson, Hillary Clinton and Obama, one could argue -- yet she is someone who is not well-remembered," said Guild, who has written an essay on Chisholm to be released this year in the anthology "Want to Start a Revolution?: Radical Women in the Black Freedom Struggle," published by New York University Press.

What events are remembered by history -- and the role of race in determining what becomes history and what is forgotten -- is of great interest to Guild. An assistant professor of history and the Center for African American Studies, Guild specializes in 20th-century African American history, particularly urban communities and the making of the modern African diaspora.

In his teaching and research, Guild probes under the radar of official history. He asks students to consider which kinds of people and events make their way into the public record, and which do not. "It's important to think about why certain events get remembered and taught, and certain events are erased," he said.

Guild's current research examines the evolution of two black communities -- one in central Brooklyn, N.Y., and one in the Notting Hill area of London -- that have large numbers of immigrants, a group that sometimes falls outside the bounds of civic recordkeeping.

"His research and teaching on African American and Caribbean migrations and community formation reflect his rigorous training in archival research as well as his wide-ranging interdisciplinary interests in black social movements and black popular culture," said Valerie Smith, the director of the Center for African American Studies and the Woodrow Wilson Professor of Literature. 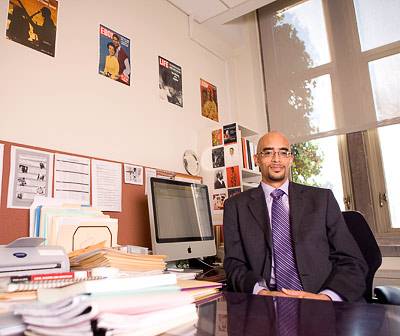 For his research on notions of community, Guild has relied, in part, on oral histories and has conducted his own interviews. "Interviews help keep me grounded as a scholar and a writer," he said, although sometimes he has to persuade sources that their observations are important. "People don't always recognize that they have a story worth telling." (Photo: Brian Wilson)

The growing celebration of Carnival

Guild has long been fascinated by the urban experience. A native of Boston, he studied the longstanding ties of African Americans living in New Haven, Conn., while earning his Ph.D. in history and African American studies from Yale University. Looking at cities is instructive in exploring notions of community, especially "how people consider the boundaries of their communities and how issues of race factor into those decisions," said Guild, who received his bachelor's degree from Wesleyan University. He came to Princeton in 2006, right after completing graduate school, spending a year as a senior research associate before being promoted to assistant professor in 2007.

One of Guild's approaches to examining urban communities is to look at the use of public space, which can become a contested area where conflict takes place between migrant communities and longtime residents, he said.

"Larger cultural issues are at play," he said. "There is a question of belonging, and by extension a question of the place of immigrants and other newcomers."

His current research grew out of his dissertation. It explores the black communities in Brooklyn, where large numbers of Afro-Caribbean immigrants moved after World War II, joining the existing black populations there, and Notting Hill, where Caribbean migrants settled in the late 1940s and established a black community. In examining the parallels and contrasts between the two areas, Guild has turned his attention to Carnival, the massive annual street festivals held in both places. The celebrations, which are valued traditions for Trinidadians and other Caribbean immigrants, are "the most important example of how migrants make claims to public space," Guild said.

Carnival, usually an outdoor celebration held in February or March right before Lent, initially was staged indoors in London because of the cold temperatures. Eventually the festival was moved to the summer and relocated outdoors, and by the 1970s it had grown from a few thousand celebrants donning costumes and dancing to calypso music to close to 2 million people, making it the largest street festival in Europe. But by this period fewer Caribbean immigrants were living in Notting Hill, so questions were raised about whether the festival belonged, Guild said. There were also significant clashes with police during the festival, exacerbating tensions.

"People asked, 'Is this really British or is this something foreign?'" Guild said. "The conversations about the place of Carnival became, by extension, about the place of these Caribbean migrants in a society that was being forced to come to terms with a changing population and the end of its empire."

In New York, Carnival was first celebrated in Harlem but flourished among the vast Caribbean community in Brooklyn, where it moved in the late 1960s. Held over Labor Day weekend, the U.S. version is called the West Indian American Day parade and takes its place alongside other major civic and ethnic celebrations in the city. Drawing similar attendance as its London counterpart, Carnival in New York City blends the conventions of a traditional American civic parade with the more dynamic, fluid traditions of the Caribbean. Although Carnival in Brooklyn is located in the heart of the largest Caribbean community in the United States, it also has experienced its own tensions with its neighbors, Guild said.

To learn about the history of these communities, Guild has relied on archival records and oral histories, and he has conducted his own interviews with ordinary people. He traces his interest in doing firsthand factfinding to his interdisciplinary background, which exposed him to ethnography and other methods used by social scientists.

"Interviews help keep me grounded as a scholar and a writer," he said, although sometimes he has to persuade sources that their observations are important. "People don't always recognize that they have a story worth telling."

He recently sat down with Duke Vin, a pioneering Jamaican disc jockey who moved to England in the mid-1950s. The interview was part of Guild's focus on the role of music -- particularly reggae, calypso and African American soul music -- in the communities he is studying. He plans to interview record shop owners and musicians in Notting Hill on his next research trip there.

"Joshua's work recuperates the everyday cultural rituals of diasporic subjects in order to illuminate the socio-political resonance and value of everything from Carnival celebrations to regional popular music subcultures," said Daphne Brooks, associate professor of English and the Center for African American Studies. "What's more, he is an engaging storyteller and gifted writer whose prose opens up the archive of black diasporic cultural history. He is one of the leading scholars of his generation conducting research on contemporary black cultural history, the politics of memory and transnational communal networks of exchange."

Guild also uses oral histories and archival records in several of the courses he teaches, including "The Civil Rights Movement." Adrienne Simpson, a member of the class of 2008, said the class analyzed the movement from several angles, "challenging our conventional understanding of who was involved and what actually occurred during that historic era." (Photo: Denise Applewhite)

The role of memory in history

In his undergraduate class "Memory, History and the African American Past," Guild teaches students to use primary source material by having them do a research project relying on such sources. The class explores the issue of how events get memorialized by looking at the 1921 Tulsa Race Riot, when a single incident in Tulsa, Okla., sparked a massive outbreak of violence against the black community, razing a thriving neighborhood and killing as many as 150 people. Afterward the event was covered up. The local newspaper removed key articles about the riots from its archived bound volumes, and government officials destroyed relevant documents, Guild said.

"The event was quite literally wiped from the record," he said. "That's an opportunity for students to think about how these kind of issues have real consequences in people's lives, and how important memory is in history."

As a contrast, the students also examine the lynching of Emmett Till, a 14-year-old African American from Chicago. Till was visiting relatives in Mississippi when a conversation with a white woman led him to be kidnapped and murdered by two white men. Photos of Till's disfigured body, displayed in an open casket at his mother's insistence, ran in Jet magazine and other publications, showing people throughout the world what had happened to him and preserving the event for history.

"There are many people for whom that event is a signal moment" because of those photographs, Guild said. "Many who became active in the civil rights movement point to that as a moment of transformation for them."

In another class, "The Civil Rights Movement," Guild uses personal testimonies and oral histories to help students understand how African Americans mobilized politically from 1945 to 1975.

Adrienne Simpson, a member of the class of 2008, said the class analyzed the movement from several angles, "challenging our conventional understanding of who was involved and what actually occurred during that historic era. I walked away from the class with a much deeper appreciation of the courage of those who participated and also a better understanding of the tactical, racial and theological diversity that existed within the movement."

Guild also teaches "African American History From Reconstruction to the Present," which Aditi Eleswarapu, a member of the class of 2009, took last spring. The course covered not just the history of well-known African Americans, Eleswarapu said, but also "the contributions of working-class African American women, the development of hip-hop and the experiences of African American Princeton alumni. As a result, this course not only challenged me to learn new material but to consider multiple perspectives when studying history, which is an approach to the discipline that I continue to apply to my other work in the department."

Guild's teaching and research are preserving pockets of history that have sometimes fallen under the radar, like the presidential candidacy of Chisholm, the first black woman to serve in Congress. For her run for the Democratic presidential nomination, Chisholm tried to form a broad-based coalition. She garnered support from blacks and Hispanics, and especially energized young people, Guild said.

"In terms of her vision," he said, "you can see many ways Obama picked up her mantle."

Notes from the field: Following the routes of U.S. deportation through history

Filmmaker Kobina Aidoo will screen and discuss his work