Notes from the field: Following the routes of U.S. deportation through history

Olivia Mena is a postdoctoral research associate with the Department of African American Studies whose spring seminar, “Radical Subjects: Race, Deportation and Diaspora,” explores the historical practice of deportation in the United States both past and present.

Mena received her Ph.D. from the Department of Sociology at the London School of Economics. She describes the course below, focusing on a spring break trip to London to learn about 1950s political deportees. 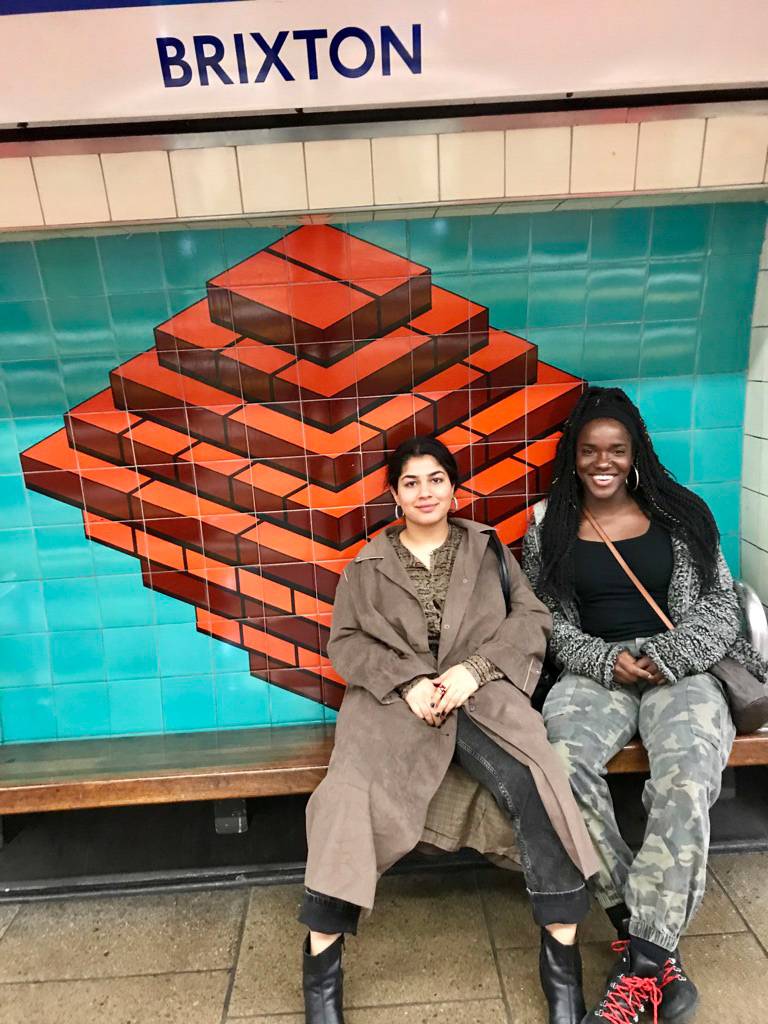 From left: Princeton undergraduates Aisha Tahir and Frelicia Tucker wait to ride the London Underground at Brixton station in South London. They spent their spring break working with Olivia Mena, whose spring seminar, “Radical Subjects: Race, Deportation and Diaspora,” explores the historical practice of deportation in the United States both past and present. Mena is a postdoctoral research associate in the Department of African American Studies.

We are living in an age of unprecedented migration. It is a historical moment when physical movement across state borders is one of the highest rights and privileges, and state borders are rebuilt and reimagined as walls and fences. This is the broader context in which my students and I started our spring semester committed to thinking about the practice of deportation in the United States in the very broadest sense in our African American studies course “Radical Subjects: Race, Deportation and Diaspora.” What does it mean to banish another human, politically and socially? It is a simple question, but one that has required us to think across the contours of race, nation and belonging in the United States.

In the course, we have read policy documents, court transcripts, FBI files, testimonies and writings about deportation, including materials written by the people targeted, ensnared and expelled from the political community of the United States at different historical moments. Our thinking about these questions did not end at the U.S. national border.

Over the spring break, we set out for London in search of the archives and traveling histories of some of the itinerant and exiled thinkers we were studying. We followed the route of several deportees from the U.S. back to Brixton, a neighborhood in South London where Trinidadian writer C.L.R. James and his compatriot Claudia Jones ended up after their deportations from the United States during the 1950s at the height of McCarthyism.

We spent the week working in the Black Cultural Archives and the Lambeth Archives sifting through old copies of the West Indian Gazette, a newspaper founded and edited by Claudia Jones that is considered to be one of Britain’s first black newspapers.

We studied the newspapers, along with other materials, in our effort to build a better picture of the international network of contributors, the people represented in its pages, and also those who visited Jones’ newsroom that sat above a record shop on Brixton Road, a list which includes well-known U.S. revolutionary figures like Reverend Martin Luther King Jr., W.E.B. Du Bois, and Princeton native Paul Robeson as well as many other anti-colonial leaders from countries around the world.

The pages of the West Indian Gazette offered us a rich map of these diasporic and interconnected political actors and their efforts and solidarities across borders to work for larger political ideals of freedom and self-determination and to connect struggles for racial equality in the U.S. to anticolonial struggles in other parts of the world.

We traced Jones’ political legacies in her ideas and her writing, and also her lasting impact working in the community. She organized and hosted the first Carnival in Britain, beauty pageants and events as a way of bringing people together to confront the larger climate of racial violence directed at the West Indian community living in London. 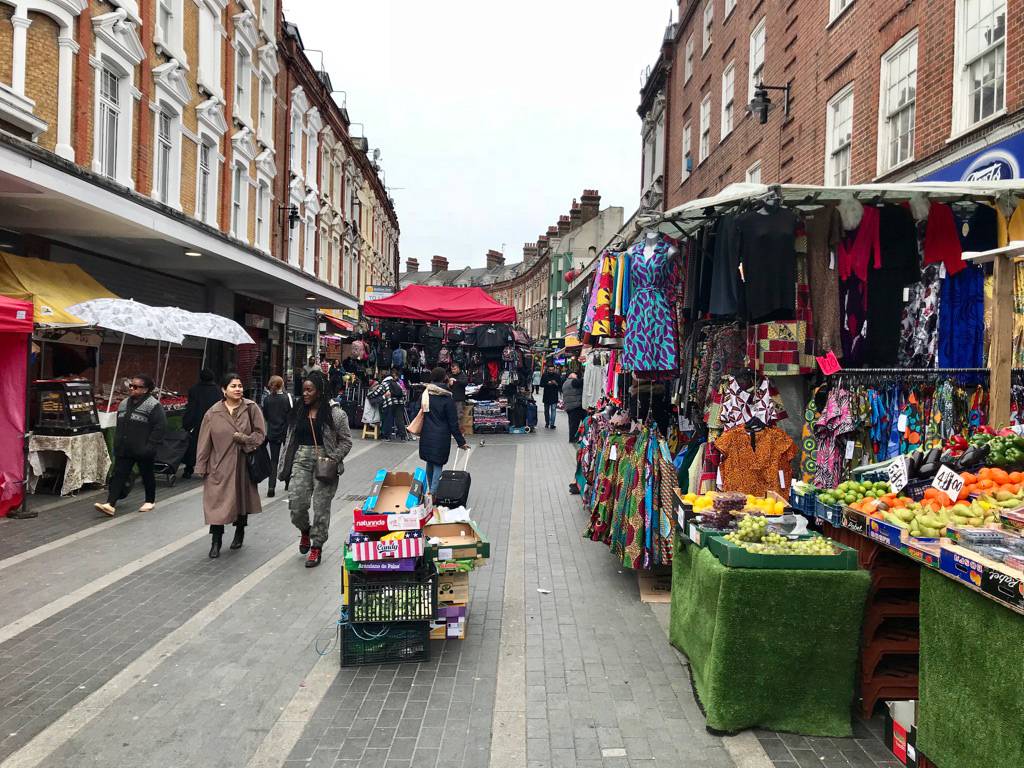 Tahir and Tucker explore some of the neighborhoods and markets in East London during their downtime.

Frelicia Tucker, a first-year student, noted: “I think the biggest takeaway from our interactions with the primary sources stemming from Claudia Jones’ work was the opportunity to see how far her connections traveled. Her framework of identity and community was not bounded by oceans, gender, class or race.”

Added Tucker: “Our work also showed how sometimes the most crucial bits of history are discovered in the places you are not intentionally looking at. While the archives held valuable articles and photos of Jones, it was an unscripted evening visit to the New Beacon Bookstore that preserved a more tangible part of Jones; there, we talked to people who were directly affected by the Windrush period and who felt the impact of Jones’s attempt to form a community through the West Indian Gazette.”

We also encountered the transnational confluences in the histories of deportation and reflected on how these histories still reverberate in the present. When the U.S. Immigration and Nationality Act of 1952 effectively shut the borders to Afro Caribbean migrants coming to the United States, their migration routes shifted to Britain during a historical period of Caribbean migration known as the Windrush generation. More than 50 years later this generation of migrants was in the British headlines again in 2018 when thousands of Commonwealth-born British residents were wrongly targeted for deportation under the U.K. Home Office’s “hostile environment policy” — measures designed under Theresa May’s tenure as Home Secretary to make it so difficult for people without authorization to be in Britain, that they would decide to "voluntarily leave" the country. 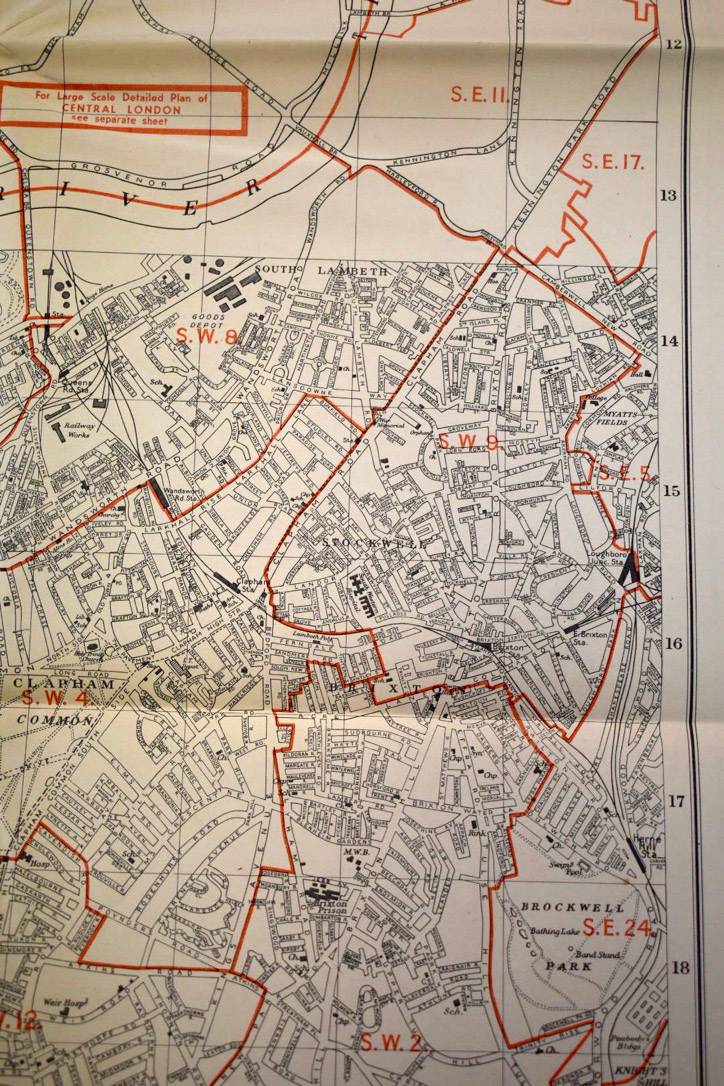 The students and Mena examined several archives in Brixton, including those of Trinidadian journalist Claudia Jones who ran the West Indian Gazette from the Afro Caribbean neighborhood.

“Going to London and getting the chance to stay in Brixton while trying to understand the community and culture Claudia Jones created after being deported by the U.S government was an experience that allowed me to think critically about deportation as more than political or legal,” said sophomore Aisha Tahir.

“From this trip, I learned to think about race, class, immigration and culture, not as separate, but connecting, realities. It has led me to decide on concentrating in African American studies,” said Tahir.