Students in the freshman seminar taught by Meghan Durham, a lecturer in theater and dance and the Lewis Center for the Arts, traversed an imaginary catwalk to study the way movement can reflect identity and culture. From top, Durham joined students Kadeem Gill, Jessica Cabral and Julia Bluher in the exercise during a session of the seminar held in the Wilson College dance studio.

Above left: Durham said it's essential to establish a classroom environment where differences and differences of opinion are met with mutual respect. “I enjoy that this group is willing to really embrace their differences," she said. "To them differences are something they are comfortable with, rather than a taboo."

At left: Durham, a professional dancer and choreographer, said, "I am interested in capturing students at the beginning of their college experience to introduce them to the ideas of identity, culture and difference that are housed in their embodied experience, literally there at their fingertips."

Seminars set the tone for freshmen In their first semester as Princeton students, freshmen this fall have been exploring issues of identity through movement and dance, evaluating truth in historical texts and examining the impact of global warming through fieldwork in the waters of Bermuda. These are among the array of topics covered in this year’s Freshman Seminar Program. The seminars stress close interaction with faculty members in small-group settings and an emphasis on inquiry that will set the course for the students’ years at Princeton. The 75 seminars being offered this fall and spring are expected to enroll some 1,000 freshmen, including a number who have signed up for both semesters. Almost universally, students say that their freshman seminar was one of their best academic experiences at Princeton and was the catalyst for some of their most enduring intellectual friendships with fellow students. Each seminar is hosted by a residential college. Class discussions often continue in informal settings both on and off campus, through meals, guest lectures, field trips and other activities. The Dec. 10 issue of the Princeton Weekly Bulletin includes stories on three of this fall’s freshman seminars.

The afternoon began with each student revealing a distinctive physical trait: a birthmark on an arm, a bald spot caused by a childhood accident, a chicken pox scar. A few hours later, the class moved into the Wilson College dance studio, where the students and the professor took turns striding across the floor as if walking a catwalk.

In Meghan Durham's freshman seminar, "What the Body Reveals: Identity, Culture and Difference in Movement and Dance," exploring one's own body and experiences are as essential to learning as the assigned readings and papers. The class examines how a person's body, and the way he or she moves, is a reflection of identity and culture.

"I am interested in capturing students at the beginning of their college experience to introduce them to the ideas of identity, culture and difference that are housed in their embodied experience, literally there at their fingertips," said Durham, a lecturer in theater and dance and the Lewis Center for the Arts.

The three-hour seminar usually is split between the classroom and the studio. At a recent session, guest lecturer Lindsay Browning, a professional dancer and photographer, led students in activities that examined movement choices within the context of consumer culture. As pulsing dance music played, students ambled exaggeratedly around the room and then posed for Browning's camera. The exercises challenged students to use their bodies and faces to express their personality and how they were feeling in the moment, as opposed to trying to match media representations of beauty, the ideal body and gender expectations.

"I am really asking students to put their bodies on the line in this class, and they all have been willing to put themselves out there," said Durham, a professional dancer and choreographer who readily joins her students in group exercises. 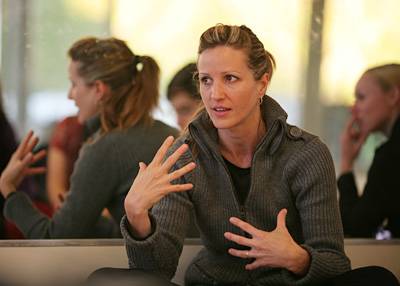 Durham said the 16 freshmen -- a diverse group that includes equal numbers of men and women -- are very willing to challenge each other. This dynamic was evident as the class discussed the book "Bodies: Exploring Fluid Boundaries," by social and cultural geographer Robyn Longhurst, and watched two video clips that examined gender identity. Scenes from a documentary about women bodybuilders and a movie starring three leading actors as drag queens sparked debate about sex versus gender and how the body is used to define both.

"Even though sex is what you're biologically born with, gender is something you have relative control over. You can see it in the case of female bodybuilders who try to almost defy their sex by taking on masculine characteristics," Philip Sopher said.

"It was interesting that the best bodybuilder in the film felt the need to make everyone aware that she considers herself a powder puff," Julia Bluher said of a female champion whose muscles were as marked a feature as her makeup and teased hair.

Woven through their arguments about gender roles and social expectations for men and women were personal examples from students' lives. One student recalled the feeling of not fitting in as a young boy because he excelled at singing and dancing, while many students talked about the stereotypes and judgments their high school peers made based on how others dressed or styled their hair.

"People treat you differently depending upon how you look," said Tess Wood. "I was a tomboy when I was young, but in high school my body changed and so my personality changed in reaction to how people treated me."

The discussion continued, using the context of the body and movement to examine issues of sexism, racism, homophobia, privilege and social organization. Given that these subjects are often central to seminar readings and exercises, Durham said it's essential to establish a classroom environment where differences and differences of opinion are met with mutual respect.

“I enjoy that this group is willing to really embrace their differences," Durham said. "To them differences are something they are comfortable with, rather than a taboo."