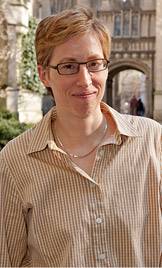 Margot Canaday, an assistant professor of history, is a political and legal historian who specializes in gender and sexuality in modern America. Her research focuses on the ways gender has interacted with institutions such as government and the economy, and she has taught courses on the American state, gender and work, and approaches to American history.

In the span of a 50-minute history class this spring, Princeton University professor Margot Canaday wove the complex tale of the Lavender Scare, in which the American government led a vigorous campaign to purge homosexuals from its ranks, resulting in more firings than the anti-communist Red Scare of the same post-World War II period.

The range of materials Canaday cited — testimony from congressional hearings, executive orders, State Department and Navy memos, court cases, statistics, a quote from an anthropology paper, and anecdotes, both personal and from primary sources — showcased her style of teaching. It also revealed the way Canaday builds a case for arguments in her research — with precision, insight and massive amounts of supporting documentation.

Canaday, an assistant professor of history who will be promoted to associate professor July 1, is a political and legal historian who studies gender and sexuality in modern America. The Lavender Scare lecture was part of her undergraduate course "Gender and Sexuality in Modern America." She also regularly teaches a graduate seminar on the history of sexuality in America, and has taught courses on the American state, gender and work, and approaches to American history.

Her first book, "The Straight State: Sexuality and Citizenship in 20th-century America," on how the federal government used its growing power to shape sexual norms through the first three-quarters of the 20th century, has won seven major awards from a diverse group of organizations, including the Organization of American Historians, the American Political Science Association, the Association of American Law Schools and the Lambda Literary Foundation.

The book is an extremely important contribution to the field, Princeton history professor Hendrik Hartog said.

"The interesting thing about Margot's work is it both obviously is engaged with the question of gay and lesbian history, and it is also a part of rethinking how one does the history of the 20th-century state — the growth of the state, the federal government as shaping all areas of American life," said Hartog, Princeton's Class of 1921 Bicentennial Professor in the History of American Law and Liberty. "She is a very fine storyteller, so she can take what looks like dull, bureaucratic material and craft it into accessible and fascinating stories."

A student engages in the discussion in the precept for Canaday's course "Gender and Sexuality in Modern America," which covers political and cultural shifts in gender and sexuality over the 20th century. (Photo by Denise Applewhite)

Born and raised in Cedar Rapids, Iowa, Canaday earned her undergraduate degree in American studies at the University of Iowa and her Ph.D. in history at the University of Minnesota. Drawn to graduate school because of her interest in feminism, Canaday initially was reluctant to take on what she perceived to be a risky topic for her dissertation, on the connections between citizenship and sexuality. Though she was concerned about how writing about gay and lesbian history might affect her chances on the job market, the topic was the one she felt had the most promise, as little research had been published in this area.

To pursue this work, she moved to Washington, D.C., to research federal records at the National Archives. Canaday still lives there with her partner, Rachel Spector, when the University is not in session.

"It was really needle-in-a-haystack searching," Canaday said. "Every agency I looked at, the records were organized in a different way. Some of them had a logic, and some of them were chaotic."

In addition to searching the archives, Canaday's research included filing Freedom of Information Act requests with various agencies and suing U.S. Citizenship and Immigration Services for access to public records.

Barbara Young Welke, a professor of history and law at the University of Minnesota, served as a co-adviser on Canaday's dissertation committee. Welke regularly refers students to Canaday's work as a model for how to conduct research that, in Canaday's case, led to pioneering findings.

"From the outset, it was clear that Margot's work had the potential to transform understandings of U.S. statebuilding, of the history of citizenship, and of the history of sexuality," she said. "Margot has the fundamentally important gift of taking a huge set of questions and placing them in a manageable frame." 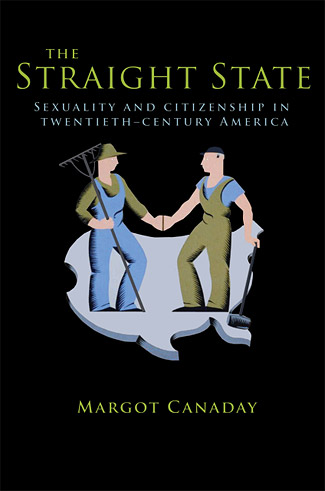 Canaday's 2009 book "The Straight State: Sexuality and Citizenship in 20th-century America" demonstrates how the federal government used its growing power, especially in the realms of the military, immigration and welfare, to shape sexual norms through the first three-quarters of the 20th century. (Image courtesy of Princeton University Press)

After coming to Princeton as the Cotsen-Perkins Postdoctoral Fellow in the Society of Fellows in the Liberal Arts and a lecturer in history in 2005, Canaday worked on turning her dissertation into a book. "The Straight State" examines how sexuality and citizenship were intertwined in military, immigration and welfare policy in the 20th century. Canaday shows how these three areas of the government grew and became involved in regulating homosexual activity (often described by government officials as sexual perversion) while boosting marriage and traditional gender roles in order to deal with perceived national security threats, the makeup of the citizenry and the distribution of resources.

In the three years since its 2009 publication, the book has garnered accolades from academic organizations in the fields of American studies; history; law; lesbian, gay, bisexual, transgender (LGBT) history and studies; and political science.

Canaday credited some of the book's acclaim to its moment in history. "The culture changed so much in the basically not-quite-10 years from when I conceived of the dissertation, with some trepidation about what it would mean for my career, and when it came out" as a book, she said. "Those were years in which the earth moved for LGBT Americans."

For her current project, which is still in the early stages, Canaday is studying sexuality and gender in the American workplace from 1945 to the present. Canaday said she plans to follow two general research tracks: the increased acceptance of gays and lesbians in the workplace despite few legal protections, and the ways in which gender boundaries are still very fixed for certain occupations, such as nursing and auto repair, despite antidiscrimination laws that include gender as a protected category. This project, Canaday said, will allow her to return to her interest in feminism and write about women, who were not a central focus of her first book.

Canaday is drawing on a deep but scattered reserve of sources, from corporate archives and court cases to union records and occupational licensing records. She is also gathering oral histories of lesbians and gays who were born in the 1930s and therefore lived through the Lavender Scare, gay liberation, the AIDS era and the current acceptance of gays and lesbians in some American workplaces. She has completed nearly half of the 100 interviews she hopes to conduct.

"With people of that age, things are so different now that they're pretty eager to say, 'Let me tell you about ...,'" Canaday said. "I think I'll never do anything as personally meaningful in my career as these sets of interviews."

The common themes in her research to this point, Canaday said, are the legal and political lenses through which she approaches her topics, as well as her interest in big institutions such as the federal government and the economy. "Bureaucracy is interesting to me," she said.

"One of the things about working in LGBT history, or the history of sexuality, that's great is that even though the research is really challenging, there's just so much wide open space in the field," Canaday said. "You feel that whatever you do, it's going to matter in the sense that it'll be something we don't know about yet."

At Princeton, Canaday has become involved with the programs in American studies and gender and sexuality studies, as well as Whitman College, as a faculty member in residence this year.

Canaday, who is also the Philip and Beulah Rollins Bicentennial Preceptor, has taught both her undergraduate and graduate classes on sexuality three times at Princeton. According to her graduate students, Canaday is respectful of different viewpoints, approachable, generous with her time, energetic and enthusiastic. She challenges them to delve into the building blocks of other historians' work, from the primary sources to publications, to see how good scholarship is created, said Nimisha Barton, a fifth-year graduate student in the history department.

"This forced us to really engage with the work — to understand not just the argument, but the way that the argument was constructed," Barton said. "It's an important lesson for historians who have yet to go out into the field and conduct their own research."

Canaday also mentors students on teaching, said Alix Lerner, a third-year graduate student in history who is leading a precept for the "Gender and Sexuality in Modern America" course.

"Margot has been wonderfully supportive and informative," Lerner said. "She holds a weekly lunch for the preceptors, so we have plenty of time to talk to her about any concerns or questions we might have. The entire experience has been superb." 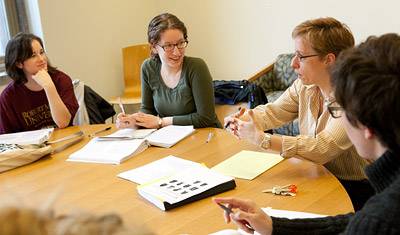 To help undergraduates engage intellectually with the material, Canaday injects classes with a bit of humor — balanced with a thorough exploration of the texts. "I think it's pretty inherently interesting to them," she said. "Sometimes I try to make it a little boring so that they remember that it's serious."

Senior Ariel Trilling said she enjoyed the experience of working with archival material in Canaday's "Gender and Sexuality in Modern America" class.

"Professor Canaday allowed us to delve right into primary documents from the National Archives for our first paper," she said, referring to an assignment in which Canaday gave students Army and Navy memos from the 1920s and '30s on "sex perverts" in the military to analyze for a short paper. "It was a more exciting way to familiarize us with a particular historical issue than assigning a lot of secondary-source reading."

That undergraduate course was one of the major factors that influenced senior Emily Rutherford to major in history. Rutherford, who has since taken two other courses with Canaday, including her graduate seminar, is a Marshall Scholar who plans to pursue a master's degree at the University of Oxford next year and eventually become a history professor.

"I learned that history is so much more than the average high school class about the Revolutionary War or the Civil War," Rutherford said. "Professor Canaday was emphasizing what history is about — change over time, ways people and places and social movements interact with each other."

Canaday guided class discussions without overpowering them, Rutherford said, and she also served as a role model by being supportive, encouraging and comfortable in her skin. Rutherford described herself as someone who is not conventionally feminine, and she had worried about what that meant for her professional future.

"It was inspiring to me to see that you can give a lecture or an academic talk without conforming to traditional ideas of how a woman should act or dress … to not have to wear a skirt or have long hair to talk to a group about something you're an expert in," Rutherford said.

Canaday said she has found it easy to fit in at Princeton.

"Part of what works for me about Princeton is that I'm an Iowan and it feels like a small town to me — a small town with interesting people," Canaday said. "I feel like there's a sort of soul, and the faculty are committed to the institution and committed to the students. It's actually great."