What should every Princeton student, upon graduating, know about America?

A new course in the Program in American Studies, being taught for the first time this spring, seeks to answer that question by immersing students in an interdisciplinary cross-section of the American experience — from the familiar to the unfamiliar.

The syllabus for "America Then and Now" is filled with historical and contemporary novels, poems, film, songs, paintings, and archival documents. Students will examine widely disparate but related items — from the Gettysburg Address to the songs of Bruce Springsteen, from Dr. Spock's "Baby and Child Care" to Amy Chua's controversial 2011 Wall Street Journal article "Why Chinese Mothers Are Superior," from the paintings of Alfred Bierstadt to the 1977 movie "Saturday Night Fever."

Assignments and class discussions are designed "to prompt a range of sensory and cognitive experiences," said Hendrik Hartog, the Class of 1921 Bicentennial Professor in the History of American Law and Liberty and director of the Program in American Studies. Hartog will co-teach the course with Anne Cheng, a professor of English and African American studies, and Rachael DeLue, an associate professor of art and archaeology. 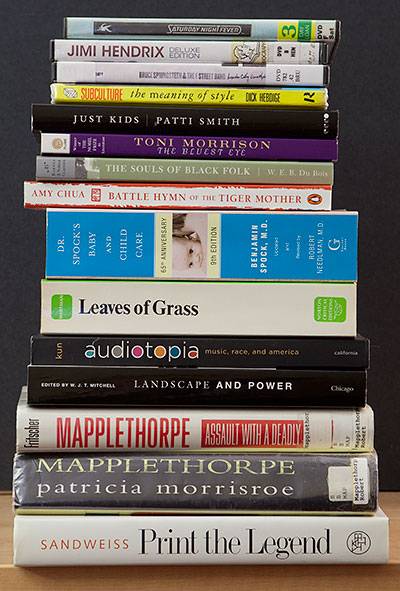 A new course "American Then and Now," being taught for the first time this spring, will immerse students in an interdisciplinary cross-section of the American experience. The syllabus, which is designed "to prompt a range of sensory and cognitive experiences," outlines a course filled with historical and contemporary novels, poems, films, songs, paintings and archival documents, from Walt Whitman's "Leaves of Grass" to the 1977 movie "Saturday Night Fever." (Photo by Denise Applewhite)

Nearly 200 undergraduates, ranging from freshmen to seniors, are enrolled in the course.

Close to five years in the making, the course grew out of a 2008 workshop, "Thinking About Diversity, Ethnicity and Difference in the 'New' Princeton," attended by members of the Princeton faculty and administration spanning the University.

"It was an intimate forum for frank and rigorous discussions about the opportunities and challenges facing the institutional and intellectual commitment to diversity at Princeton," Cheng said.

The workshop, which included representatives from more than a dozen academic departments and programs, jumpstarted an initiative to rethink the curriculum of the Program in American Studies and reflect broader changes in the field.

"American studies as a field has been undergoing much disciplinary self-questioning and changes in the past decade," Cheng said. "The outcome of the workshop was a unanimous agreement that Princeton could become a leader in teaching students about the complicated issues that are rapidly emerging surrounding the issue of racial, ethnic, gender and cultural diversity, beyond the black and white dyad."

"That was the beginning," Hartog said. "The course has been constructed to illustrate diverse and distinctive ways of 'knowing' an immense and impossible subject — America."

To help students who are looking at American history from the vantage point of the early 21st century approach such a vast area of study, the course is divided into 12 units. In the "American Properties and Terrains" unit, for example, students will read legal documents including "U.S. Steel Workers of America v. U.S. Steel Corporation," listen to the Bruce Springsteen song "Youngstown," and view historical and contemporary photographs of steel mills and life in steel mill towns.

By examining individual items — a song, a poem, a painting — students will learn "how the microanalysis of specific objects yields major insights about the bigger picture of American culture, history and experience," Hartog said. "Analyzing a rock song, for instance, can aid in illuminating aspects of economic history, while examining a work of art can yield information about immigration policy or controversies within the scientific realm." 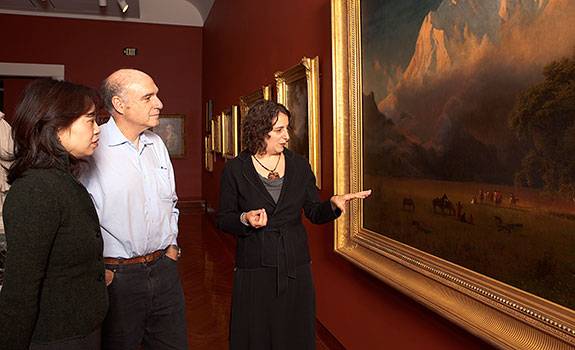 Co-instructors Anne Cheng (left), a professor of English and African American studies; Hendrik Hartog, the Class of 1921 Bicentennial Professor in the History of American Law and Liberty and the director of the Program in American Studies; and Rachael DeLue, an associate professor of art and archaeology, hold a planning session for the "American Landscapes" unit in the Princeton University Art Museum. One of the paintings the students will study is "Mount Adams, Washington," 1875, by Albert Bierstadt (above). (Photo by Denise Applewhite)

In the unit on "American Landscapes," students will view landscape paintings dating from the mid-1800s through the 20th century in the Princeton University Art Museum, as well as various kinds of images of the urban landscape, including a silent film of New York City from 1920, and will read an excerpt from Walt Whitman's "Leaves of Grass."

"The history of the United States is in many ways a history of land: its discovery, exploration, conquest and settlement and, more recently, its over-development and degradation," DeLue said. "Put simply, looking at pictures of nature and of cities is really a matter of looking at history and historical consciousness in the making."

During the unit on "Borders and Movement," New York-based playwright Jorge Cortinas will visit the class to discuss the dramatic portrayal of migration to America. Students will watch a video of Cortinas' 2012 play "Bird in the Hand," about a Cuban-American teenager growing up in Miami.

"Memorialization" is another topic of focus, and will include a visit to the "still-developing space around the World Trade Center, to think about what memorialization means in 21st-century America," Hartog said.

Students will gain exposure to the various ways scholars approach different subjects dealing with America. DeLue explained: "An art historian attempts to understand the story of America by looking at its pictures, a scholar of literature seeks meanings in texts, a scholar of the law pays attention to the nature and outcome of legislation and court cases, and a musicologist looks for insight in American music."

The course will center on conversation-style lectures — two or more of the faculty will be "in conversation with one another, working to make sense of a shared problem," Hartog said.

The course had a test run last spring with a small seminar of 14 undergraduates co-taught by Cheng and Hartog. "'Reinventing American Studies' was an exploratory and experimental mini-model of the new course," Cheng said. "We tried many things, including giving the students opportunities to determine some of the contents of the course, as well as trying untraditional assignments. The experience was wonderful and enlightening."

Said DeLue, "We want our students to come away from the course with a sense that the complexity of the present — from immigration, health care and presidential politics to gay marriage, the globalization of Wall Street and the war on terrorism — is a product of the past, that where we are now is a function of where America has been."

All three instructors agree that the course is relevant for every student at Princeton, regardless of whether they intend to earn a certificate in American studies. "The course will greatly expand participants' understanding of America, then and now, while fostering skills of rational analysis and critical thinking immensely useful for other courses, other fields of study and perhaps, most importantly, other walks of life," DeLue said.

"We want the course to be exciting and fun and experimental and imaginative," Hartog said. "We believe that it is important for students across the Princeton campus to think hard about the America they are living in. One of the key questions that emerged from the 2008 diversity workshop and that guides this course is: What should every Princeton student, upon graduating, know about America? That is, what should we have given the students so that they might leave Princeton and become the best citizen — or global citizen — that they can be?"