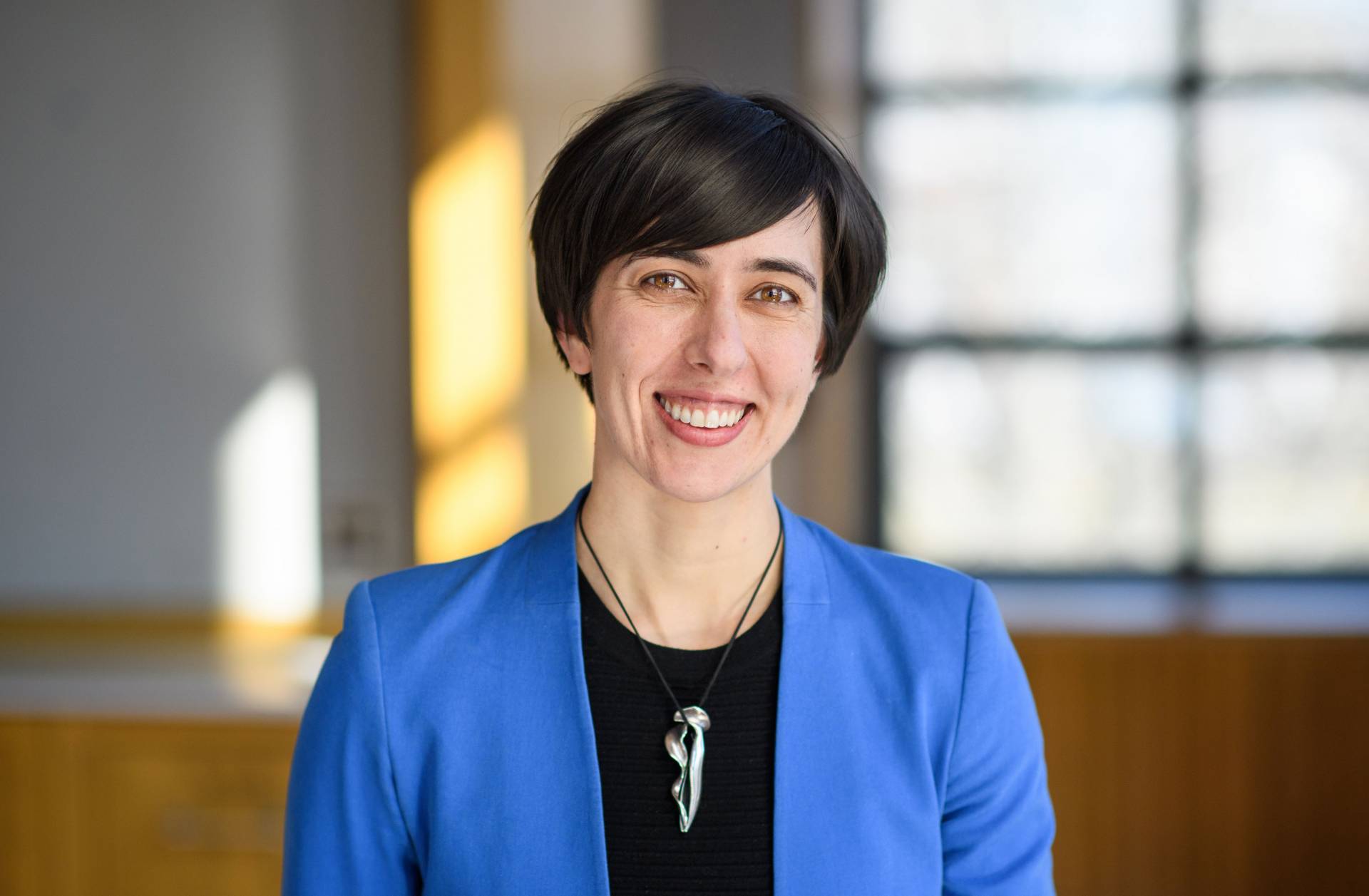 Alisha Holland, an assistant professor of politics at Princeton University, went to Colombia, Chile and Peru to conduct research for her first book, "Forbearance as Redistribution: The Politics of Informal Welfare in Latin America" (Cambridge Studies in Comparative Politics, 2017), which grew out of her doctoral dissertation at Harvard University. Holland studies the comparative political economy of development, with a focus on Latin America, urban politics and social policy.

While at Princeton, Alisha Holland, a 2007 alumna, wrote her senior thesis on the political and legal responses of Central American nations to rampant gang-related violence, and traveled to El Salvador and Guatemala to conduct fieldwork.

Then, she said that she intended to return to Latin America after graduation — and she did.

Now an assistant professor of politics at Princeton, Holland went to Colombia, Chile and Peru to conduct research for her first book, "Forbearance as Redistribution: The Politics of Informal Welfare in Latin America" (Cambridge Studies in Comparative Politics, 2017), which grew out of her doctoral dissertation at Harvard University. Holland studies the comparative political economy of development, with a focus on Latin America, urban politics and social policy.

"Forbearance as Redistribution" draws on intellectual passions that she has been nurturing since she was an undergraduate: for the law, social policy and inequality.

As a student, Holland was awarded the University's Moses Taylor Pyne Honor, the highest general distinction conferred on an undergraduate. She majored in the Woodrow Wilson School of Public and International Affairs and earned a certificate in Latin American studies. Holland co-founded the Latin American Studies Student Organization and helped start Princeton Against Protectionism, a group dedicated to promoting freer trade in food. 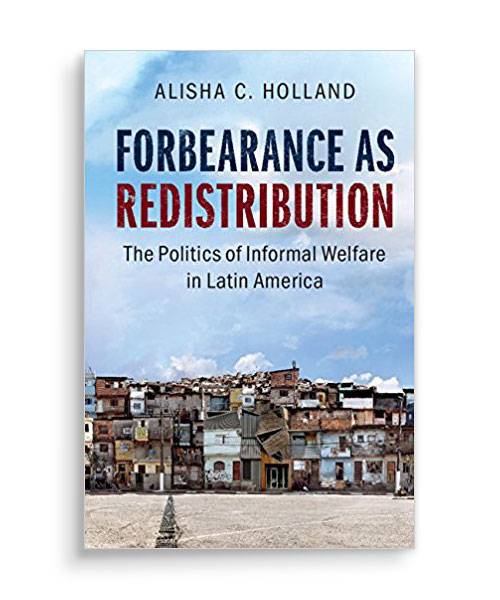 In "Forbearance as Redistribution," Holland examines why and when Latin American governments tolerate legal violations by the poor, such as squatting, street vending and basic service theft.

In "Forbearance as Redistribution," Holland examines why and when Latin American governments tolerate legal violations by the poor, such as squatting, street vending and basic service theft.

She answered questions about her book and returning to Princeton to teach.

Why did you write this book?

I wrote this book to improve our understanding of social welfare provision in developing countries. We often think of social welfare in terms of formal government programs, such as cash assistance, unemployment programs or housing assistance. By these measures, most Latin American governments do very little for their citizens. Only recently have there been large pushes to target social benefits to the poor. But there are other ways that government actions can shape the poor’s welfare, or what I call informal welfare policies, such as tolerating informal street vending as a form of employment or squatting as a way to get housing. I wanted to understand when and why politicians relied on these others forms of social assistance.

You are interested in the comparative political economy of development with a focus on Latin America. Why Latin America?

I’m interested in Latin America for a combination of personal and intellectual reasons. My father grew up in Panama, and I first started to think about how politics worked differently visiting my relatives there. Many of my intellectual interests also lie in trying to understand the politics and consequences of inequality. Latin America is one of the most unequal regions in the world, and so it’s a really important region to think about the origins and persistence of social disparities.

Your research focuses particularly on urban politics and the cities of Latin America. Why?

Cities fascinate me due to their density and their growing political importance. When large populations live in constrained areas, the need for laws and social norms to harmonize their behavior increases. You start to see conflicts over how to use space and who can occupy space. I think of these as the everyday ways in which inequality matters and changes — do the rich and poor occupy the same locations? And what happens when their paths cross?

Since the 1990s, city governments also have gained importance in many developing countries due to a process of decentralization. Administrative and fiscal functions that once were carried out at the national level now take place at the city level. Voters elect mayors, who are really important political figures in their own right and make many important decisions about how laws are enforced.

What was your research process?

I spent about a year conducting research in three Latin American cities — Bogotá, Colombia; Lima, Peru; and Santiago, Chile. While there, I conducted interviews with bureaucrats and politicians, trying to understand what enforcement even looks like in practice and how politicians make enforcement decisions. I also collected statistical and archival data on enforcement activities. Especially when studying informal and illegal behaviors, it’s hard to rely on any single data source so I tried to triangulate between different actors and records, blending together statistical data on public attitudes, enforcement actions, interviews and archival data.

One of the things that surprised me most was the role that satellite imagery has started to play in enforcement in developing countries. Many bureaucrats actually monitor new land invasions and street markets directly from Google Earth images, and then politicians need to decide how to act.

You introduce the concept of forbearance. What is that and why is it a useful concept?

Many scholars and policymakers assume that many problems in developing countries arise from a lack of state capacity. For instance, informal economies exist because there are too few police and bureaucrats — or those that exist are too corrupt or lazy — to enforce the law. I use the term forbearance to refer to intentional decisions not to enforce the law. The goal is to show that there is a complex politics behind law enforcement decisions. Of course, the reasons that politicians use forbearance will vary. When we’re talking about laws that the rich tend to violate, like tax codes, politicians may want bribes or campaign contributions in exchange for forbearance. My book focuses on laws that the poor tend to violate, such as squatting, street vending and service theft, and argues that politicians use forbearance to win votes.

Why do some politicians allow the poor to squat, vend or steal services, while others enforce against these legal violations?

I focus on the ways that electoral districts are drawn. In some cities in Latin America, politicians run for office in districts composed primarily of low-income voters who directly benefit, or indirectly sympathize, with forbearance. These politicians are most likely to forgo enforcement. Other politicians run for office in areas that are largely middle class. Middle-class groups overall tend to be more interested in having a clean, modern city and prefer greater enforcement. The other major factor that shapes politicians’ decisions is the welfare programs that are available to assist low-income groups. Politicians are more likely to enforce the law when they can offer those affected access to government housing, jobs or electricity programs.

Is the phenomenon of forbearance confined to Latin America? It what other contexts is this a useful concept?

The idea of forbearance can apply to many different situations, including politics in the United States. There are many laws that go unenforced, from laws against immigration to marijuana use to sodomy. In some cases, the government lacks the capacity to enforce these laws. But in many cases, limited enforcement reflects electoral decisions about the popularity of law enforcement.

It’s a tremendous joy! Princeton students are incredibly smart and creative, and I love sharing notes on our experiences of the University. It’s also been a very special year to teach comparative politics. Even more than when I was an undergraduate, many students are thinking about how to participate in politics. It’s the perfect moment to ask big questions — which are at the heart of comparative politics — about what democracy means, how inequality affects politics, and how governments affect our everyday lives.